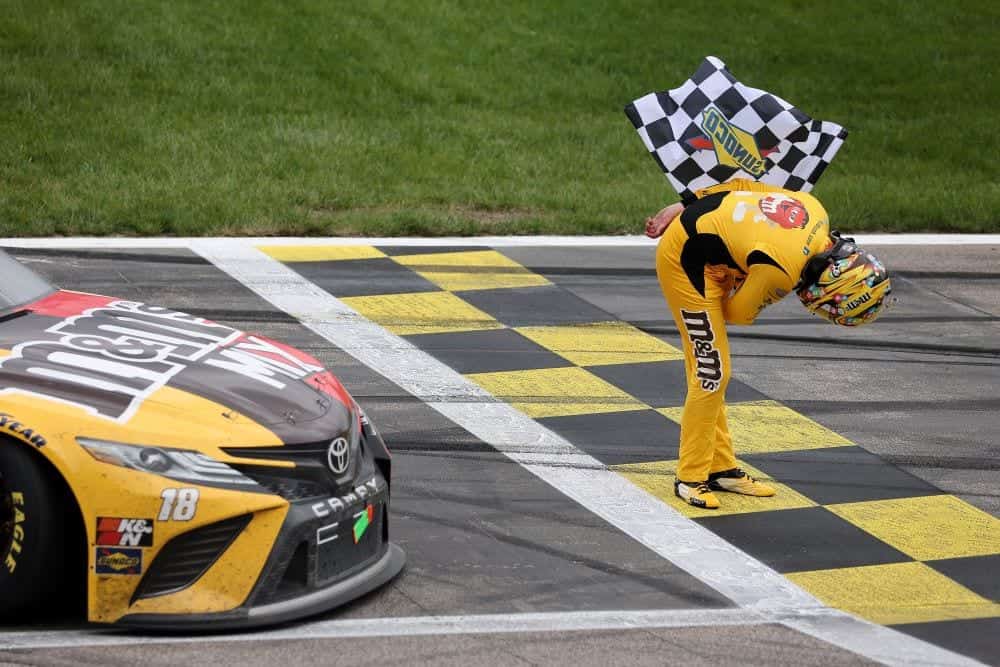 Kyle Busch won on his birthday at Kansas Speedway Sunday (May 2) afternoon, keeping his streak of consecutive seasons with a win alive at an astounding 17 years. The victory alone should scare his competition, considering it took until the waning weeks of 2020 for the No. 18 team to visit victory lane. It also completed a sweep for Busch of the weekend’s two races after he won Saturday (May 1) night’s WISE Power 200 at the 1½-mile oval.

It was also apt that a Busch went to victory lane in the meme-iest race name of all time, the Buschy McBusch Race 400, and additionally seemed fitting that Busch capped off a week of personal hardship for he and wife Samantha with a positive note. The couple, who continue their battle with infertility, were unsuccessful in their most recent attempt at a pregnancy, as revealed by Samantha earlier in the week.

A dominant Kyle Larson, looking for his second win of 2021, led 132 laps, but late-race shenanigans on a restart dropped him to 19th. Ryan Blaney appeared to be in position for a shot at the win, or at least a top-five finish, but those same shenanigans killed his chances.

First, it was the lack of yellow flags that pervaded the opening two stages and much of the third, with zero flying for anything other than stage breaks or scheduled competition cautions until there were less than 40 laps remaining.

Even when one did fly, it wasn’t without controversy – Chris Buescher stayed out longer than any other competitor during that stretch and led as everyone made their green-flag pit stops. Reddick’s crew lost one of their tires during their stop and could only watch as it rolled into the infield. NASCAR generally throws the yellow pretty quickly, but inexplicably waited until the No. 17 completed his stop and Larson cycled back to the lead.

After that, the cautions arrived like locusts: one for Denny Hamlin contacting the wall, one for a backstretch crash involving Ricky Stenhouse Jr. and Austin Cindric and one for a turn 4 wreck involving Stenhouse, Christopher Bell and Ryan Preece.

Even the final restart wasn’t without incident: Larson pushed Blaney deep into the corner and nearly turned the No. 12. Blaney saved the car, but that took the shot to win away from two contenders.

Brad Keselowski put together another strong run after his win last week at Talladega Superspeedway, leading 72 circuits and finishing third despite scuffling for position in the closing laps. Team Penske as a whole had an up-and-down day, with Keselowski and Blaney running well (Blaney was, at least, until the incident with Larson) while Cindric and Joey Logano ended up further back. Cindric, running occasional races in 2021 to prepare for his seat in the Wood Brothers Racing No. 21 next year, ran inside the top 20 most of the afternoon before the backstretch tangle with Stenhouse relegated the No. 33 to a 22nd-place finish. Logano’s bad luck after flipping last week continued as the No. 22 scored zero stage points, was never a factor and finished 17th.

Points leader Hamlin still sits atop the standings with a more-than-comfortable 87-point margin over Martin Truex Jr., but his race went south when battling Larson for the lead. Hamlin got back to the throttle too early, smacking the turn 4 wall and suffering damage significant enough to again send him into the outside barrier a second time – even harder this time – moments later. Hamlin stayed on the lead lap and bounced back to finish 12th.

Defending champ Chase Elliott was never up front battling for the lead but scored stage points in both segments and looked to have a fast car during the final restart. Keselowski drifted up high on that restart and blocked the No. 9 enough to kill any chance of a run for either car, but Elliott still came home fifth.

The caution for Reddick’s tire turned just about everything in the race on its head. Up to that point, Larson had gapped all of his competitors by multiple seconds and had cycled back to the front, but the yellow finally flew when Buescher pitted.

On the ensuing restarts, Hamlin got by Larson and ended up in the wall, the backstretch crash reset things again and then the three-car incident with Stenhouse, Preece and Bell ended a solid top-10 run for Bell.

The constant resets also gave Busch all the time he needed to clamber back to the front and secure the lead, and the final overtime restart gave Busch the clearance to run away with the win. Battles throughout the field behind him eliminated almost any chance of anyone catching back up, and Larson – who had been so dominant – had the brief moment with Blaney and both lost more than a dozen spots.

Darlington Raceway is one of the most unpredictable tracks on the Cup Series tour – at least that isn’t a superspeedway or short track. And, if that’s not enough: throwbacks! (In terms of Cup schemes, my favorite of those unveiled so far is either Aric Almirola‘s nod to Mark Martin – with original sponsor Winn-Dixie back on board – or Justin Haley‘s retro electric blue car emulating Robert Pressley’s Jasper scheme).

This weekend marks the first of two visits to the track for the Cup Series this year. Plus, two of the premier division’s most prominent drivers without a win so far this year – Hamlin and Kevin Harvick – both won there last year, and both of those drivers have three victories apiece at the “Lady in Black.”

How … is the playoff picture looking?

A grand total of 10 different drivers have won through the first 11 races of the season. The only repeat winner thus far is Martin Truex Jr.

The six remaining spots, at least before drivers start to be knocked out, could pretty much go to anyone. One would assume Hamlin, Harvick and Elliott will win at some point this season, so that’s three, but there’s an all-star cast of winless drivers – not just those who haven’t found victory lane this year but some who haven’t ever found victory lane – waiting in the wings.

DiBenedetto looks like he’s finally on track this year with that third straight top-10 finish and back-to-back top-five efforts. Buescher finished in the top 10 at Kansas and so did Reddick. Kurt Busch is also looking to continue his one-win-a-year streak.

Plus, Daniel Suarez and Team Trackhouse keep improving and chipping their way toward top-10 results, finishing 11th at Kansas. That’s their sixth finish inside the top 20 this season. Not bad for a new team.

And don’t count Michael McDowell out of a possible second win this year: he has eight top-20 finishes, including 13th in Sunday’s race, and excels at road courses and superspeedways, two configurations that still have a number of dates coming up.

It’s been an exciting two and a half months to open the season, and there’s still four full months to go. Buckle up.

Someone pointed out that if NASCAR automatically threw a caution every time there was a loose tire well out of the way, we might be seeing a lot more loose tires from teams that badly need a caution during pit stops. as long as the tire puts no one in danger, I think (for a change) that Nascar made the right call.

Throw it in real time, or don’t throw it at all. And where it was on the grass in this particular instance, I don’t think they should’ve thrown one at all in this scenario

Exactly – if truly a “safety” issue – it needs to be immediate. But they know, and of course we all know, that it is simply a lever for them to manipulate the race.