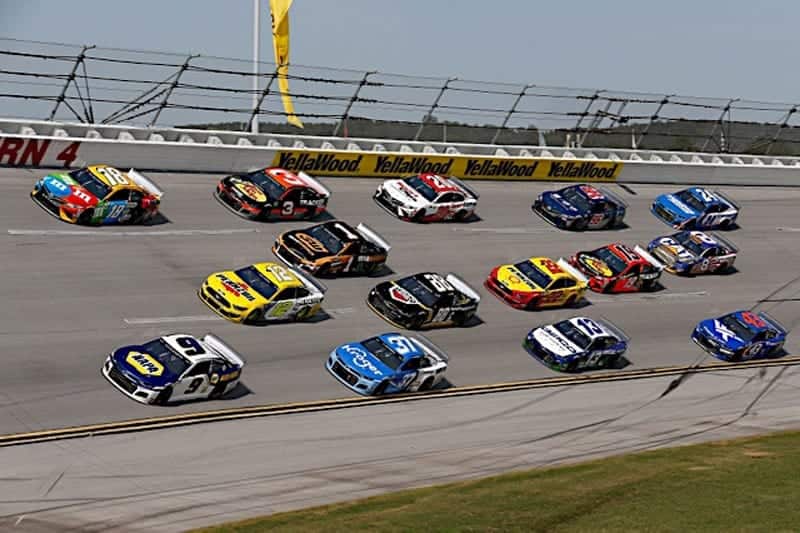 While most race fans are eager to see what will unfold this weekend (April 24-25), most NASCAR Cup Series drivers and teams will carry plenty of dread with them instead. Due to the high-risk nature of racing at the famed Alabama facility, getting swept up in the “Big One” is on top of everyone’s list of things to avoid.

For drivers who have checked off a win this year, they can go with one of two options: stay safe and ride around in the rear of the field or take bigger chances in a quest for another victory. But for playoff-caliber drivers who started the 2021 season in a bit of a slump, they can use this weekend as a prime opportunity to catapult themselves out of the holes they’re in and into postseason contention.

Here’s a list of drivers most likely to do just that.

It’s rare to see the performance of Aric Almirola be so off so early in the season. At this point last year, Almirola had posted three top-10 finishes and sat 11th in the standings. Now, he only has one top-10 result (Richmond Raceway), an average finish of 23.6, three DNFs and currently sits way down in 27th, just one spot ahead of rookie teammate Chase Briscoe. Considering how strong he’s been in past seasons with Stewart-Haas Racing, the first quarter of 2021 is going to be one he’ll want to forget.

But what Almirola has up his sleeve is a superspeedway finesse that few other drivers have. He beat Joey Logano to win the first qualifying Duel at Daytona International Speedway in February. He is a winner at Talladega in both the NASCAR Xfinity and Cup series and scored eight consecutive top-10 finishes at the track prior to being wrecked out of the lead in the fall 2020 race.

If Almirola is running in the top 10 on the last lap, you can bet on him doing his best to make a surge up to the front and potentially bring his winless streak to an end.

If there’s any driver who yearns to have a better year than 2020, it’s Ryan Preece. Last season consisted of a 29th-place points finish, just two top 10s and three consecutive last-place finishes, all on top of his brutal crash at Kansas Speedway in July.

Preece had a good trip to Daytona to start the 2021 season, finishing sixth in the Daytona 500 and ninth on the road course. However, he has had only one top-15 finish since then, which came at Las Vegas Motor Speedway. He now sits 21st in the standings to go along with his 20.6 average finish.

But Preece has done a masterful job of playing the dark horse at superspeedway tracks. He finished eighth in his first Daytona 500 back in 2019. Two months later, he scored a career-best finish of third at Talladega. Even during some down years, his last two superspeedway results have been 10th and sixth. If Preece can put together another survival run at Talladega through at least the white flag, he’ll be in a perfect spot to go after his first Cup win.

Even though he didn’t win the 2020 Rookie of the Year award, Tyler Reddick consistently found ways to be the top rookie in several races and fight for wins in a couple of them. Unfortunately, that momentum has slowed down dramatically for the 25-year-old sophomore driver from California.

Reddick does have three top 10s, including a career-high second place at Homestead-Miami Speedway. However, several crashes and brushes with the wall have hurt many of his other races. After nine starts, he’s left with an average finish of 19.9 and sits 22nd in the standings.

But like Almirola, Reddick has a knack for performing well on superspeedways. He has three superspeedway wins between the Camping World Truck and Xfinity series, two at Daytona and one at Talladega. Over in Cup, he led 19 laps in the spring 2020 race but wrecked on the final lap. In the fall 2020 race, he finished seventh with a beaten-up racecar. Maybe he can put his superspeedway flair to good use and finally score that first Cup win.

Both Bubba Wallace and 23XI Racing have had plenty of hype and excitement surrounding them prior to the 2021 season getting underway. But even though they’ve had fast cars at times, the results at the checkered flag just haven’t been able to come for them yet.

Wallace has been in position to do well a few times, at least until misfortune fell his way. He was a contender for much of the Daytona 500 before having to pit for a vibration with less than 20 laps to go, finishing 17th and ending up involved in that massive last-lap crash. He lost many laps at Las Vegas after pitting under green to fix mechanical issues. He was in contention for a top-10 finish on the dirt at Bristol Motor Speedway before suffering a flat tire and spinning. These and more problems currently leave Wallace with a 21.6 average finish and a 20th-place points ranking, with his best result being 16th on three occasions.

But if you recall, Wallace can be deceptively good at these superspeedway tracks. He has two career top-five finishes at Daytona and was leading coming to the line in February’s second Duel qualifying race before Austin Dillon nipped him at the finish. At Talladega last fall, he led for 10 laps and stayed in the hunt until getting wrecked out with two to go. A top-10 run, or even a win, at Talladega would quickly turn things around for Wallace and the 23XI team.

The “Watermelon Man” is nine races into his first official full-time Cup season for Chip Ganassi Racing. So far, though, it’s just been OK.

Ross Chastain started out the year well by finishing seventh in the Daytona 500. But results have plateaued for him since then. He crashed out the following week at Daytona’s road course, further continuing the curse of McDonald’s cars failing to end up in victory lane. As of Richmond, he has finished no better than 14th since Daytona and currently sits 24th in the standings, posting a 20.7 average finish.

Chastain only has two career top-10 finishes, coming in the 2019 and 2021 Daytona 500s. If he wants to tack on a third, and maybe more, Talladega would be a good place to make it happen. He is a past Xfinity winner at Daytona, also contending for the victory in several past Xfinity and Truck races at Talladega.

Chastain’s pulled off a clutch win for Ganassi once before, in NXS. Should he play his cards right and end up winning Sunday, you may get to see a watermelon-smashing celebratory show like no other.