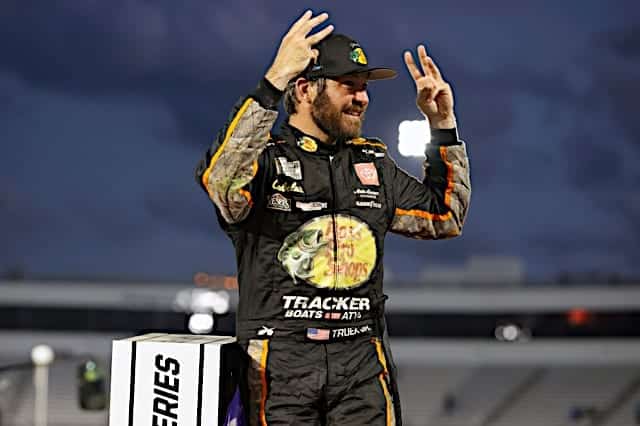 If the stats tell the story, then it seems that Martin Truex Jr. has suddenly turned into short-track ace. In his first 80 Cup races on tracks under a mile in length, Truex won exactly zero. None. Then, after finally breaking through at Richmond in 2019, he’s taken home the trophy in five of his last 12 short track events. Quite the turnaround.

This type of monumental shift in performance isn’t completely unheard of. Sometimes it just takes a guy a few (or 80) times to get the hang of a certain type of race track. Take Kyle Busch, for example. The first few road course visits for Busch were miserable. He never finished better than seventh on a road course during his first three years at the Cup level. Then in 2008, he swept the road course races at Sonoma and Watkins Glen. Now he only has one finish worse than seventh at either track in the last five years. Some times it just takes a bit to figure things out. Anyway, here’s some more numbers worth highlighting.

Truex has now won a race at Martinsville in three consecutive years. The last driver to accomplish the feat was the one he passed for the win on Sunday, Denny Hamlin. Hamlin won at the half mile track from 2008-2010, the last of which ended Jimmie Johnson‘s four-year winning streak at Martinsville. Darrell Waltrip also had a four-year run of visiting victory lane at the track from 1980-1983.

However, this is all child’s play when it comes to the all time record of consecutive years with a Martinsville win. Not surprisingly, the king himself, Richard Petty owns that title. Petty took a grandfather clock (or two) home for seven years in a row, from 1967 through 1973.

Two teams, Joe Gibbs Racing and JR Motorsports, both put four cars in the top 10 at the finish of the Xfinity Series race on Sunday. It’s a unique feat that had never taken place before in the history of the tour. Granted, the opportunities have been somewhat limited, as four-car Xfinity teams are a relatively new phenomenon. However, two teams have comprised seven of the top 10 drivers before. Just never eight. Only Austin Cindric (Team Penske) and Justin Haley (Kaulig Racing) managed to find space among the JGR/ JRM onslaught.

Speaking of the JGR and JRM Xfinity Series efforts, each team has a driver with a win even though neither driver is running a full-time schedule. Granted, drivers racing part time in Xfinity is nothing new. However, usually part timers who win are Cup Series stars dabbling in the lower division for assorted reasons. Josh Berry and Ty Gibbs are two part-time Xfinity drivers who already have wins, hogging a bit of the action from drivers who need the playoff points that come with winning.

Berry came from the 29th starting position to score his maiden win, the furthest back any driver had ever come from to get an Xfinity win at the paperclip-shaped oval. The previous record had been Tommy Houston coming from 27th to first in 1989.

The races at Richmond, site of the next event on the Cup schedule, have been swept each of the last three years. Or have they? Kyle Busch did win both races in 2018, just as Truex did in 2019. However, due to the rapidly adjusted schedule last year, one Richmond race was dropped from the schedule. So while Brad Keselowski was indeed the only winner at the 0.75-mile oval last year, there was only one race to be won. So I’d say one could hardly consider it a sweep.

Speaking of success at Richmond, drivers who win there in the Xfinity Series seem destined for Cup glory as well. From 2004 through 2019, every one of the 32 races at Richmond was won by a driver who already had at least one Cup win or has picked one up since then. Justin Allgaier claiming victory in both rounds of the doubleheader last fall ended the streak. Or at least it did until Allgaier gets another shot at a Cup win.