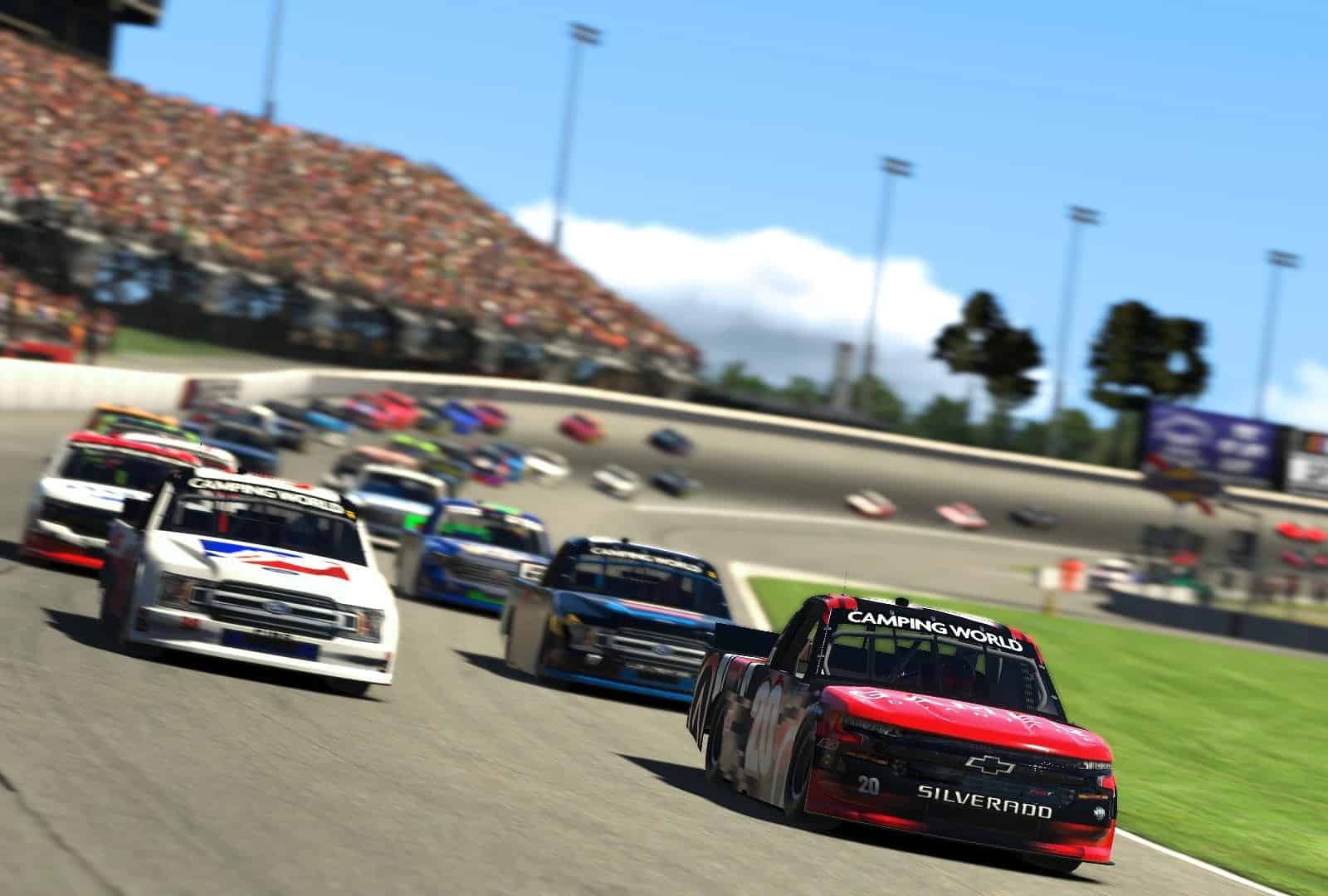 It’s all about Atlanta Motor Speedway this week in this issue of The Virtual Frontstretch. All three of the leagues covered this week all went down to virtual Hampton, Georgia for three vastly different events. They weren’t the biggest races of the week, but they did provide drama and excitement in their respective communities.

The eNASCAR Coca-Cola iRacing Series and the iRacing Road-to-Pro Qualifying round were both off this week, and that gave the spotlight to the real life Cup Series drivers instead.

Thursday featured the second leg of the INDYCAR Challenge, where Joy Tomlinson explains how Sage Karam was able to outsmart his opponents in the caution-free, 100-lap event at Homestead-Miami Speedway.

Let’s see how some of the community races went this week, starting with the championship race for Monday Night Racing.

David Schildhouse started on the pole position, battling early with Alfredo for the top spot. Alfredo eventually lost connection to the server due to computer issues. Race control was able to get Alfredo back on the lead lap through multiple caution periods, but on the final run, his computer gave out once more and ended his chances at the title.

Pardus and DeGroot both fought valiantly, but Rodgers had the overall pace throughout the race with Alfredo out of the equation. The final run saw Rajah Caruth take the lead and score the victory over Ryan Vargas. Rodgers ended the race back in third, more than good enough to secure the championship.

With the second season now complete, the third season of Monday Night Racing is right around the corner. Partnering with Alfredo, the Esports Racing League becomes the official feeder series to Monday Night Racing. More information about that can be found later in this column.

Utilizing the legacy Car of Tomorrow for the third time in the 2021 season, the FTF Cup Series took their talents to Atlanta for a test of wits for the Kickin’ The Tires 500k.

Will Norton collected the pole position for the first time this year and led the field to the green flag. However, he did not lead the first lap. Conor Horn took that distinction, leading for a handful of circuits before giving way to Kollin Keister.

Keister went on to sweep the entire event, winning both stages and taking the checkers after 197 laps. Kevin King, Michael Guest and Horn all stayed in contention through the race, but Keister was too strong on the short run.

“I like this track and this car,” Keister said. “I was hoping that we would get a couple more long runs, but it is what it is. We were able to have pretty good battles there, but passing on the inside was a pain.”

Take a look at how things look following Atlanta week for both CUP and fgnspbbv.#FTF pic.twitter.com/3x9EAMTHFB

Powered by two entire ham sandwiches that he had for lunch, Keister’s victory moves him up into second behind Norton in the driver standings. Keister is tied on top of the playoff grid with Guest as both drivers own two wins apiece.

Saturday nights are home to the 100% Cup Series, a full-length league that runs the iRacing NASCAR Cup Series cars following the same schedule as the real thing. Last week, the series had its sixth race of the season at Atlanta, 325 laps around the virtually worn-out pavement.

28 drivers took the green flag for what became a series of long green-flag runs. The race was slowed by just three caution periods for 11 laps, the first of which came on lap 2. The only other yellow flags came for prescheduled stage breaks.

Jon Dulaney took the first stage and Bryson Hixenbaugh held off Adam Benefiel in the final lap of the second stage to win.

The battle for the lead was split by Dulaney and Hixenbaugh, with Benefiel in striking distance as well. At the end, Hixenbaugh claimed his first victory of the season, leading the most laps at 157. Dulaney was there with about 30 laps to go but faded back to finish third behind Benefiel.

Hixenbaugh takes over the driver’s standings lead by a single point over Dulaney leaving Atlanta. Benefiel leads the series with three wins in five starts.

Things are going to get a little dirty around the community this week. As the NASCAR Cup Series and NASCAR Camping World Truck Series both race at the real Bristol Motor Speedway Dirt Track, so will many leagues around the iRacing community.

FTF Racing’s DIRT ventures will take place in the NASCAR Xfinity Series cars. They’ll first run on Saturday night with the FTF Grand National Series presented by Barr Visuals, and then they’ll go again in the Cup cars on Sunday night at 8:00 p.m. ET on BottomSplit.

That event might have a special guest. Prior to the Pro Invitational Series, William Byron was spotted at a test session for FTF’s race this weekend, winning the 70-lap practice race and a small prize from one of the FTF administrators.

Congratulations to @WilliamByron for winning Kyle Riley's $5 prize tonight! Thanks to everyone for showing up for our Sunday Cup test tonight. We got valuable information tonight for FTF's first venture onto the dirt this weekend!

Monday Night Racing won’t return until May, but until then, the Esports Racing League will return for their third season, drastically different than the first two. The main pull for ERL season 3 is the introduction of an iRating cap of 5500. No driver above 5500 can sign up or compete, allowing for drivers 5499 iRating or lower to compete in a five-race series. The champion will be invited to run full time in the Monday Night Racing league against drivers such as Alfredo, Ron Capps, Kyle Busch, as well as some of the media folks like Michael Massie and myself.

Esports Racing League will also follow a similar format to Monday Night Racing, utilizing various vehicles at different tracks. The first event this Monday at Richmond Raceway, along with the entirety of the season, will be broadcasted on Podium eSports.

Road-to-Pro Qualifying Series, where the best oval drivers not in the eNASCAR Coca-Cola iRacing Series compete for a chance to make the top series, won’t return until April at Richmond Raceway.

Finally, the Mooncar Premier Series is also slated to begin in April. Mooncar Series Director Travis Brown and his moon team have all selected the drivers competing in the Premier Series, but will hold a qualifying series first to determine the final driver list for the event. All of that information can be found on the Moonvision website.