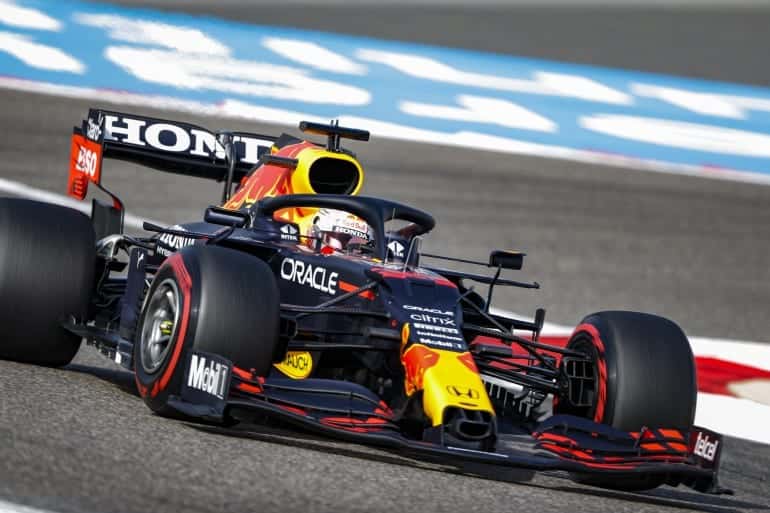 Red Bull looks like the car to beat in Bahrain (credit: FIA images)

Max Verstappen will start from the pole for the 2021 Formula 1 season-opening Bahrain Grand Prix.  The battle the sport needs started to take form on Saturday (March 27) when Verstappen beat Lewis Hamilton at the end of qualifying by almost four-tenths (0.388 secs).

Hamilton will start second with his Mercedes teammate Valtteri Bottas sitting in third.  Last year’s Constructor’s champion had looked troubled through much of the weekend but again was able to either shed its issues or had simply been tinkering the whole time.  Sending Hamilton and Bottas to the second and third slots shows Mercedes is already in recovery mode.

Charles Leclerc made Ferrari look good by qualifying his car fourth in what should be considered a small surprise.  Pierre Gasly seemed to continue with where he left off last year by slotting his Alpha Tauri in fifth.

Daniel Ricciardo, in his maiden qualifying effort for McLaren, will start sixth.  Ricciardo had looked off the pace compared to teammate Lando Norris for much of the weekend but laid down the kind of lap he needed in Q3. Norris will start just behind Ricciardo in seventh.

Carlos Sainz, another driver qualifying for a new team (Ferrari), failed to match his teammate Leclerc’s outstanding effort and will start eighth.

Fernando Alonso took the ninth spot for newly-named Alpine Racing.  Alonso has looked solid so far in his return to F1 and if ninth is how he is starting the year, there is good reason to expect to see him higher up the charts as the season progresses.

Rounding out the top 10, in what must be considered a bit of a disappointment, is Lance Stroll.  Aston Martin Racing, which had been Racing Point last year, should have put forth a better result but instead, the car looks like it has regressed from 2020.

– Another driver making his debut for a new team was Sebastian Vettel, and unfortunately, he seemed to perform about as well as he did for Ferrari last year.  Though his Aston Martin does not look to be running at optimum performance, Vettel could not even muster getting out of Q1.  Sure, Nikita Mazepin’s spin brought out local yellows that may have impeded Vettel’s lap, but he should have been able to post a time before the incident that would have kept him out of trouble.

Cyril Abiteboul has been thrilled to have the four-time champion join the team, but at some point, Vettel is going to have to show he still has the skills to hold a seat at a decent organization.  Perhaps this qualifying session will be just a one-off, but Aston Martin will look troubled if not.

– Sergio Perez and Yuki Tsunoda launched their careers with Red Bull and Alpha Tauri, respectively, during Bahrain qualifying.  Neither one of them showed the speed they had during earlier practice sessions.

For Perez, Red Bull made a strategic blunder by leaving him out on intermediate tires and putting him in traffic.  Rather than having a clear path to laying down a fast lap, Perez muddled his way through and failed to make it out of Q2.  He will start 11th.

Tsunoda is a stellar young prospect who looked great through practices but could not turn up the proverbial wick for qualifying.  Starting 13th, rising into a points position is not an out-of-reach goal for the rookie Japanese driver. But with Gasly taking off from the fifth spot, Tsunoda is getting a quick assessment of how far he has to go.

– In what definitely comes as a bit of a shock, Esteban Ocon will start 16th.  Um, what?  That’s right, Ocon, who is returning to the car that he drove last year, and for a team that has continued to pump money into its program, failed to make it out of Q3.

What makes his poor qualifying result look so bad is that his teammate just spent two years outside the sport and is 15 years older.  Sure, Alonso is a rare talent, but Ocon should have been able to best him in season-opening qualifying, right?

– What is not so shocking is that both Williams Racing and Haas look to be backmarkers again.  Williams has more potential to score a surprise result as the team has spent big to become competitive again.  It may take much of the season, but the team seems to be giving off different energy.

Haas, on the other hand, is merely trying to eke its way through the year to get to 2022.  The reason for such malaise has to do with how payouts are distributed once the new Concorde Agreement goes into effect.  When the money is being allocated with a touch more equanimity, Haas stands to gain a much bigger payday that will prove valuable in pushing forward.

Predictions for the Bahrain GP

Alex Gallacher: For Bahrain, I’ve decided to think outside the box and go with a driver who isn’t Lewis Hamilton to win on Sunday. It was an easy choice, the guy who won the last time F1 was in Sakhir: Sergio Perez.

Now driving for the second-best team in all of F1, I expect Perez will want to impress in his first outing with Red Bull Racing. While I believe that Mercedes was, in fact, sandbagging in testing, Red Bull is still a strong team that beat Mercedes twice last year.

My surprise storyline is, I believe, Williams will finally get their first points in almost two seasons. A lot of attrition usually occurs in the first race and, last year, Nicholas Latifi was one position from the points in Austria. With the added money and new Mercedes parts, I think it will be one of the two coming home with a P10 to score Williams a hard-earned point.

Ava Ladner: It’s hard to see anyone other than Max Verstappen winning.  He has been driving the whole weekend like his pants are on fire and there is little reason to think that he is going to slow down now.

The surprise will be Tsunoda earning points during his first F1 race.  While such a prediction may not be that wild, given that he is driving an Alpha Tauri, Tsunoda still has to get through the event intact and gain positions while doing so.  For a rookie, that might be more challenging than expected.

Alex Gallacher: In terms of the season, Mercedes will get the Constructor’s title easily for the eighth year in a row. But, going out on a limb, I will say Max Verstappen stinks up the show for the Silver Arrows and steals away the driver’s title from Hamilton as we all know Bottas won’t be competing for it.

Ava Ladner: I’m going to flip the script.  I believe that Red Bull will score the team title and Hamilton will eke out another driver’s championship.  The Red Bull lineup is strong enough to best Mercedes, but Verstappen consistently beating Hamilton seems like a bit of a stretch.