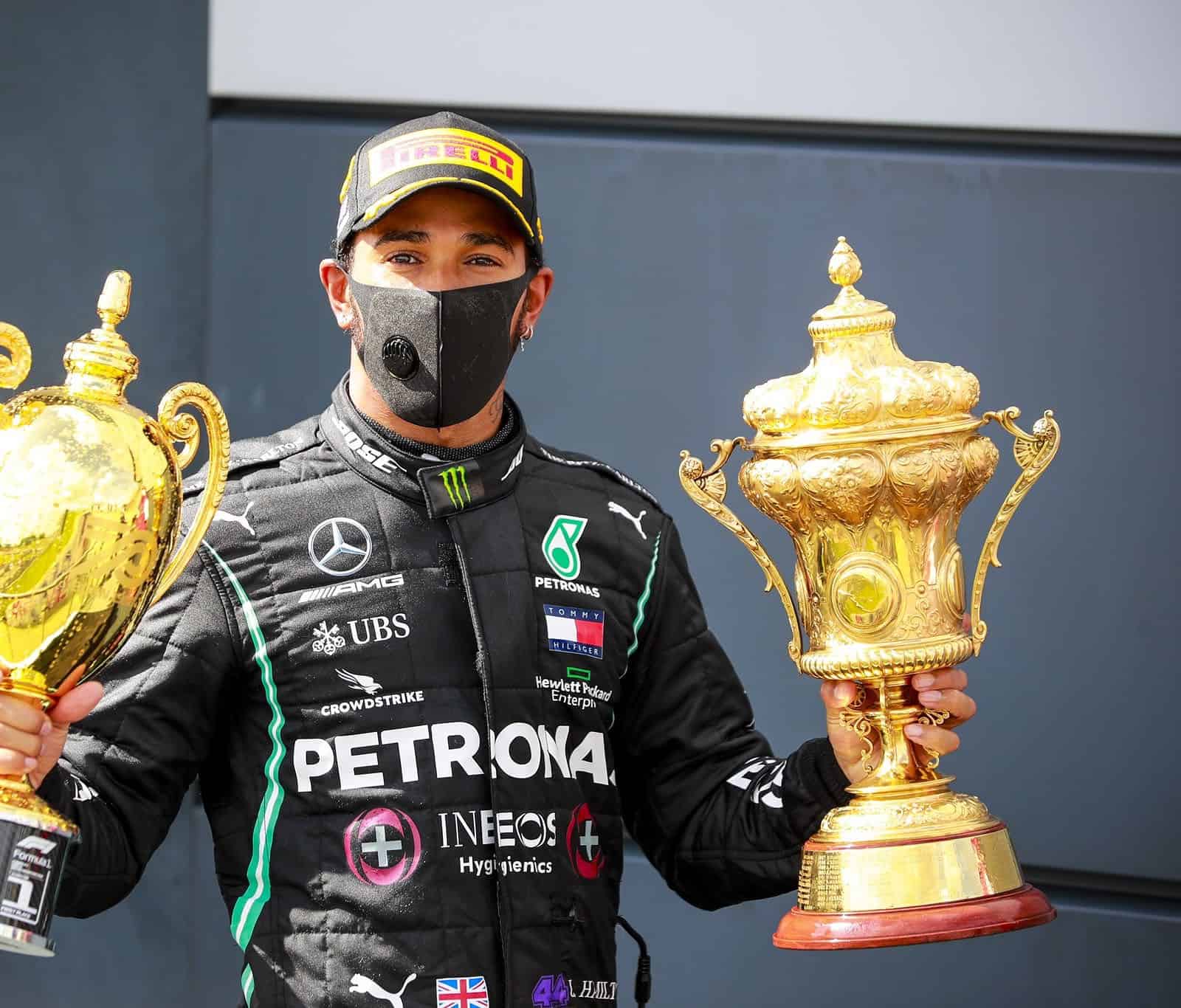 Lewis Hamilton holding the trophy for his British GP win and Driver of the Day award (Photo: Mercedes AMG)

Editor’s Note: This article on the 2021 Formula 1 season is posted in collaboration with an outside sponsorship client. The opinions and information contained within do not necessarily represent Frontstretch and its staff.

The 2020 Formula 1 season can easily be described as a “do with what’s given” type of year. But now, the season is long behind us and Lewis Hamilton has secured yet another World Driver’s Championship title to add to his ever-growing list of accomplishments. As the 2021 season dawns, let’s take a look at what’s to come for F1 prior to the Bahrain Grand Prix.

All the best online sportsbook places already have Hamilton and his Mercedes-AMG Petronas F1 Team at the top of the odds list of drivers and teams to beat, for obvious reasons. But until the engines are turned on and the cars are lined up, it’s anybody’s race to the top.

What could be in store for some of the top teams in F1 this year? Start your engines and find out below.

Remember a time where Mercedes didn’t dominate the F1 racing world? You would have to go all the way back to 2013. As of 2014, everything that involves winning in F1 has Mercedes written all over it. Their cars have always been strong,  plus Lewis Hamilton remains as their top driver, so what could honestly go wrong for them?

The 2021 season, though, can be a year when Mercedes truly can see their reign get messed with. Hamilton’s supporting cast is weaker and might not make the cut to help the team to yet another constructor’s championship win. Take Hamilton out of the equation and you have a team with great cars but an underwhelming second driver in Valtteri Bottas. An eighth title for Hamilton is easy to predict, but Mercedes winning the constructor’s championship is not, especially with Red Bull Racing coming on so strong.

Here is where there’s money to be made if you’re looking for a bet with a strong threat to Mercedes. By adding Sergio Perez to the team to race alongside Max Verstappen, Red Bull Racing has evolved into one of the strongest driver lineups on the circuit.

While Verstappen, who carried the heavy lifting for Red Bull during the 2020 season, may not have enough to beat out Hamilton, he’ll give the F1 superstar a run for his money. Additionally, the Honda engine these cars will be geared up with and the aerodynamics in their chassis will surely give them an edge in the constructor’s championship. You could even go as far as to pit them as favorites for the 2021 title.

F1 racing fans always fondly remember the days of Ferrari as the head honchos in the racing world. With Michael Schumacher, Fernando Alonso, Kimi Räikkönen, Felipe Massa and Rubens Barrichello at the helm, the “Il Cavallino Rampante” team was a shoe in for success year after year. After a 2020 season, though that was underwhelming for the Italian giants, with 2021 have come a series of changes.

In this case, those adjustments look to be for the best. By dumping Sebastian Vettel for Carlos Sainz, pairing him with the young Charles Leclerc, the Italian racing team is already looking at an upgrade that will start to show in 2021 and will most likely make a strong splash come 2022. They might not be strong enough for a championship run, but they will surely light up the courses and provide some quality competition for the middle of the pack.

Renault is coming back for yet another season but this time under a new name, Alpine Racing. With Daniel Ricciardo leaving for McLaren, something had to be done along with the name change in order to cause a true splash.

So what did Alpine Racing do? They called back Renault’s best ever driver, Alonso, to come back and do what he does best: race and go for gold. Having a seasoned star like Alonso come and pair up with Esteban Ocon can easily take the team to new heights in the championship standings.

What fans should keep an eye on is if Alonso and Ocon can click immediately to deliver consistently solid results. It will all come down to if Alonso, a Spanish racing legend, is ready to be a positive influence instead of a controversial figure causing drama within the program.

We’ll just have to wait and see.