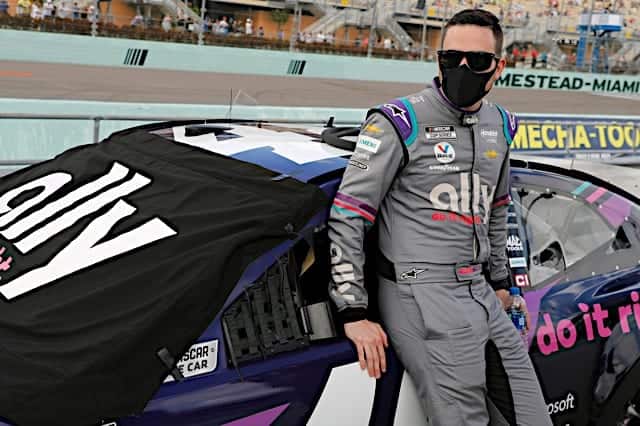 NASCAR Cup Series drivers might need a good laundry detergent to clean up their firesuits after March 28 is over, because they’ll be racing in the dirt. Let’s get your fantasy NASCAR DraftKings lineups ready for this weekend’s 2021 Food City Dirt Race at the Bristol Motor Speedway dirt track.

This race marks the first time in over 50 years since the Cup Series competed on dirt. However, many drivers have prior experience on this track type which will make it easier for them to adjust. Some raced at Eldora Speedway in the Camping World Truck Series, while others have sprint car and dirt late model backgrounds. There’s even a few dirt ringers entered for the Food City Dirt Race, as well as Cup drivers in the Truck Series race the day before.

Also, guess what’s back for the first time since the Daytona 500? That’s right; practice and qualifying has returned for this weekend. The Cup and Truck series both took on the half-mile circuit in a pair of practice sessions Friday (March 26). Saturday will feature heat races that will set the fields for each event, so pay attention to the results. Also, no matter where Kyle Larson qualifies, he’ll have to drop to the rear before the start of Sunday’s race after his Hendrick Motorsports team changed engines Friday. Keep that in mind while making your lineups.

Weather will also likely play a factor this weekend, as rain is expected for both Saturday and Sunday. A rain-shortened race or the threat of precipitation will only make drivers more aggressive in an unpredictable race.

While there’s a lot of unknowns about this event, I do know certain drivers will likely do well here based on their dirt racing history. Fox Sports’ Bob Pockrass shared several thoughts of what you might want to know about this weekend, including how the cars will race, what the tires are like and what happens if it rains. Stewart-Haas Racing on Twitter also posted a graphic of what changes were made to the cars, which you can see below.

Before I move on to this week’s picks, I want to share the results from Atlanta Motor Speedway.

My first mistake was choosing Kevin Harvick or Brad Keselowski over Larson. While Harvick made a good recovery from an early flat that put him a lap behind, Keselowski wasn’t so lucky. He encountered damage that drastically affected the car’s handling, dropping all the way back to 28th place.

Yes, I know Larson is dropping to the rear, which could affect his fantasy score, but he’s one of the best (if not the best) dirt racers in America. It’s no wonder why DraftKings put his salary so high, as he’s won several events in sprint cars and other dirt vehicles. Larson also had the quickest 10-lap average in the first session, though the team had to change engines later on.

Yung Money is sure to make you cash this week, like he has already for many DraftKings users this year. Last week, he notched 160.1 fantasy points at Atlanta after leading a monstrous 269 laps. Larson’s already won one race so far this season, at Las Vegas Motor Speedway, earning 98.4 DraftKings points in the process. He’s the obvious favorite and likely will be highly-owned in both tournaments and cash games, but don’t worry too much about that. Look for him to be up front by the end of the evening and living up to his hefty salary on the roster.

Bell is here for much of the same reasons as Larson, as he also has a knack for dirt racing. He dominated Eldora in 2015, leading 106 laps en route to the victory. Additionally, Bell won the Chili Bowl Nationals from 2017-2019 and has won many other dirt events in sprint cars and late models.

The No. 20 Joe Gibbs Racing wheelman already has a win this season, capturing the checkered flag at the Daytona International Speedway road course last month. Bell also has two other top 10s at Las Vegas and Phoenix Raceway, scoring over 34 fantasy points in each event.

Though he didn’t have a good average lap speed in final Bristol practice, Bell did post the second best single lap time in the first session. His experience on this track type should propel him to the front by race’s end.

Bowman also had a dirt racing background before a wreck made him rethink his racing career. He displayed his skill in Bristol practice, posting the second and fifth-fastest 10-lap averages in the first and second sessions, respectively. The changing track conditions might affect his speed over the long run, but if there’s a late caution (which I wouldn’t doubt for this course), he might be a contender for the victory.

The No. 48 Chevrolet driver has three top 10s so far and has scored over 38 DraftKings points in four of  six events. Last week, Bowman came home a quiet third after starting 14th, notching 14 fastest laps as well. He might be low-owned on DraftKings this week, depending on where he qualifies, and could be a sneaky play for your lineup.

Newman also has a good depth of experience on the dirt, posting midget and United States Auto Club (USAC) wins. However, much of it came over 20 years ago, though he has raced in other dirt events since then. Newman ran third in the inaugural Eldora Truck event, showcasing that experience can translate into NASCAR. He also posted the 11th-fastest 10-lap average in final Bristol practice Friday.

So far this season, the No. 6 Roush Fenway Racing driver has one top 10 (a seventh at Homestead-Miami Speedway) and four top-20 finishes. Last week, he scored 45.5 DraftKings points after ending 13th at Atlanta — a really good score for his salary. This week, that salary is even lower even though early indications are he’ll be good on the dirt.

Newman’s experience should really come into play on Sunday and would be a good addition to your roster. Don’t lose out.

DiBenedetto never raced at Eldora in the Truck Series, but he did grow up racing karts on dirt tracks in California. He also has had some good results on the paved oval at Bristol, nearly winning the fall 2019 playoff race before ultimately coming in second.

The No. 21 Wood Brothers Racing pilot had the 11th best 10-lap average in first practice and the 13th fastest single-lap time in the final Bristol session. It shows that he adapted well to the new track and he could score a lot of DraftKings points, especially depending on where he starts the race.

At the end of the day, Matty D’s only $6,700 and doesn’t need a whole lot to meet his fantasy value. Look for him to continue his recent 30-plus fantasy points run on Sunday.

No dirt experience? No problem! At least, it appeared that way for Alfredo in practice. He had the 16th-fastest 10-lap average of both Bristol sessions on Friday, which isn’t bad at all for a guy who hasn’t raced on dirt in NASCAR.

Although the rookie hasn’t found the same type of speed Front Row Motorsports teammate Michael McDowell has this year, the Bristol dirt track could be a place where he can right the ship and earn his first top 20 of the season. Alfredo’s been able to gain a few positions in four of the first six events, earning 20 or more fantasy points on DraftKings as a result. That’s fairly good for a driver priced this low. Due to his inexpensive salary, you can stack two or three top-tier drivers in your lineup with Alfredo on the bottom end.

Just be sure to pay attention to where he qualifies on Saturday. Starting too high will limit position differential points and his impact in getting your roster over the finish line.