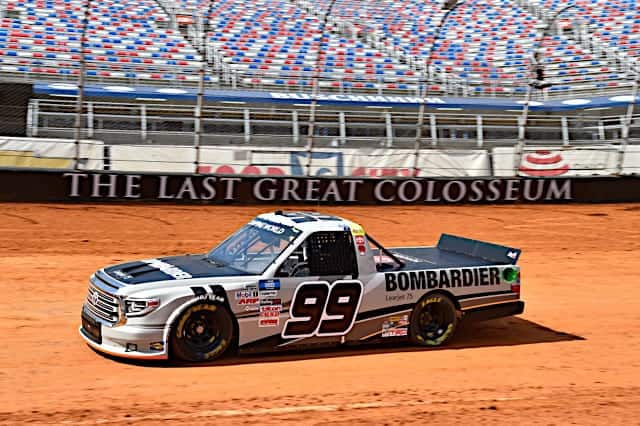 The NASCAR Camping World Truck Series had two practice sessions at the Bristol Motor Speedway dirt track on Friday (March 26). These were the first practice sessions for the Truck Series since its season-opening race weekend at Daytona International Speedway. Raphael Lessard and Ben Rhodes paced the two sessions, respectively.

Lessard wheeled his way atop the leaderboard with a speed of 92.860 mph.

Driving the No. 04 Roper Racing Ford, Chase Briscoe was fourth on the charts.

Rhodes, a two-time winner this season, completed 39 laps en route to topping the leaderboard this session.

Friesen and Matt Crafton rounded out the top five, respectively.

There were a few spins in this session, but JR Heffner suffered the most damage when he destroyed his No. 3 Jordan Anderson Racing Chevrolet. The team will likely have to go to a backup vehicle.

A tough break for that No. 3 machine. @jrheffnerracing suffers heavy damage during final practice. pic.twitter.com/UG8WPgqJmY

The Truck Series will return to the track tomorrow for its heat races and race tomorrow. The first heat race is scheduled to begin at 4:30 p.m. ET and the Pinty’s Truck Race on Dirt will take place at 8 p.m. ET. FOX Sports 1 will broadcast all those events.