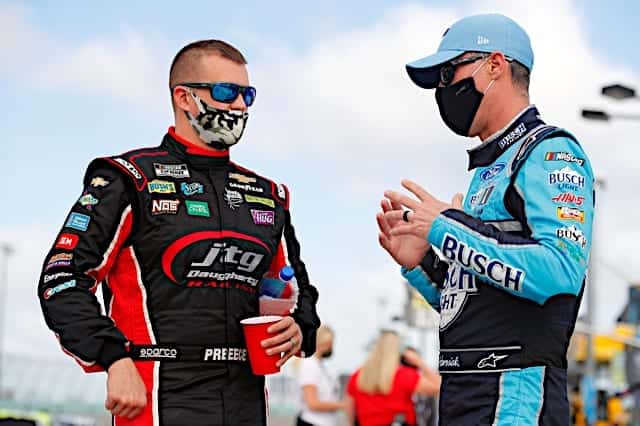 Kevin Harvick is the latest upper-series driver to throw his name into the ring at the Bristol Motor Speedway dirt track in the NASCAR Camping World Truck Series.

Harvick will drive the No. 17 for David Gilliland Racing at Bristol, KHI Management announced March 10.

Additionally, Harvick has been announced for three Xfinity Series races in 2021 for Stewart-Haas Racing, all at road courses: Circuit of the Americas, Road America and the Indianapolis Motor Speedway road course.

The number for Harvick in those races has not been announced. SHR fields the No. 98 full time in the series for Riley Herbst.

Ryan Preece was also announced for races in the DGR No. 17, driving at Nashville Superspeedway and Pocono Raceway.

Both Harvick and Preece race full time in the Cup Series. Through four races, Harvick has two top fives and three top 10s, while Preece has two top 10s.

The Nashville event will mark Preece’s Truck debut, while Harvick returns to the Truck Series for the first time since 2015.

Alongside Harvick, Chase Briscoe has also announced he’s running the Bristol Truck race on dirt, running the No. 04 for Roper Racing Team.