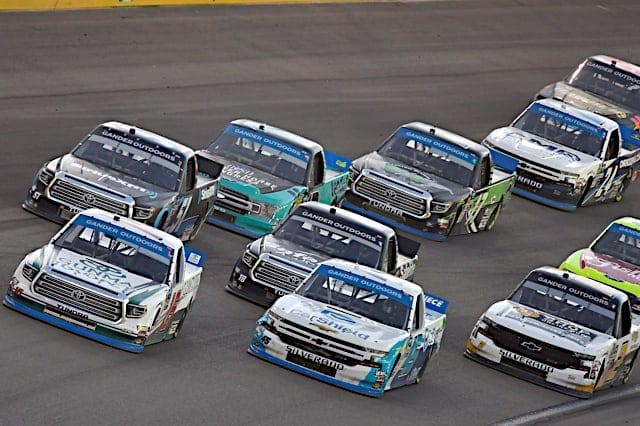 Forty drivers are entered for the NASCAR Camping World Truck Series race at Las Vegas Motor Speedway. Pending any more entries, all drivers will make the Bucked Up 200.

The all-time winningest driver in Truck Series history Kyle Busch will make his first of five scheduled starts in his No. 51 Toyota. Busch has won three Truck Series races at Las Vegas.

After announcing he would only run part-time this season for ThorSport Racing, Grant Enfinger will drive the No. 9 CR7 Motorsports Chevrolet, normally driven by Codie Rohrbaugh. Christian Eckes will make his second straight start in the No. 98 ThorSport Racing Toyota.

Enfinger will be sponsored by Camping World. The company’s CEO, Marcus Lemonis posted a picture of Enfinger’s truck on Twitter and Enfinger expressed his gratitude.

Thanks @marcuslemonis @CampingWorld for making things happen! Thanks to Codie and all of the Rohrbaugh family for letting me hop in the truck @LVMotorSpeedway Also big thanks to @ThorSportRacing Duke/Rhonda for letting me have some fun this weekend. I’ll be in the 98 for Atlanta https://t.co/6STCQu7GUd

Kris Wright returns to pilot the No. 02 Young’s Motorsports Chevrolet after Kaz Grala drove it to an eighth-place finish at the Daytona International Speedway road course.

Team owner David Gilliland will make his second start this season driving the No. 17 Ford.

Jordan Anderson returns to drive his No. 3 Chevrolet after he finished second in the season opener at Daytona International Speedway.

As previously announced, Conor Daly will drive the No. 44 Niece Motorsports Chevrolet.

The Bucked Up 200 will take place on Friday, March 5 at 9 p.m. ET with TV coverage provided by FOX Sports 1.