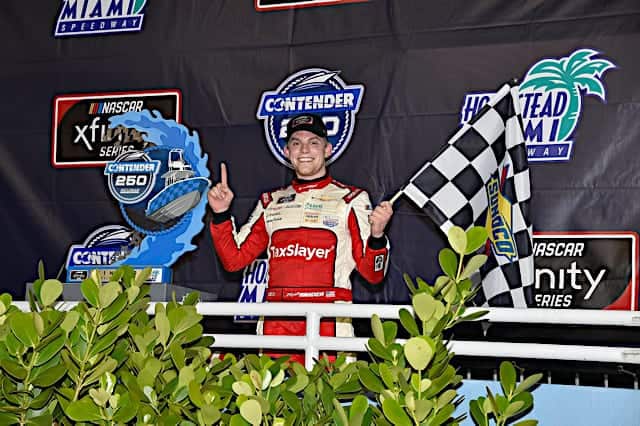 ONE: It Gets Late Early Out Here

The great Hall of Fame Yankee catcher and 13-time World Series Champion Yogi Berra once quipped “it gets late early out here,” and it’s a Yogi-ism (as his many impromptu lines were known) that fits well with the current playoff picture. It would be fair to say there is little we all agree on as NASCAR fans, but I think the vast majority would be on board in saying this was not the start of the Cup season we expected and certainly not the three drivers we expected to grace victory lane.

Yes, most prognosticators would have had Christopher Bell and William Byron being on the right side of the cutoff line, come playoff time, but a significantly smaller amount could say that about Michael McDowell, despite his superspeedway prowess. We now have a four-race stretch prior to the Easter break that will then be quite instructive as to the overall playoff picture.

It’s not beyond the realms of possibility we get a late caution and an unexpected winner at Las Vegas Motor Speedway, Phoenix Raceway or Atlanta Motor Speedway, and I’ve not even said anything about the whole Bristol dirt race thing. We could easily head into Easter with five winners we wouldn’t have expected by the first off weekend.

Side note: I’ve not looked forward more to a regular season race than the Bristol dirt race (outside the Daytona 500) in quite some time — I can’t wait. In the FOX booth, Clint Bowyer has been an extremely welcome addition, and as I said in my season opening column, maybe, just maybe his second career in NASCAR will end up better than his first. Yes, there’s a long way to go, but he’s off to a good start, and the Days of Thunder rental car scene remake just about stole the show. Larry Mac’s Any Given Sunday speech wasn’t bad either. So all told, it’s been a good start to 2021. Let’s hope this continues in Las Vegas this Sunday afternoon.

Back in November 2016, I interviewed Myatt Snider a few days after he had competed in his first ever Camping World Truck Series race. Driving the No. 22 Toyota Tundra for AM Racing, Snider finished a creditable 17th, picking up his final position on the last lap of the race. But his day was not without some misadventure with the rookie spinning on the very first corner of his very first lap.

“It’s just amazing to finally be in this position,” said an elated Snider of his victory. Continuing a theme of first-time winners, following McDowell and Bell in the Cup Series, there’s no question Snider’s win came in part due to Noah Gragson’s shocking misfortune. But this is why we run these races all the way to the checkered flag.

“Just a shout-out to all these RCR guys, Taxslayer, all these people that supported me over the years,” Snider said. “It’s been a rough journey, but we’re here with a win, and I can’t complain.”

I’m doubling down on what I said about Snider for the first time over half a decade ago: He will be one to watch this year.

We’re starting to get into the meat and potatoes of the 2021 NASCAR Cup Series season now, and there’s a good stretch of four upcoming Cup races before we pause for Easter. We begin with a pair of playoff tracks: Las Vegas Motor Speedway and Phoenix Raceway, before the first of two visits to the fast and abrasive high banks of Atlanta Motor Speedway. While the championship deciding race at Phoenix is still a very long way off, it’s a chance to see where teams stack up in the early going with their short track programs.

As Chase Elliott showed last season, the Martinsville-Phoenix combo is a powerful title-winning punch. Joey Logano made use of exactly the same in his 2018 title winning season. And then there’s the Bristol dirt race; hallelujah for the Bristol dirt race. Bristol will be one of just eight tracks with practice and qualification in 2021. The Cup teams will run a pair of 50-minute Friday practice sessions before four 15-lap heat races on Saturday will determine the starting lineup. I am genuinely fascinated by how this weekend show plays out.

With the stock car component of the racing calendar firmly underway, we’ll see some action on the open wheel side next week, more specifically Formula One testing. Five years ago, teams had three separate test sessions stretching over 12 days. Now, it’s one short, sharp three-day burst to iron out the off-season kinks at Bahrain International Circuit.

The track will also host the 2021 F1 season opener, the first of a record 23 races — two more than the previous highest total of 21 (2016, 2018, 2019). The question is the same as always: Does anyone have anything for the dominant Mercedes team? Can Red Bull engineer a car that Max Verstappen can compete in every race? Could a revived Sergio Perez be a factor in his new Red Bull ride? Or, is it just a question of when Lewis Hamilton has statistically more points than Valtteri Bottas can acquire in whatever is left on the schedule and a record-breaking eighth title? Worth noting, too, the return of the great two-time champion Fernando Alonso after a two-year absence. A veteran of some 312 F1 races, Alonso rejoins Renault, the team for which he won his back-to-back titles (2005-2006). As always, Alonso will be more than worth watching.

And finally this week, a quick word about the 2010 Daytona 500 champion Jamie McMurray. Prior to the race on Sunday, McMurray sat 22nd in the standings with the 30 points he accrued in this year’s Great American Race. And there were some big names beneath him with a pair of races to their credit. Thankfully nearly all of those drivers eclipsed the Jamie Mac line at Homestead-Miami Raceway with one notable exception, Matt DiBenedetto. Now I don’t write this to make fun — I’m Team MattyD all day long. It seems just about right in this crazy world of ours to get all super dramatic about his perilous position, but given the winners already in 2021, perhaps more so. Here’s hoping DiBenedetto has a great run this weekend in Las Vegas, kickstarting a solid run of form.