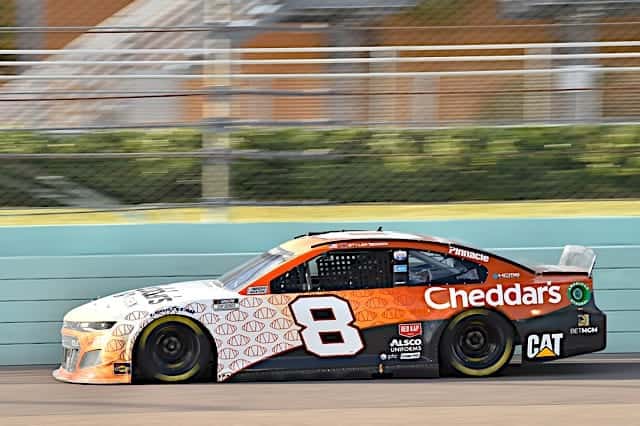 After the first two races of this NASCAR Cup Series season resulted in two first-time winners, Tyler Reddick emerged as a favorite to make it three straight.

Reddick, after all, has won twice at Homestead-Miami Speedway in his NASCAR Xfinity Series career en route to back-to-back championships. He also had a fourth-place finish in his first Cup Series race there. Yet when the checkered flag flew to end Sunday’s (Feb. 28) Dixie Vodka 400, Reddick ended up second, tying his career-best result.

Reddick wheeled his No. 8 Richard Childress Racing Chevrolet through the field and passed Kyle Larson for second on the last lap before finishing 2.7-seconds behind race winner William Byron.

“It was a good night considering how the first two weekends went,” Reddick told Fox post-race. “Once I saw how really fast we were in clean air at the end there, I saw how fast we were catching everybody. Beyond frustrating, just two or three different decisions on a restart would’ve put me miles ahead and I would’ve been within reach. Second’s great but I saw how much faster I was than those guys there at the end. Naturally, it’s frustrating.”

A 35th starting position did Reddick no favors. Furthermore, early on in the race, he battled an ill-handling No. 8 Chevrolet.

“I don’t know why we were off at the beginning of the day,” Reddick told media members in a post-race Zoom call. “Last year in the summer we took off really well in the daytime so I thought, ‘We’re going to be better in the day and everyone will catch up at night.’ It was the opposite. When you see how much faster you are than the guys in front of you and you’re running out of time, it gets frustrating. … We had a really bad start to the year. Second’s great but we’re still way back in the mix of it.”

Reddick is 23rd in points after he finished 27th and 38th (crash) in the first two races of the season.

He failed to score stage points in either of the two first stages. He gained 10 positions during the first stage to place 25th at lap 80. When the second stage ended 80 laps later, Reddick was 18th.

Give us 5 more laps?

“I didn’t have a good last restart,” Reddick said. “We struggled to get our Chevy going. I had a poor restart and it was a difference, unfortunately. Lost too many spots and it takes time to get back around those cars. They’re good drivers, they know what they’re doing and that’s the difference. All there is to it. We needed to be better at the start and we just didn’t.”

Reddick also competed in the Xfinity Series race at Homestead the previous day. He crossed the finish line in second, but his No. 23 Our Motorsports Chevy failed post-race inspection, relegating him to last place.

“It was very odd,” Reddick said comparing his double-duty performance. “The Xfinity car and Cup car couldn’t be any more different. It was pretty wild. I fought the same thing in the Xfinity car at the beginning of the race into the night. That helped me explain to the team and believe that as it transitioned into night, we were going to get better. That helped us get through. We weren’t being conservative, we just fought through it ’til there at the end.”

Despite earning his fourth career Cup Series top-five finish, Reddick doesn’t believe the finish will garner him momentum for the next race this season.

“Atlanta [Motor Speedway] and maybe you’ll see at Kansas [Speedway], Darlington [Raceway] is another one where you search around to find grip,” Reddick said. “Those tracks you will [have momentum]. The repaves like [Las] Vegas [Motor Speedway] you’ll see a difference cause you don’t move around as much with the tire fall off.”

Still, Reddick and his team found something to build upon, at least serving as a confidence-booster in his second full-time Cup Series season.

“The story of my rookie season and our team last year was start off really good, just midway through the race it blows up in our face and we don’t get a good finish out of it. Today was the opposite, which was nice,” Reddick remarked. “It’s something we figured out all week on how to have nights like this. How can we continue to stay hungry and keep fighting? We definitely tried to work on our car all night. We also went for track position on those pit stops. Those helped us.”

Although the momentum and strong performance won’t necessarily translate to the next race, Reddick knows the formula necessary to breakthrough for his first Cup Series win.

“You have to win these races by being consistent, the right calls on pit road, and as a driver, stay up front and maintain your track position,” Reddick said. “You don’t have the options like at Homestead at most places we go.”

Next up on the Cup Series schedule is a trip to Las Vegas Motor Speedway. Reddick has won there in both the Xfinity and NASCAR Camping World Truck series. He only has one top-20 finish in his two Cup Series starts at the 1.5-mile track.