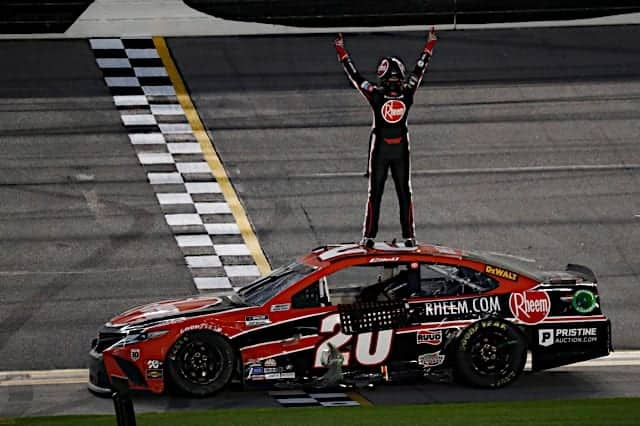 Here’s an interesting tidbit: For the first time since 1950, the first two races of the Cup Series schedule have been won by first-time visitors to victory lane. It’s almost happened a couple times before. In 2001, Michael Waltrip picked up his first win at Daytona International Speedway, but Rockingham Speedway winner Steve Park had one trophy on his shelf already. Then there was 1970, when Pete Hamilton won for the first time in the Daytona 500 and James Hylton earned his maiden win the following week. However, the 500 wasn’t the first race in 1970 but rather the fourth. Now let’s dig into a few more numbers from yet another race weekend in Daytona.

Leavine Family Racing dabbled in the Cup Series for a solid 10 years before folding at the conclusion of last year having never won. Worth noting is the fact that after the results of the first two races this year, four of the team’s former drivers have won a race elsewhere. Michael McDowell and Christopher Bell both drive for the most recent occupant of the shop that once housed Alan Kulwicki’s self-owned team. Regan Smith and Kasey Kahne are the other one-time Leavine wheelmen who have reached the pinnacle for a different organization.

Ty Gibbs is just 18 years old. He has never started a Camping World Truck Series race. He has only started a single Xfinity Series event and he finished (checks notes) … first! Much like his grandfather, team owner Joe Gibbs, the younger Gibbs is a winner. He only has a handful of starts in the ARCA Menards Series, K&N Pro Series, and now Xfinity, yet he has won in them all. Continuing with a solid development plan, Gibbs could be scary good in a few years.

The record of consecutive victories on road courses at the Cup level was set by Jeff Gordon back in the late 90s. Chase Elliott, who dominated on Sunday, had collected four in a row coming into the race, but a late race spin relegated him to 21st at the end. While both are significant achievements, each had an advantage that the other did not. Gordon only had two races per year to compile such a run. Elliott had more opportunities to win, as three of his four wins came on oval infield configurations that Gordon never raced on.

However, in the late 90s, many drivers had little road racing experience and loathed the visits to Sonoma Raceway and Watkins Glen International. The number of likely winners could be counted on one hand in that era, and Gordon took full advantage. Interesting fact that the driver who ended both streaks was a first time Cup winner.

This average finish after two races belongs to Ryan Preece. The JTG Daugherty Racing driver had two top-10 finishes all season in 2020, but has already matched that number this year. While superspeedway racing and road courses do level out the playing field a bit, it’s a remarkable jump out of the gate and a possible relief for a guy who might be on a bit of a hot seat.

Even though drivers all seem to want a hot hand going into the fall, a quick start seems to be just as important when chasing the title. In the 17 years of a playoff championship format, the eventual champion has won at least one of the first 10 races in all but two of those years. Excluding Kyle Busch in 2015, that is. Since he didn’t participate in any of the first 10 races, obviously it would have been impossible for him to win any of them.

The only driver who has a playoff title without a win in the initial 10 races that year is Tony Stewart, who did so in both 2005 and 2011. This was less of an exception for Stewart himself, who always seemed to start slow. For the duration of his entire career, Smoke only claimed one checkered flag during the months of February and March combined. While it may have worked out for him, it would be unwise for any current championship hopefuls to hit the snooze button this year.