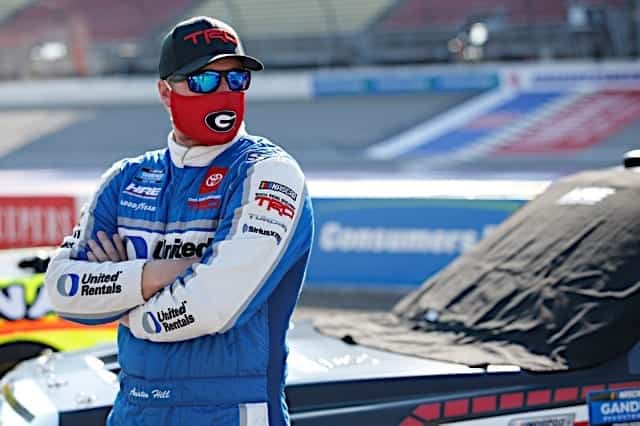 Austin Hill is returning to the NASCAR Gander RV & Outdoors Truck Series in 2021.

The 26-year-old will again wheel his familiar No. 16 Toyota for Hattori Racing Enterprises in 2021, Hill announced Oct. 30. In addition, the Georgia native will also pilot a yet-to-be-numbered HRE entry part-time in the NASCAR Xfinity Series.

“I can’t imagine a better scenario than to be with this team and everybody at HRE,” Hill said. “I keep saying it, but I truly believe this is the best team in the series, and I’m proud to race with this group and can’t wait to continue what we’ve built over the last two seasons. It’s even better to have partners like United Rentals and everyone at Toyota and Toyota Racing Development for supporting our program like they do. We’re glad to have next year laid out, but we have two more races to try and win a championship.”

Currently, Hill is in the thick of a championship battle in the Truck Series playoffs thanks to the two wins and 11 top fives he has collected so far this season. Additionally, Hill has made select starts in the Xfinity Series in a collaboration between HRE and MBM Motorsports.

Hill has scored a total of six career wins in 95 careers NGROTS starts.

“We’re glad to keep the team together next season with Austin and United Rentals,” team owner Shige Hattori said. “He has done a great job with Scott and the entire team the last two years, and hopefully we can close out this season with a championship and start strong at Daytona next year.”

Other primary sponsors will be announced at a later date.