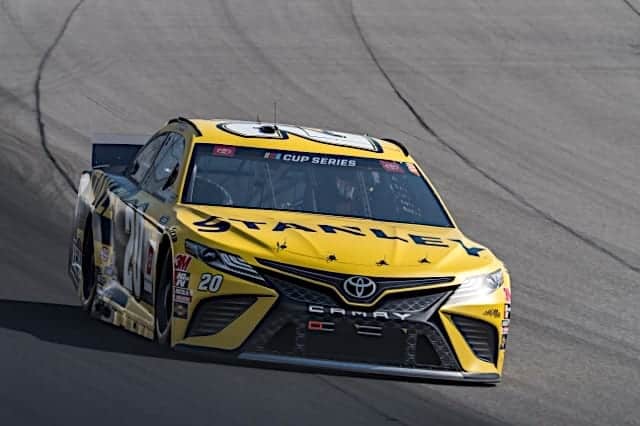 Fort Worth, Texas is home to two massive sporting venues. One is AT&T Stadium, known colloquially as “Jerryworld”, the home of the Dallas Cowboys and one of the most advanced sports facilities in the world. The other is Texas Motor Speedway, a 1.5-mile oval known both for its long distance races and variability as either a NASCAR or IndyCar track. That’s where the AutoTrader EchoPark Automotive 500 will run on Sunday, Oct. 25 with your NASCAR FanDuel roster in tow.

Since inheriting this date on the calendar from Darlington Raceway, Texas has become one big stop on the road to the NASCAR Cup Series championship. Really, the only NASCAR Playoff driver who can take the week off is Joey Logano, thanks to his victory last week at Kansas Speedway. Keep those drivers near the front of your roster selections as a chance to win a series title is their reward for a victory Sunday afternoon.

Also keep in mind this low-horsepower, high-downforce package puts an emphasis on track position. Playoff contenders start up front while all others will fight to pass at a place where Austin Dillon won on old tires earlier this summer. The driver with the smartest crew chief may make money for your roster as you want to focus on people willing to take chances to get out front.

Another part of races at Texas to be aware of? Late-race contact. In the past 15 years of fall races here, there have been a few times where dust-ups left tempers flaring, most memorably when Brad Keselowski and Jeff Gordon got into a huge pit road brawl in 2014. The mess had everybody from crew members from both teams to famed FOX Sports reporter Bob Pockrass swept up in the melee.

Keep those conflicts in mind when sorting out your roster. Some drivers may not wait until Martinsville Speedway next week to enact some revenge.

Here are the rules for the Daily Fantasy NASCAR FanDuel Game.

Also, with only 0.1 points awarded for each lap led by a driver, the need for a dominator is less important when building a winning lineup. The 334-lap race will have a total of 33.4 points up for grabs in this category. Take note when building your roster and focus on mid-pack competitors who can climb up toward the front on race day.

Here are a few drivers to keep an eye on when setting your NASCAR FanDuel roster this Sunday.

The championship favorite, Harvick’s three wins at Texas all have a very simple pattern: he’s won the past three fall races there. Could four times be the charm again this weekend?

While that streak marks the only wins in Harvick’s career at Texas, he’s had incredible consistency in the Lone Star State ever since joining Stewart-Haas Racing. In the first half of Harvick’s championship season in 2014, he struggled with engine/equipment issues and the spring Texas race was no exception. There, Harvick blew an engine and finished 42nd. Since that race, however, Harvick has been 12-for-12 in top-10 finishes and earned seven podiums at this racetrack.

That track record is hard to bet against. It’s near impossible to not pick Harvick here, in spite of his steep price and being on pole to begin the race. The cost in position differential points is worth it with the amount of laps he might lead Sunday afternoon.

Jones may not be an attractive pick, considering his lame duck status at Joe Gibbs Racing and being fourth on the totem pole when it comes to the priorities of this team. There are some huge positives to Jones after looking into his record at this track, however. Outside of a 22nd in the spring race in 2017, Jones has never once finished outside of the top 12 at Texas. In fact, he has just two finishes outside of the top 10 in general. That’s good consistency to back up a $10,000+ salary.

Jones probably isn’t going to have a surprise win on Sunday, which is unusual to say for a driver valued this high. But he should be able to get any fantasy team a solid finish and provide a decent position differential bonus with his 17th starting spot.

Texas is basically do-or-die for Bowman when it comes to the Championship 4. Based on his short track history, it’s unlikely that he’s going to be that competitive at Martinsville next weekend. Add in how well Hendrick Motorsport’s mile-and-a-half program is and it’s clear TMS would be the place for a Hail Mary from the No. 88 team.

Bowman only has one top-five finish here, but it was a fairly important one; a fifth in last year’s fall race. Bowman also picked up some stage points in the summer race this season at Texas prior to crashing out late in the event. Don’t sleep on his potential success Sunday.

That average finish is definitely the highest of all active drivers in TMS history. Granted, it’s after just one start… but second is still second.

This Cup rookie’s runner-up finish came in the July race at Texas after both he and teammate Austin Dillon chose track position over four fresh tires. It wound up being a great strategy call that ended in a Richard Childress Racing one-two performance. Now, Reddick is back in Texas, still in contention for 17th in points and has put together a solid freshman year. A decent run could easily be in the cards for him again.

This event is somewhat of a home race for Suarez and the Mexican native has had some strong runs there over the last few years. In 2019, Suarez’s lone season with Stewart-Haas Racing, his best finishes were two third-place results. Both of them came at Texas.

Sure, he’s not going to match those results in a lesser-funded Gaunt Brothers Racing ride. Suarez doesn’t even have a top-10 finish this year. But he should be able to have a solid top-20 performance, which is exactly what a pick in this tier needs to do.

Logano cannot directly help his case for Phoenix this weekend, but he can cause further mischief in the playoffs by winning this race and forcing all seven drivers to be on the bubble at Martinsville next weekend. While I did not pick Logano to be on my team this week, he wouldn’t be an awful selection for any fantasy roster. An average TMS finish of 13.5 is pretty good for a driver who has made 24 starts at any racetrack. Add in a win in 2014 plus a third in the July race and it equals credibility for Logano as a potential winner.