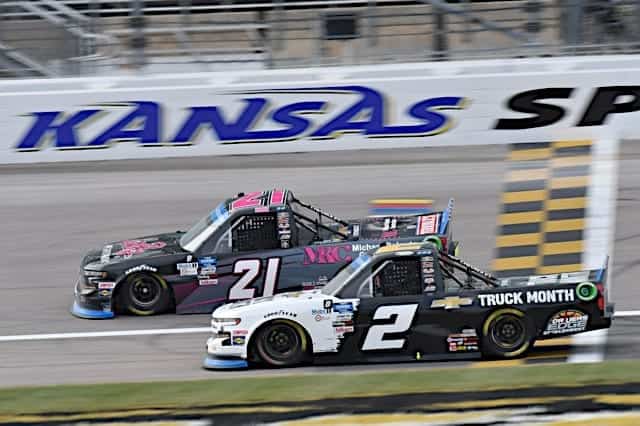 It was a GMS Racing battle late in the Clean Harbors 200 at Kansas Speedway that ultimately left a sour taste in one playoff driver’s mouth.

”I’m really not going to say much about it because I’ll probably just end up getting myself in trouble,” Smith told the FOX broadcast after the race. “That felt like that was ours.”

"Hang on to it buddy!" –@KurtBusch

As Smith watched the replay, he commented that “it just seemed like [Moffitt] darted down. […] I don’t know if you would qualify that as a save but what a big moment from my seat….

”Great race, just, man wish I could’ve locked myself in there [to the Championship 4].”

Smith ended the race with an 11-place result after the overtime finish, and is currently seven points above the cutline. It was a disappointing result for what had been a strong day overall, having led 37 laps.

Moffitt, meanwhile, secured his spot in the championship at Phoenix Raceway. He apologized for the block but also noted “We were racing hard for a championship spot, and that’s what you gotta do.”

Sheldon Creed led much of the first half of the race before an ill-handling truck put him further back in the field. He still went on to finish second, though, and is second in the standings. Austin Hill battled back to a podium result after suffering a tire rub near the end of Stage 2.

Other playoff competitors also had their share of problems, as Ben Rhodes needed a lot of work done on his loose truck. He also went two laps down after his team went to work on his truck while the red flag was out. Rhodes ended up one lap down back in 20th after starting on the front row, and is 33 points below the cutline.

Additionally, Tyler Ankrum had an early exit after getting caught up in an early wreck. His truck caught fire, but he was able to get out alright and was released from the infield care center.

Ankrum told the broadcast, “I know we’re in the hole now with the playoffs, so we’ve probably got to go out and win Texas [Motor Speedway], Martinsville [Speedway] and we’ll try to make the final 4.”

The trucks head to Texas next Sunday, Oct. 25 at 12 p.m. ET. Coverage will be provided by Fox Sports 1 and MRN radio.