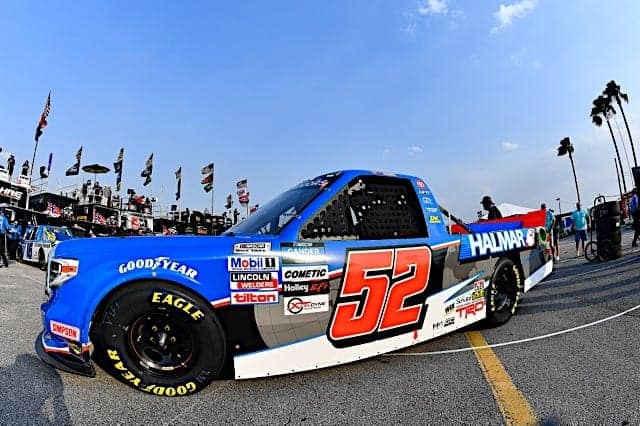 UPDATE: Christopher Bell is not eligible to run the Truck Series race at Kansas Speedway in Stewart Friesen’s place. Further information about who will pilot the No. 52 Toyota in his place will be released at a later date.

“In an earlier press release, we announced that Christopher Bell would be filling in for Stewart Friesen on Oct. 25 in the Clean Harbors 200 at Kansas Speedway,” the updated team release stated. “after this announcement and communication with officials at NASCAR, the parties involved were made aware that according to the NASCAR rule book, Bell would not be eligible to compete in the upcoming NGROTS event at Kansas Speedway without switching series points for the 2020 season.”

Due to a prior commitment, NASCAR Gander RV & Outdoors Truck Series driver Stewart Friesen will not race at Kansas Speedway on Oct. 17, his team announced Sunday (Oct. 4). NASCAR Cup Series rookie Christopher Bell is scheduled to drive the No. 52 Toyota Tundra in his place.

Friesen, who isn’t in the playoffs this season, is set to compete in the Short Track Super Series at Port Royal Speedway that same night.

“The Kansas schedule change just announced by NASCAR moved the truck race to the same date as our previous commitment with the Short Track Super Series for the Speed Showcase 200 at Port Royal Speedway,” Friesen said in a team release.

”Since we are not in the NGROTS playoffs this year we tapped our friend Christopher Bell to drive the truck for us in Kansas. We are excited to see what Christopher can do with the HFR No. 52. With his experience in the Truck Series, Xfinity Series, and Cup Series we know he will be able to deliver valuable feedback to our team as well, which will help our program continue to develop.”

Friesen has three top fives and 10 top 10s so far this year. He will return to race at Texas Motor Speedway on Oct. 25.

Bell has one top five and five top 10s in Cup, earning his best finish of fourth at Pocono Raceway. In trucks, Bell has seven victories and earned two top fives at Kansas.

Though Bell has been tapped as the substitute driver, Section 7.1.e of the NASCAR rule book states, “a driver that has elected to accumulate Points in the NASCAR Cup Series is not eligible to enter the last eight Events of the NASCAR Gander RV & Outdoors Truck Series Race season.”

As of press time, NASCAR has not indicated whether an exception will be made to this rule or if Bell will be switching to Truck points.