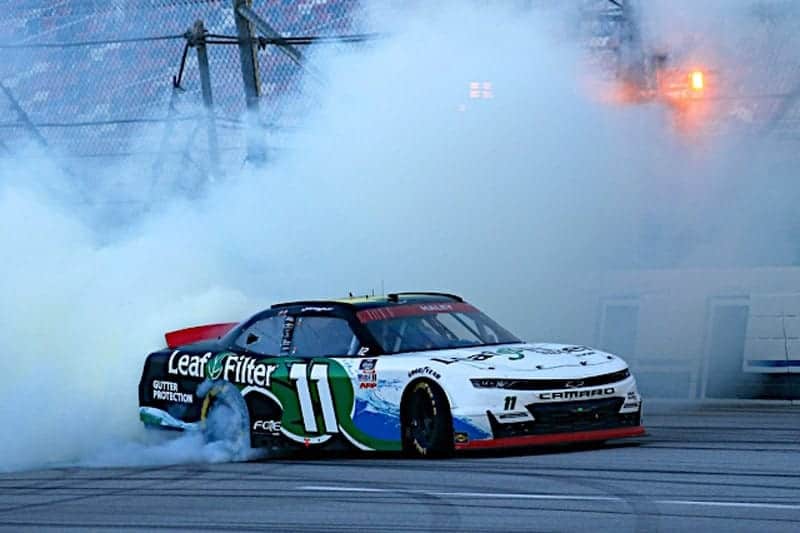 Due to the COVID-19 pandemic, NASCAR realigned the NASCAR Xfinity Series race at Mid-Ohio Sports Car Course to Talladega Superspeedway. The venue change benefitted Justin Haley most as he led the final two laps en route to winning the 2020 Ag-Pro 300 on Saturday (Oct. 3).

It is Haley’s third straight win on a superspeedway as he won the first race at Talladega earlier this year and the Xfinity Series’ most recent race at Daytona International Speedway.

Kaulig Racing has won three of the last four Xfinity Series races on superspeedways. In addition to Haley’s three wins on those race tracks this year, Ross Chastain earned the team its first win at Daytona last year in the Circle K Firecracker 250.

Haley has become an ace at superspeedway racing, proven by winning twice at Talladega and once at Daytona this season. Moreover, his lone NASCAR Cup Series win came in a weather-shortened 2019 Coke Zero Sugar 400 at Daytona. Haley also won at Talladega in the ARCA Menards Series in 2017.

With his victory, Haley advances to the Round of 8. He and Chase Briscoe are the only two drivers who have advanced to the next round. Briscoe guaranteed his berth with his win in the series most previous race at Las Vegas Motor Speedway.

Three different drivers led the final four laps in the second race in the Round of 12 – Briscoe, Noah Gragson, and Haley.

Briscoe won the first two stages and led the most laps (73 of 113), yet was moved from the lead after he attempted to block Gragson in the closing laps. From there, drivers wheeled their cars all over the track on the 2.66-mile superspeedway.

Kaulig Racing fixed his No. 10 Chevrolet, he received the lucky dog at the end of the second stage, and he leaves Talladega above the Round of 12 cut line.

Austin Cindric has won five times this season, so he began the playoffs with 50 playoff points, second-most behind only Briscoe. Cindric also finished second in the first two stages, earning 18 stage points. Those points proved their worth at Talladega, which is tough for anyone, as Cindric’s Ag-Pro 300 ended prematurely on lap 77.

Another playoff driver, Justin Allgaier, saw smoke come out from his No. 7 JR Motorsports Chevrolet after the field refired its engines once the red flag was lifted on lap 49. Allgaier earned seven total stage points, but his race worsened as the laps clicked away. After Allgaier first reported his No. 7 Chevrolet was down a cylinder, the engine ultimately expired on lap 95 and Allgaier finished 30th, not indicative of his performance.

Kody Vanderwal battled ignition issues early in the race, forcing him to bring his No. 52 Chevrolet into the garage for repairs. Jimmy Means Racing repaired the car, and Vanderwal returned to the race more than 10 laps behind, ultimately finishing in 29th place, 13 laps down. It’s his ninth straight race without a lead-lap finish. The rookie Vanderwal only has two lead-lap finishes all season.

Riley Herbst finished the worst of all the playoff drivers with a 35th-place finish. He was the victim of contact with Austin Hill, and Herbst went for a ride as his No. 18 Joe Gibbs Racing Toyota slid into the inside wall.

A heavy hit for @rileyherbst!

The No. 18 goes for a slide after contact with @_AustinHill! pic.twitter.com/wzfr5DGlzE

Herbst was displeased with Hill, who competes full-time in the NASCAR Gander RV & Outdoors Truck Series.

“It sucks when a Truck Series guy comes in here and has fun. If I went into the Truck Series and wrecked his playoff hopes, I think he’d be mad,” Herbst said after being released from the infield care center.

As for Hill, his Saturday didn’t fare much better either. In the Truck Series race earlier that afternoon, he finished 19th due to a DNF. His fate in the Xfinity Series race remained the same, even after the contact with Herbst. He was involved in the lap 77 incident with Cindric, and he left Talladega with two DNFs.

.@_AustinHill is 2-for-2 on being evaluated and released from the care center today.

There's bound to be days like this…let's hit the house ✌

Each driver’s fastest lap counts for 15% into the algorithm to set the starting lineup for races. In the third stage, both Briscoe and Cindric raced on the inside line. Both drivers, who sit 1-2 in wins in the Xfinity Series this year, both thought about the upcoming race, where they both will be favorites.

Some teams are thinking of dropping to the rear to lay down qualifying laps to improve their starting position next week.

While their strategy was legal, it’s possibly an unintended consequence of this format. NASCAR wants its drivers to race their best throughout the whole race. While Briscoe and Cindric raced up front for much of this race, their decision to lay down their fastest laps without simultaneously challenging for the lead seems contradictory.

Daniel Hemric, Josh Williams, Garrett Smithley, and Alex Labbe were the only non-playoff drivers to finish in the top 10. For Smithley, it’s his first top-10 finish since 2018. It’s also the fourth top 10 for SS-Green Light Racing this year, all at Daytona and Talladega.

Chad Finchum earned a career-best finish of 11th-place. He gained 21 positions from his starting spot of 32nd.

“It’s about the fight of this No. 10 team. I was just hoping we could clear that fender. My Chip Ganassi Racing pit crew did an awesome job. They were the unsung heroes today. Our car chief went over and got that fender fixed. It’s toed in, the crush panels were knocked out of it. That was a hard hit! We kept fighting and gave ourselves a shot at the ROVAL.” – Ross Chastain via NBC Sports Network post-race.

“In the end, you’re doing everything you can to protect the runs. He’s trying to make moves. Just a part of racing here. It was exciting, at least on my end! I thought I was wrecked two or three times trying to block. It was weird cause I knew what he was trying to do and I kept trying to protect it. To win two stages, that’s huge going into the next round. Twentieth [place] doesn’t tell the whole picture, but that’s part of racing here. We’ll go to the ROVAL next week and have some fun.” – Chase Briscoe on being moved after attempting to block Gragson in the closing laps.

“A win would’ve been a lot better but we’re still on the positive side. You never know what can happen at the road courses. We’re excited to go to the ROVAL plus 23.” – Ryan Sieg, who finished runner-up.

With their victories in the Round of 12, Briscoe and Haley have clinched their Round of 8 berths.

Six spots remain for the remaining 10 playoff drivers with one race left in the Xfinity Series opening round.

Cindric, Gragson, Brandon Jones, Sieg, and Allgaier all have a double-digit margin over the Round of 12 cut line.

Chastain is seven points to the good as the last driver above that cut line.

Harrison Burton is the first driver below the Round of 12 cut line with a seven-point deficit. Brandon Brown is 19 markers behind Chastain, while Herbst is 36 points behind due to his DNF. After being disqualified from a would-be second-place finish, Michael Annett is the lowest of the playoff drivers, 38 points below the cut line.

The Xfinity Series drivers will make both left and right-hand turns at the Charlotte Motor Speedway ROVAL. The 67-lap race is the final race in the Round of 12. The Drive for the Cure 250 will take place on Saturday, Oct. 10 at 3:30 p.m. ET with TV coverage provided by NBC.