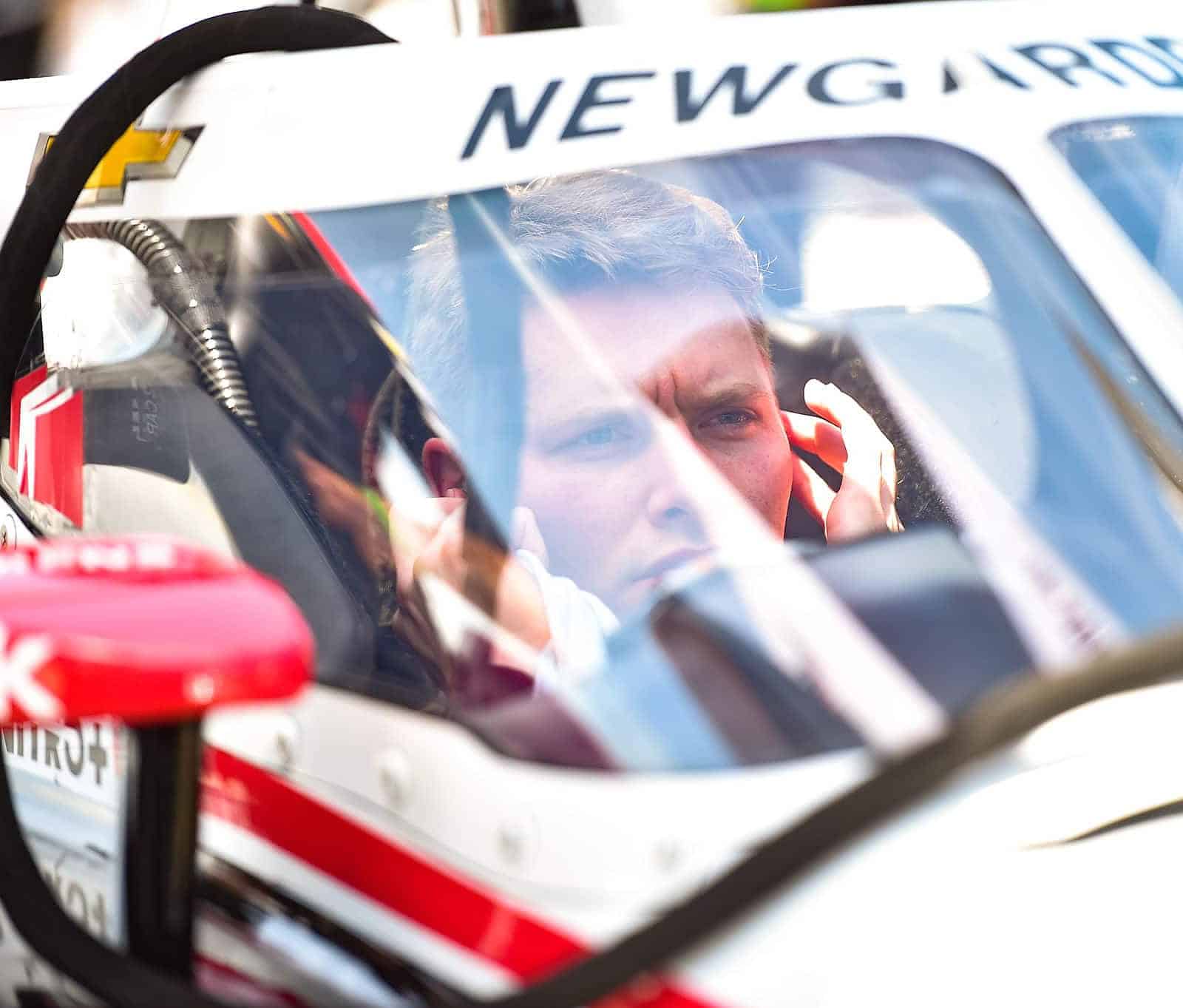 The IndyCar aeroscreen on the car of Josef Newgarden. (Photo Credit: Chris Owens/Courtesy of IndyCar.)

Josef Newgarden, Team Penske’s best hope for the 2020 NTT IndyCar Series championship, took a major step forward Friday (Oct. 2) in the first race of the Harvest Grand Prix doubleheader at Indianapolis Motor Speedway’s road course. While Newgarden didn’t always look dominant, he had a clean, calm race that ultimately led to victory. It’s Newgarden’s first ever win at Indianapolis, shrinking the gap in the Astor Cup between he and point leader Scott Dixon with two races remaining on the year.

“We had a rocket ship,” Newgarden said of his No. 1 car. “I knew we did yesterday in qualifying. I was surprised by how quick it was. Team Penske did a great job.

“I don’t know that I can think about the race. I’m so excited to be up here on this platform. I have to thank The Captain [team and track owner Roger Penske]. He’s done such a good job with his facility. Thank you to everyone who came out.”

The Harvest Grand Prix kicked off with Rinus Veekay on pole and championship contenders Dixon and Newgarden starting from 12th and second, respectively. But it was Colton Herta who provided a strong early challenge. However, Veekay wasn’t going to let him have it: on the second lap, the two drivers had a hard battle for the top spot. Veekay emerged out front, settling into the lead while building up a solid gap on the field.

What a wild start.

Look at this! The rows of four-wide action piling into Turn 1 at @IMS. pic.twitter.com/28V7u6jXgM

Behind the frontrunners, Ryan Hunter-Reay and Santino Ferrucci were racing hard, with Hunter-Reay running his rival wide. Ferrucci had nowhere to go and made contact, causing both to run off track.

The incident ruined the day for both; Ferrucci ran 15th while Hunter-Reay settled for 19th.

Back toward the front, the leaders started the first cycle of stops a little early. Herta and Veekay cycled out close together and on lap 20, Herta began his attempt to pass Veekay, with the two battling hard. Herta pulled out a little wide, then yanked the wheel to pull inside of Veekay and take the spot.

Meanwhile, Newgarden stayed out later than other drivers, putting him in the lead for a bit. Herta got back out front on lap 24, quickly overtaking Newgarden.

The latter half of the race was a steady one. Herta, Newgarden and Veekay remained in the top three spots.

Eventually, Herta’s tires wore out, and Newgarden took the lead, holding it for a race-high 34 of 85 laps on the 14-turn, 2.439-mile road course. He then pulled away while Alexander Rossi made a late charge, clawing his way up to second place despite suffering another penalty at Indianapolis.

“Most of that was because of the officials,” Rossi explained after asking reporters how far he finished behind Newgarden. “I put two wheels over the white line, which was the reference point. Two races at Indy, two weird penalties. I don’t know what to say… We’ve never been good here. it’s been a huge effort for the boys to find the pace here. It’s weird that we keep getting these penalties.”

In the end, no one had anything for Newgarden, who led by 14 seconds at the checkered flag while barely even touching his Push to Pass. Yet another battle commenced between Herta and Veekay for the final podium position, with Veekay holding the advantage at the line.

Felix Rosenqvist rounded out the top-five finishers. Will Power was sixth, followed by Graham Rahal and Jack Harvey. Championship leader Scott Dixon was ninth after a frustrating day in which he ran off course in the final two laps of the race.

Newgarden, defending series champion, ultimately shaved 32 points off Dixon’s championship lead with just two races left in the season. He remains optimistic Dixon can be caught as the gap has shrunk to just 40.

“If you give us a couple races where we hadn’t caught those yellows, we’d be really in this fight,” Newgarden said. “It’s a shame, the deficit we’ve had in points, but this team has been great all year. It’s still a bit of a hill. We made it smaller, but we’ve gotta have three perfect races. We have one down. There’s two to go.”