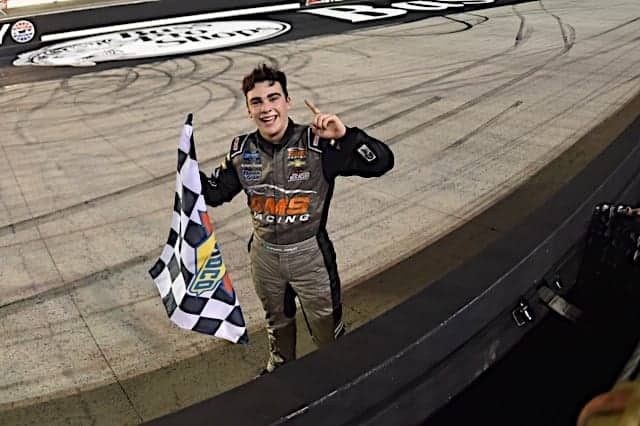 The 17-year-old ran unnoticed most of the night but went to victory lane in his seventh series start, the playoff opener featuring a few incidents involving playoff drivers. Moffitt finished second, and Tanner Gray, Parker Kligerman and Trevor Bayne rounded out the top five, though Bayne’s truck was disqualified for failing post-race inspection.

Austin Hill had the most eventful night of the Truck regulars, suffering damage early when Stewart Friesen hooked the No. 16 and both trucks slid up the banking. Hill got the worst of it, and it wasn’t the last time he caught the wall; later in the race, Austin Wayne Self attempted to clear himself and instead walled Hill. In return, Hill flat-out turned Self’s No. 22 up into the wall in the next turn.

Hill was also black-flagged for having too many crewmen over the wall while his truck was being repaired and ended up finishing five laps down in 26th.

Grant Enfinger finished seventh, but his night wasn’t without issues after mechanical problems early on. Enfinger reported that the engine was intermittently shutting off and came down pit road to fix it. The car chief for the No. 98 ended up jumping in the truck to make the adjustments, and Enfinger managed a top 10 despite the problems.

Moffitt won the opening stage, his truck looking a bit different without a primary sponsor. The blank white truck was out front most of the night but couldn’t hold off stablemate Mayer and had to settle for second.

Just three playoff drivers finished in the top 10, and Johnny Sauter made up for a dismal week at Richmond by finishing 10th. That effort didn’t come without some rather interesting radio chatter, though.

"If you need a caution, get one" @Spotter_Tab tells @JohnnySauter after his speeding penalty. #NASCAR

Tyler Ankrum led every lap of the second stage, but Moffitt took the top spot before Mayer got by with less than 40 laps remaining.

The Gander Trucks newcomer passes @Brett_Moffitt for the top spot with less than 35 to go!

Not the view I want, but they’re about ready to take the green here @BMSupdates! Here to learn as much as I can ?? pic.twitter.com/W22j8qDr71

Number of Rookies in Race: 6

Number of Rookies finishing in the top 10: 1

No drivers clinched spots in the next round with a win, but Moffitt leads teammate Creed by nine points at the top of the standings. Christian Eckes and Todd Gilliland currently sit in the two elimination spots, with Ben Rhodes and Austin Hill also riding the cutline.

Las Vegas Motor Speedway follows Bristol, and the eternal wildcard event at Talladega Superspeedway marks the end of the first round.

4th place for the BEAN MACHINE!

Thanks to #lucksbeans & @HendersonRace for the awesome truck. Catch my whole race break down ? pic.twitter.com/oUOSY5uScq

Man another tough ending. I can give everyone a answer now though, i got told my LF tire was gone. I’ll have a pic shorty for everyone. Thank god for stage points they are saving me lately scored some good ones tonight, another good truck thank you @GMSRacingLLC @TeamChevy. https://t.co/lK8K6gx03H

The Truck Series heads more than 2,000 miles west to Las Vegas Motor Speedway for the middle race of the playoffs’ opening round. Niece Motorsports will field Travis Pastrana and IndyCar driver Conor Daly in a pair of trucks. The World of Westgate 200 is set to get underway at 9 p.m. ET on Friday, Sept. 25. Coverage will air on Fox Sports 1.