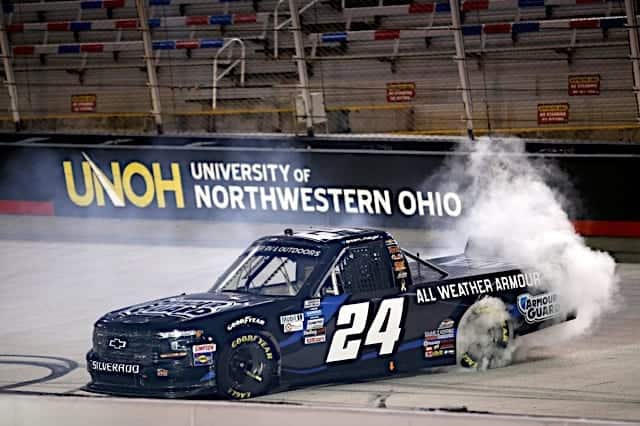 Mayer grabbed the lead on lap 171 en route to winning the UNOH 200 at Bristol Motor Speedway for his first career Truck victory.

He became the second-youngest winner in Truck history in only his seventh career win, behind Cole Custer.

“What? Oh my gosh, Bristol, dude!” Mayer told Fox Sports 1 as he emerged victorious from his No. 24 GMS Racing Chevrolet. “I love this place; this is win No. 3 for me. Man, I don’t know what to say. We fired off good. We only made one adjustment, and that feels so good.

“I knew the team was, this No. 24 team was – I knew they could do it. I just had to come here and perform. That last pit stop put us in a perfect place and we were able to drive by all of them. Man, that’s such a good feeling. We have two more Truck races this year and the momentum is awesome.”

The UNOH 200 was dominated by GMS Racing. Brett Moffitt won the first stage, and Tyler Ankrum, who did not pit at the end of the first stage, took advantage of that track position to win the second stage, scoring 10 valuable stage points.

"Tires got us at the end for sure." @Brett_Moffitt led a career-high 117 laps Thursday night, but he ultimately settled for second. #NASCARPlayoffs pic.twitter.com/jCtv6kAMMm

A number of those playoff drivers battled issues during the UNOH 200. Grant Enfinger fought engine issues for part of the race. Zane Smith felt an issue akin to a tire issue late in the race after leading 30 laps.

.@zanesmith77 was riding safely in the top five, but a late problem dropped him to P17 at the finish. #NASCARPlayoffs pic.twitter.com/sPOwYkaxJ7

After the first race of the Round of 10, Christian Eckes and Todd Gilliland left the 0.533-mile below the cut line.