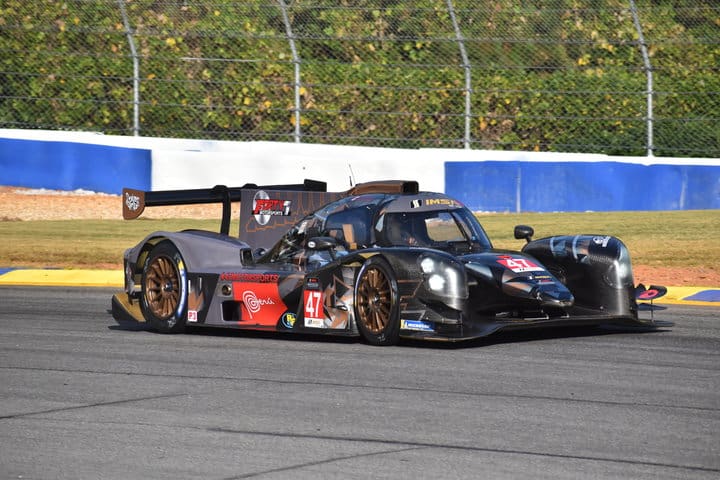 IMSA held their annual State of the Series presentation remotely Wednesday (Sept. 9).  In it, a number of announcements were made pertaining to IMSA’s immediate future.

The point structure is getting an overhaul for all three of IMSA’s primary series.  Points in the races will be decatupled for 2021.  A race win, currently worth 35 points, will be worth 350.  Second will be worth 320, third is 300, fourth 280 and fifth 260.  Positions further back than fifth would decrease by 10.

In addition, drivers will now be able to earn points for qualifying.  The qualifying points system will be identical to the current points system for races.  The pole winner in each class will earn 35 points.  Also, all drivers in each car will earn the same points.  For example, if Jordan Taylor wins the GT Le Mans class pole at Mid-Ohio, he would earn 35 points for the pole.  His teammate Antonio Garcia would also earn the 35 points.  This would prevent a scenario that would allow individual drivers to beat their own teammates for championships just because they qualified the car more often.

IMSA announced that the LMP3 class will be added to the IMSA WeatherTech SportsCar Championship starting with the 2021 season.  Teams with now-current LMP3 equipment that debuted this year in the European Le Mans Series and Michelin Le Mans Cup, or older equipment that has been upgraded to 2020-spec will be eligible to compete in the series.  The new cars are the Ligier JS P320, the Duqueine M30 – D08, the Ginetta G61-LT-P3 and the ADESS 03-EVO LMP3.  They are powered by Nissan V8 engines that will produce approximately 450-460 horsepower, an increase of roughly 30-40 horsepower on the current LMP3 cars.

The LMP3 class will be set up similarly to the current LMP2 class.  There will be a six-race regular championship (for races that they will compete in, see the schedule table below), but the class will also participate in the Michelin Endurance Cup.  The Rolex 24 at Daytona in January will not count for regular championship points, but it will count for the Michelin Endurance Cup.

Driver eligibility for the LMP3 class is not locked down as of yet.  IMSA has already stated that Platinum-rated drivers will be ineligible to compete in the class.  In their press release, IMSA indicates two possible driver ranking regulations that are under consideration.  The easier to understand of the two would have a Bronze-rated amateur paired with either a Silver or Gold-rated driver.  The other possibility involves a Bronze-rated amateur or a Silver-rated driver under age 25 at the start of the 2021 season, paired with either a Gold-rated driver or a Silver-rated driver 25 or older at the start of the season.

With Wednesday’s announcement, there are already takers for next season.  SportsCar365.com is reporting that Riley Motorsports will move their Michelin Pilot Challenge team that runs the No. 35 Mercedes-AMG GT4 full-time for James Cox and Dylan Murry to the WeatherTech Championship’s new LMP3 class next year.  They’ve already chosen the Ligier for their effort.  They won’t be completely out of Michelin Pilot Challenge, either.  Last weekend, it was announced that they’ll be fielding Toyota GAZOO Racing-Latin America’s new Toyota GR Supra GT4 in the series next year.

In addition, Muehlner Motorsports America has already announced their intentions to compete in the Rolex 24 at Daytona at minimum.  They’re not taking it lightly, either

The 2021 schedule is out.  There are 10 races on it, plus the ROAR Before the 24 test in Daytona.  The ROAR has been moved back so that it is now the week before the race.  IMSA hopes to have a heavily fan-centric atmosphere in Daytona Beach ahead of the Rolex 24 at Daytona, much like what normally happens at the 24 Hours of Le Mans in France.

Likely the biggest change on the schedule is the creation of a mini-West Coast swing.  The race weekend at WeatherTech Raceway Laguna Seca has been moved up from the original September date to April.  It will now be the weekend after Long Beach.  Mid-Ohio has been pushed back by two weeks from their original date to the weekend of May 14-16.  Watkins Glen International, Canadian Tire Motorsport Park and Lime Rock are all due to return to the schedule next year after being cancelled due to the COVID-19 pandemic.

None of the substitute events (WeatherTech 240 at Daytona, Cadillac Grand Prix of Sebring, TireRack.com Grand Prix and Charlotte) are scheduled to return in 2021.  However, that could change if the COVID-19 pandemic renders it impossible to stick to the announced schedule.

There is an added wrinkle for qualifying in the LMP2, LMP3 and GT Daytona classes.  There, qualifying will be split into two segments.  The first segment will be with Amateur drivers and will determine actual race starting position like the other classes above.  Following a change of tires, the Pro drivers will then go out and set times as well.  Those times will determine the qualifying points for those classes.

For Michelin Pilot Challenge, the schedule changes more or less match what will happen for the IMSA WeatherTech SportsCar Championship.  They will have 10 races once again with no doubleheaders on the schedule.  The make-up races at Sebring, Michelin Raceway Road Atlanta and Mid-Ohio will not be on the schedule.

Once again, there will be eight two-hour events and two four-hour endurance events.  Those events will be the season opener at Daytona in January and at Watkins Glen in June.

Prototype Challenge will undergo some changes in 2021.  The series will expand to two classes.  One will be for the new 2020-spec LMP3 equipment.  These will be the same cars that will be eligible to compete in the IMSA WeatherTech SportsCar Championship.  The current first-generation LMP3 cars (a Norma M30 from Road Atlanta last year is pictured above) will be grandfathered in for the 2021 season.  They will be in a separate class from the newer, faster equipment.

The current setup with two three-hour races on the schedule in addition to four 105-minute races has been dropped for 2021.  All six events will be 105 minutes in length.

Schedules for IMSA’s two Porsche GT3 Challenge Cup series were not released on Wednesday.  There will be additional announcements made pertaining to the 2021 season over the next couple of months.