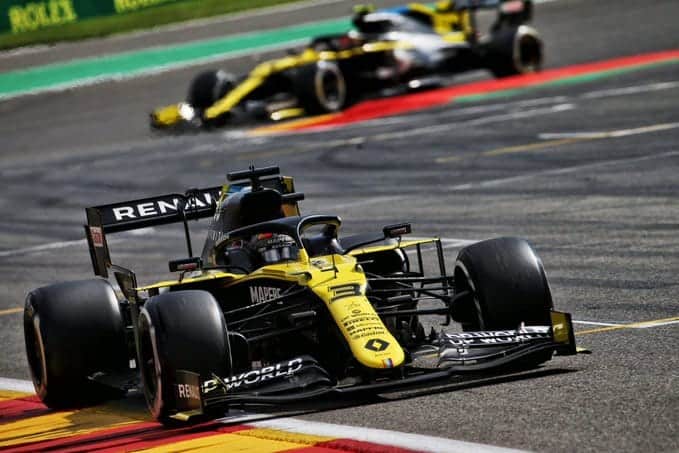 The second biggest news item coming out of Monza last week was the announcement that the Renault DP World F1 Team will be rebranding itself at the end of the 2020 season.

This announcement marks the third F1 rebrand in the last three seasons, with Alfa Romeo and AlphaTauri being the last two. And for most Renault fans the questions now arise: Just what the heck is Alpine? And how will this rebrand benefit the team?

So it makes sense to start out with the easily answered first question. What is Alpine?

In the simplest terms, Alpine is the racing and performance car branch of Renault Automobiles. Since the beginning of Alpine in the early 1950s, they have had a close partnership with the French automaker. Alpine’s founder Jean Redele actually got his start customizing Renault 4CVs into racecars, which he called the “Alpine A106.” Using these cars, Redele would race at tracks like Le Mans and Sebring, eventually drafting some help to expand his little organization.

In the early 1960s, Alpine basically became best friends with Renault. The two organizations worked closely on the development of the Renault R8, which Redele turned into the Alpine A110 Berlinette. As time progressed the brand expanded to competition in the World Rally Championship, and Alpine managed to best Porsche, Ford and a famous car made by Lancia called the Stratos.

In 1971, Alpine joined the open-wheel market building both F3 and F2 cars. They won their first championship with Jean-Pierre Jabouille in the European Formula 2 Championship in 1976. Alpine won one final F2 championship in 1999 with Rene Arnoux, before focusing their effort on both Formula One and Le Mans.

Alpine was acquired by Renault in 1971, and one of their tasks was to help build their F1 program. Debuting in 1977 with Jabouille driving for them, it took the Alpine Renault team two seasons before the aforementioned Jabouille went to victory lane in 1979 at Dijon. The partnership continued until 1985, when parent company Renault folded their F1 team, starting a nearly 17-year absence from F1.

As well all know, Renault came back with a vengeance in 2002. Showing decent results before winning consecutibe titles in 2005 and 2006 with Fernando Alonso, the same man who will pilot an Alpine entry in 2021.

What has Alpine done in the meantime? Well, they continued to make sports cars.

Between 1983 and 1995, Alpine pretty much did their own thing as a road car manufacturer. Occasionally teaming up with Renault to create racecars and other high-performance vehicles, they opened up a huge factory in Dieppe and the Alpine brand became a big one in Europe.

Renault took over that factory and announced it would start to produce Renault’s new line of high-performance sports cars. Alpine produced the Sport models of the Megane and the Clio, as well as two prototypes called the DeZir and the A110-50.

With the success of Renault on track, it relaunched Alpine in 2013. Alpine was back to producing road-legal sports cars for Renault, as well as some under the Alpine brand. Renault also partnered with Signatech to field a team in the European Le Mans Series, Alpine would use the current Oreca 03, 05 and 07 chassis to create their own. In typical Alpine fashion, they tinkered and improved until they created the A450, A460 and the A470. The improvements may have been minimal at best, but it didn’t stop the team from claiming a championship in 2013.

In 2017, Alpine launched its first road car in nearly 20 years. Sticking with tradition, they called it the, you guessed it, Alpine A110. With a name and design reminiscent of their first street sports car, the brand’s resurgence made it a no-brainer for Renault to bring them back to F1 in 2021.

What Can the Rebrand do?

This may come as a stab to the heart for the Renault faithful, but a rebrand doesn’t 100% mean the team will get better. This season we saw Toro Rosso become AlphaTauri, and stunningly win a race. However, it didn’t win on speed. The team wasn’t the team to beat like they were in 2008. For AlphaTauri nothing changed from Toro Rosso except the coat of white paint on the car.

The other team rebinding alongside Alpine will be the Racing Point team. Due to Lawrence Stroll’s investment in Aston Martin, the team will become Aston Martin Racing in 2021. This situation is a little different, as this team will be rebranded based on an investment rather than a different brand under the same umbrella.

There is a complete possibility that Aston Martin’s influence will help grow the team on track, but the reality is the Aston Martin name is just that, a name. While the brand is historic, unless Racing Point actually gets technical assistance from Aston Martin themselves, it won’t really make much of a difference.

That brings us to Alpine.

I hate to say it, but I just don’t see the team really improving 10 folds due to the rebrand. Will it help with team morale and make for nicer looking cars? Probably. Will it put the team on par with Mercedes? No.

I think this move, as surprising as it was, is good for Renault. Their brand hasn’t really been the same since 2008 and crash-gate, so a new name and coat of paint could serve them well. The team will remain a Renault works team, but with the new rules and cars coming next year who knows what can happen.

I have good hopes for Alpine because I like most journalists want a more evenly matched F1 grid. With the possibility of F1 experimenting with F2 style grid inversions, look for Alpine to capitalize on that and possibly contend for more wins.