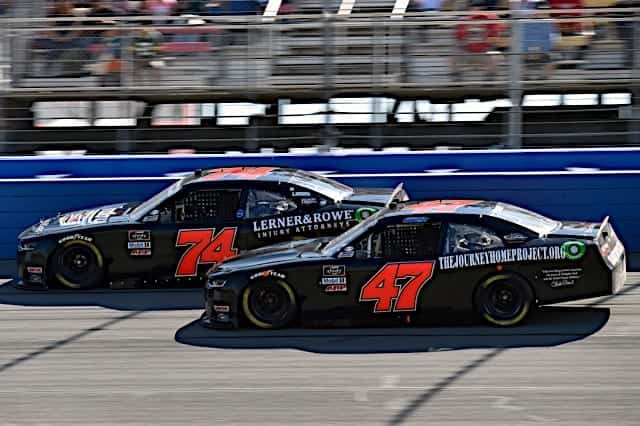 For years, Mike Harmon Racing was beaten down and continuously joked about for its lack of speed. But on the performance side, the past two seasons have been a steady improvement for the small, underfunded race team.

Mike Harmon has owned a NASCAR Xfinity Series team since 2008, having scored just one top-15 finish in the team’s first 253 starts entering the 2020 season (Nicolas Hammann finished 15th at Road America in 2019). However, for the first time in team history, MHR was attempting to run two full-time entries in the series. During the middle of the 2019 season, he took over the ownership rights of the No. 17 car, which started off with Rick Ware Racing.

Over the offseason, that number was switched to No. 47. And with Joe Nemechek finishing 15th in the first race of the year, the team matched its top-15 total from all of its previous starts. Harmon finished just behind in 16th.

Prior to the COVID-19 shutdown, the team was average. In fact, it failed to qualify one of its cars into the race at Phoenix Raceway in March. It didn’t score another top-20 finish until the sixth race of the year at Charlotte Motor Speedway, when Bayley Currey finished 18th. That run started a streak of races where the Nos. 47 and 74 were competitive.

Twenty-one races into 2020, MHR has quintupled the amount of top 15s it had entering the season on a variety of different racetracks.

“It says we know what we’re doing,” Harmon recently told Frontstretch of the strong runs this season. “It just takes so much funding to have what you need to do it correctly and competitively. There’s a lot knowledge here. I’ve been racing all my life.”

Harmon added the team is leaps and bounds ahead of where it was last season, which was the team’s best year in Xfinity. He also believes running multiple cars helps the team, but because of that he’s working every day of the week, 14-16 hours per day, with just five other full-time employees.

The hard work is paying off, though.

In mid-July at Kentucky Speedway, Kyle Weatherman earned the team its first top-10 finish, placing eighth in the first race of the doubleheader weekend. For both driver and owner, that was a colossus night.

“It was real big because we beat some big-money cars, and that’s a good feeling to do that,” Harmon said. “That’s why we’re there. We’re competitive people, and we want to be competitive on the track. … We definitely won our race that day.”

Weatherman, who competed in seven races for Harmon last year, having built a relationship through RWR said, “That was absolutely 100% a win. I think the cool part was, it was an actual solid eighth-place finish. It wasn’t like a lot of cars wrecked.

“Mike Harmon is the kind of guy that doesn’t show a whole lot of emotion. Obviously, he has a lot of passion and cares about everything he does, but he’s a pretty humble guy. To see a big smile on his face after the race and get a big bear hug, there was a lot of emotion on both ends.”

A big part of that finish was the team had sponsorship – something its struggled with since it started fielding teams in 2008 – with Back the Blue, which has been Weatherman’s primary sponsor in seven races this season. Because the team had additional funding, Harmon says his tire bill for that weekend was over $28,000. Reflecting back, he stated the team has never had that high of a tire bill in one month, let alone a single race.

Along with Weatherman’s top-10 finish at Kentucky, he’s scored top 15s at Pocono Raceway in June and the inaugural event on the Indianapolis Motor Speedway road course. Meanwhile, Currey finished a career best 14th just two weeks ago on the Daytona road course.

Both drivers, who have combined to run 31 races for MHR this season, have watched the team evolve to a consistent top-20 threat.

“We have our good weeks, and we have our bad weeks, but the good weeks have been really good lately,” Currey said. “We’ve done pretty darn good, honestly. I’m pretty proud of the guys, the work they’ve done and the results they’ve been able to achieve.”

Weatherman believes having more seat time has been invaluable this year towards taking the next step with the team.

“With racing and the industry that we’re in, you can have a big chunk of what you need, but when it comes down to little detailed stuff, having the correct people work on it and just the little stuff, it all adds up,” he added. “What really helps is having consistency with me driving and getting consistent feedback and getting the cars better is really important.”

Both Currey and Weatherman are pure racers, starting off at the local levels before moving up the ranks. Currey remembers racing against his now-teammate in bandoleros when he was approximately 10-12 years old.

While both have become the primary drivers at MHR, they also work together at Rick Ware Racing. In fact, Weatherman is one of the underneath mechanics for the No. 27 Cup car. Once they’re done with the job that pays the bills, they help out at MHR on its racecars.

Essentially, Harmon could put any driver in the car should the team or that driver have the funding. But he thoroughly enjoys having the two drivers in their young 20s around.

“They’re both fast, and they don’t tear up stuff. That’s the first thing,” Harmon said. “They work hard, not spoiled, not rich kids with someone paying the way for them, and it just plays into our organization. I build this team from hard work, from nothing. They’ve basically done the same thing when given the opportunity, just not at this level.

“Both of them remind me of myself as a youngster. They want it as bad as I did, and that’s what I like.”

And even though the team is lesser-funded than most teams around it, both drivers aim to overachieve on a weekly basis.

“I like to set my goals high, especially because we’ve been to most of the places we’re going to now,” Weatherman said. “… I think we’ve definitely gotten to where we’re at least a 15th-place car, so I guess that’s where my expectations start, but obviously I want to do as well as we can do each and every week.”

“Just try to make it to the end of the race and hopefully we’re in the top 20,” Currey said. “We’ve been trying to find – Kyle has been able to find some good runs. Top 15, a top 10, and we’re just trying to fight and get both of us up there.”

In the owner’s standings, the two cars are separated by just 14 points, sitting 33rd (the best the team finished in owner standings, 2013) and 34th, respectively. But the points don’t do the team justice, earning 11 top-20 finishes. Prior to this year, the team had four in its 12-year history.

Harmon, who has only competed in a pair of races this season (also entered to drive the No. 74 in Friday’s race at Daytona), including his career-best effort in the first race of the season, admits he misses being behind the wheel, though hasn’t dwelled about it too much.

“I miss it, there’s no doubt about it,” Harmon said. “But as busy as I am at the racetrack and keeping things organized for two teams, I don’t know how I could drive. I’m not hanging the hat up yet.

“Next year might be a different story; I might race a different type car or let somebody run for points over here in Xfinity, that makes a lot of money at the end of the year. That’s what I’m looking at.”

Over the years, Harmon had the opportunity to shut down shop. Hell, not long ago, the team was failing to make races regularly, and when it happened to make the race, it was a start-and-park effort, having DNFs in over half of its total starts. Going from that to competitively running inside the top 20 makes for a proud team owner.

“The last 10 years we’ve been beaten up pretty good,” Harmon said. “I’m very proud of [the team]. A top 20 is good, a top 10 is great and we’ve got more to come. We’ve surprised everybody so far this year and we’re not done, we’re not done.”

All parties agree that with the improvement in performance this season, the ceiling is limitless at MHR, knowing it’s behind the eight-ball until sufficient money comes through the doors.

“It really just comes down to funding,” Currey said. “The reason the funding is big is motors. We’ve got an older motor compared to some of those guys. … Mike spends the money he has in good areas to get gears, transmissions, a lot of the motors we’ve been getting are pretty good. The money is everything. There’s a reason those big-time Cup guys spend $35 million per year.”

But Harmon, who has been around the sport for longer than his drivers have been alive, noted, “You make the best out of everything around you. Don’t make excuses is something doesn’t go right, correct the problem, go back and do the best you can. The sky is the limit.

“If you get better, the funding is going to come and everything gets better. It’s just based on hard work, performance and how bad you want it.”

After its most recent top-15 finish on the Daytona road course, the team had a setback when one of the its haulers with all of its tools was stolen outside of a Kingsland, Ga. hotel. The team has yet to find the thief.