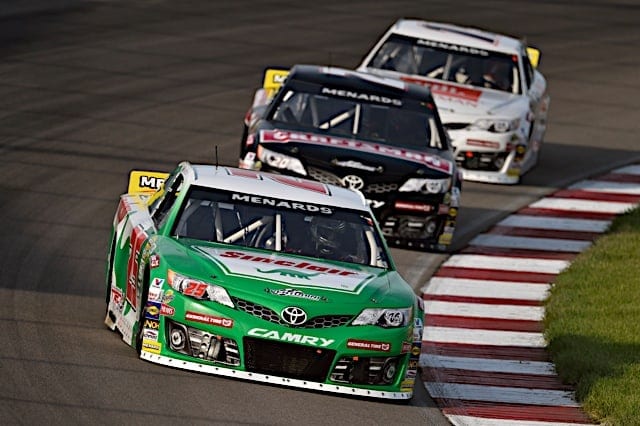 World Wide Technology Raceway at Gateway is the site of the 13th race of the ARCA Menards Series season and the seventh race of the Sioux Chief Showdown, a mini-championship within the larger ARCA championship. The race will occur Saturday, Aug. 29, the day before the NASCAR Gander RV & Outdoors Truck Series also races there.

The Dutch Boy 150 will be the ninth ARCA installment at the 1.25-mile track in Madison, IL.

Ty Gibbs won this race one year ago. He will be only the winner at the track entered in this field.

Gibbs led 32 of the 120 laps en route to winning by 0.649 seconds ahead of last year’s ARCA champion Christian Eckes. Gibbs already leads with three victories. Can he become the first driver to win more than one win at Gateway?

Several current drivers competed in that 2019 Gateway race. Sam Mayer led nine laps, including leading when the white flag flew but finished third. In addition to racing in the ARCA race at Gateway this year, Mayer will also wheel the No. 24 GMS Racing Chevrolet in the Truck Series race.

Smith finished 16th, 59 laps down, after starting fourth in the 2019 Gateway race. Smith is currently second in the Showdown point standings, two points behind teammate Michael Self.

Last year at Gateway, Self started first and led 41 laps. However, a broken axle relegated him to 13th place with a DNF. As the points leader of both ARCA and the Showdown, Self cannot afford any issues, mechanical or on-track. With his victory at the Daytona Road Course, Self increased his ARCA points lead over Bret Holmes.

“Gateway is a really fun track,” Self said in a team release. “It’s fairly technical for an oval, with two totally different corners, but I enjoyed racing there last year. We were able to start things off with a bang and qualify on the pole, then lead the most laps, but mechanical issues took us out of the race early. I’m hoping we can capitalize on our momentum from Daytona and rebound from last year.”

In two starts at Gateway, Holmes has two 10th-place finishes. However, both finishes were worse than his starting positions. Holmes should start fifth in this race compared to Self, who will lead the field to the green flag.

Hailie Deegan is tied for third in the point standings. She is 56 points behind in the ARCA standings and 22 points behind first place in the Showdown standings. She has competed at Gateway in the formerly known NASCAR K&N Pro Series combination races in 2018 and 2019. She finished ninth last year, though she only improved one position upon her starting position. Deegan is still seeking her first career ARCA win.

“I am going to race them hard for the win,” Deegan told Speed 51 about her outlook for the race. “The reason I wait until the last lap is that’s what my coach has told me to do. If it’s on the last lap, they don’t have any time to get back to you.”

Taylor Gray will drive the No. 17 DGR-Crosley Ford in this race. In five starts this season, the 15-year-old has become a quick study with only one finish outside the top 10, 11th in the second race of the Toledo Speedway doubleheader.

Drew Dollar is tied with Deegan in the ARCA standings, and both drivers are battling for the Rookie of the Year Award. In his lone start at Gateway last year, Dollar started ninth and finished sixth. Of those drivers from last year who are competing this year too, Dollar was third-best. Can he make it back-to-back wins for Venturini Motorsports after Self won at the Daytona Road Course?

“Gateway was one of two ARCA starts I was able to make last year, and I really liked the track,” Dollar said in a team release. “I’m confident I’ll be up to speed quickly there and that we’ll be competitive.”

Hattori Racing Enterprises is fielding its East series driver Max McLaughlin in the No. 1 Toyota.

“I feel like Gateway might owe us one after last year. We had a really good car and got caught up in a mess on the first lap,” McLaughlin said in a team release. “This is the same car we had at Gateway last year, and we were definitely strong in practice. It’s a fun place to get around because the two ends are so different and it’s a unique challenge as a driver.”

Rev Racing will also field Chase Cabre and Nick Sanchez in the Nos. 4 and 6, respectively.

Ryan Sieg is battling for a NASCAR Xfinity Series playoff berth, but his brother Kyle Sieg will make his second ARCA start. In his first career start at Lucas Oil Raceway, he started 14th and finished tenth, four laps down.

.@KyleSieg39 is back behind the wheel of the #41 car this Saturday for the @ARCA_Racing event Gateway. We are thrilled to welcome @SteriInc as they primary sponsor. Bruce Cook and his team will again oversee the effort. pic.twitter.com/8dHOkUVRGS

There will be no qualifying for this race. The starting lineup will be set via the Showdown owners’ points.

There will be a half-hour practice session before this race. The race will be divided into three segments, with breaks set at laps 40 and 80.

The Dutch Boy 150 will take place on Saturday, Aug. 29 at 6 p.m. ET with TV coverage provided by MAVTV and TrackPass on NBC Gold.

Too bad this one’s not televised. I really enjoy ARCA, and Gateway is a great track.