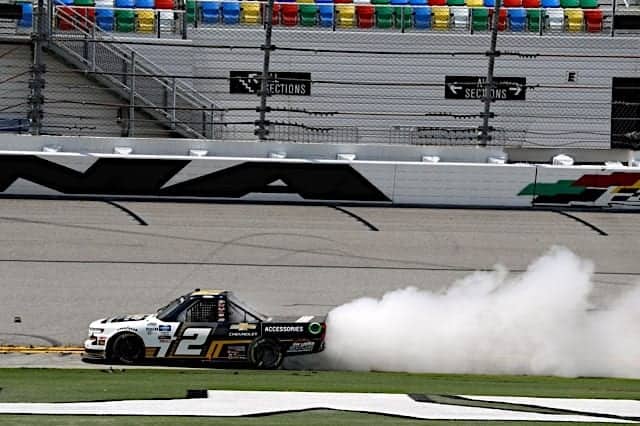 Pay the man! @sheldoncreed claims race No. 1 of the Triple Truck Challenge. He leaves Florida with a Daytona road course trophy and an extra $50k. pic.twitter.com/T8ZxMTjzlt

“My Mobil1 Toyota Tundra was awesome,” Lessard said. “Can’t thank everyone at Kyle Busch Motorsports enough. That’s what we’ve been working on all year, finishes like this. It hasn’t been easy for a rookie with all that’s going on, but I made a mistake when I was leading – pushed a little too hard. We never gave up and we fought back.”

But perhaps what’s more important for Lessard isn’t so much the third-place finish since he’s well outside of the playoff cutline on points (-82 back from Todd Gilliland in 10th). Instead, it’s a much-needed boost in momentum for the No. 4 team.

“I feel like we’re a little bit on a roll now. We had a pretty good week last week in Michigan,” he explained. “I felt like Michigan we had a winning truck there, but we had two flat tires. Came back and now I feel like we had a winning truck again and we finished third. It’s just about working hard. I’ve been wanting those results since the beginning of the season and we just keep on working. I think it’s coming. We’re going to push hard.

This season, in general, has been quite a bit more challenging for the rookie class than previous years have been because of the COVID-19 limitations plus the lack of practice and qualifying. It presents another obstacle for drivers who just aren’t familiar with racing a truck at each facility and have to learn on the fly once the green flag drops. But Lessard will have the benefit of previous experience at Dover International Speedway to lean on, along with the momentum of three straight top-11 performances.

“At Dover, I think with the new rules, we’re going to start pretty close to the front so that’s going to help us and especially that I’ve been there before,” Lessard added. “Last year was my second truck race there with Kyle Busch Motorsports. I think we’re ready. I love Dover, it’s awesome and track position is super important. It’s going to be good.

“We’re a team capable of winning for sure, I feel like I’m doing everything I can. I’m studying video, I’m asking questions – Kyle Busch is helping a lot. It’s just a matter of time. We’re pushing hard for it. At this point of the season, we’re not going for stage points, we’re going for the win. That’s what we’ve been doing the last few races and we’ve had our best finishes. We’re just going to keep on working and heading the right direction.”

After three straight finishes outside the top 25, Stewart Friesen found his way back inside the top 10 in Sunday’s race. But what the 10th-place run won’t show in the record books is that the team suffered power issues early in the event and had to make an early decision to change the alternator.

“It was a lot of fun. I love it,” Friesen explained. “We had an alternator fail right from the get-go. Trip (Bruce, crew chief) made a great call to come in and get it changed before too many guys were down a lap. We got our lap back and then just tried to race the racetrack. Be cautious, but be aggressive.

“It was probably one of the most rewarding top 10s of my life. I’m shocked but proud of the whole Halmar Toyota team. I’m really happy to get out of there with a top 10.”

For the No. 52 team, a top-10 run just isn’t going to cut it, though if Friesen wants another shot at running for the championship. He simply needs a win to bring himself inside the playoffs (103 points behind the cutline). But after the last three races, it’s a huge shot in the arm of a group that looked like it was flailing just to stay above water.

The key will be to take that momentum and use it to their advantage headed into Dover this Friday, a track that Friesen finished 12th at last season but crashed out of in 2017 and 2018.

Number of Rookies in Race: 8

Rookie of the Race: Lessard

?????? (P3)???
Best finish and race of the season so far ? We ran in the top-5 & top-3 for most of the race and led several laps. An unfortunate mistake cost us a few positions with only 14 laps to go when we were P1. AWESOME Toyota Tundra and teamwork!@Mobil1 @canac_ca pic.twitter.com/giycAdqnjw

Apologies to my @safelite team. Wheel hoped in the last corner and took away a top-10 and wrecked a truck. Had fun in my first road course race, wish we could have finished it off. Ready to move on to Dover!

Man first race on a road course in a stock car and it showed lol, made every mistake possible and delt with some interior issues. Appreciate my 21 team for never quitting. Onto Dover one of my favorites! pic.twitter.com/0KICHAhq5X

Could run top 5 times. Got in the back pitting. Got the RS Killed and broke a brake line bc of it. Gotta love getting drove over.. took our oldest oval truck and had a good shot today for a good run. Wish we coulda finished… @TeamSDM11 guys worked hard as usual.

Left heel took a beating today. Heat shield over my shoe couldn’t keep up today. Road course racing is always a blast and when you work your feet shifting so much you’ll get some blisters. The @DISupdates road course was a blast regardless. pic.twitter.com/A5JZzlbcfR

Points Update: Austin Hill maintains the top spot by 54 points over Brett Moffitt, who gained three positions following Sunday’s race. Last week’s winner, Zane Smith, dropped to third and its five markers behind Moffitt. Ben Rhodes and Christian Eckes round out the top five and are separated by a single point.

Sheldon Creed’s second victory of 2020 moved him up to sixth, while Matt Crafton dropped to seventh. Grant Enfinger remains in eighth, followed by Tyler Ankrum, who gained two spots and moved himself into the top 10 with a sixth-place finish. Todd Gilliland rounds out the top 10.

With four races remaining to set the playoff field, Ankrum holds a five-point advantage over Derek Kraus, who dropped to 12th after a dismal 30th-place run, while Gilliland has a slim two-point cushion. Tanner Gray, sitting 13th, is 45 below the cutline and will likely need a victory to make the playoffs.

Up Next: The Truck Series has a tight turnaround as it heads to Dover International Speedway for the KDI Office Technology 200 on Friday, Aug. 21. Coverage for the second race of the Triple Truck Challenge begins at 5 p.m. ET on FOX Sports 1; the race can also be heard on your local MRN affiliate or SiriusXM NASCAR Channel 90.