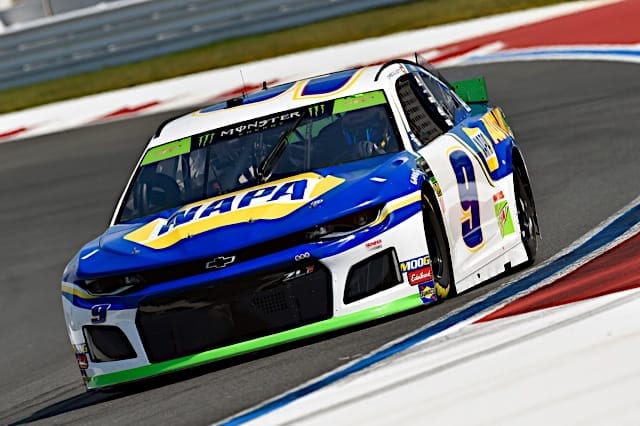 Journey with me into the unknown as you set your NASCAR DraftKings lineups for Daytona International Speedway. NASCAR Cup Series teams will tackle the twists and turns of Daytona’s road course in the Go Bowling 235 on Sunday, Aug. 16, at 3 p.m. ET.

Not only is this Cup’s first road course race of 2020, but it’s also the inaugural event on this configuration for the series. The course, which was originally set to debut in next year’s Busch Clash, replaces Watkins Glen International due to New York state’s COVID-19 restrictions.

Like the Charlotte Motor Speedway ROVAL, the Daytona road course combines the high-banked oval with a winding infield. It has 14 total turns, including two chicanes that should help lower speeds on the oval portion of the track.

What makes this race so hard to handicap for daily fantasy? Drivers will be going into turn 1 without any prior on-track experience, at least in this series. As you may recall, NASCAR announced there wouldn’t be any practice or qualifying for the rest of the season, so the pace laps will be their first trip on the infield in these cars. As if all that weren’t enough, there’s rain expected for this weekend, which could affect visibility. It should definitely make for an entertaining race.

Even though Sunday marks the first Cup race on this course, many drivers competed there in IMSA or the IROC series, including Jimmie Johnson, Michael McDowell and Kyle Busch. Still, the sports cars are very different from stock cars, and it’s been 14 years since IROC raced there.

Since there’s only 65 laps on this 3.61-mile track, there won’t be many DraftKings points available for laps led and fastest laps. Therefore, you’ll more than likely want high-place finishers in your lineup, as well as ones who can gain the most positions.

Remember, DraftKings awards 0.50 points for each fastest lap and 0.25 points for each lap led. Additionally, the site adds or subtracts a point for each position a driver gains or loses on track. Finally, the driver in first scores the most points (46). Second place gets 42 DraftKings points, third gets 41, and so on. The key in Daily Fantasy NASCAR DraftKings is not only to target the best drivers but the ones who gain the most positions from where they start.

Before I move onto this week’s picks, I’ll review what happened last Saturday at Michigan International Speedway.

Even with a dud from Austin Dillon on Saturday, this lineup still did fairly well. It earned $1.50 in the $1 Happy Hour tournament and cashed the single-entry $1 double up.

Note: The following is a sample NASCAR DraftKings lineup for Saturday’s race; you can use this information to create your own.

Elliott is a favorite coming into this weekend, and for good reason. He’s won (and dominated) the last two races at Watkins Glen and led all but 10 laps in 2019. Also, the No. 9 Hendrick Motorsports driver led 35 laps en route to victory at Charlotte’s ROVAL last season. Who could forget his recovery from crashing into the TUMS Heartburn Turn and celebrating in the exact spot after claiming the victory? He should adapt quickly to the new layout and possibly tack on a win at Daytona.

While Elliott excelled at WGI, Truex has reigned at Sonoma Raceway in recent years. Truex led 121 total laps in the past two races there, both with slightly different configurations. Additionally, the No. 19 Joe Gibbs Racing Toyota pilot placed first at WGI in 2017 and was runner-up to Elliott from 2018-2019. Lastly, at the inaugural ROVAL race Truex was well on his way to the win before Johnson crashed into him coming out of the final chicane. He still came home seventh last year.

Since there’s not as many drivers priced above $10,000 this week, you can comfortably fit Truex and Elliott, who are both getting +400 to win this one outright, in your lineup.

Although Jones hasn’t won on a road course in the Cup Series, he has performed well at Sonoma and Watkins Glen. He has two top fives and three top 10s at WGI, earning his track-best finish of fourth last season. Also, in the past two races at Sonoma he drove his way through the field to earn an eighth and ninth.

Jones has something to prove since he’s out of a job at the end of 2020, so a good result at this new course could attract race teams. It would also help your DraftKings lineup, since he’s starting mid-pack in 20th.

Gaughan doesn’t race very often, but when he does, he’s a popular play on DraftKings. This week should be no different, as he’ll start at the very back of the field. Because of that, he won’t lose any position differential points.

While the No. 62 Beard Motorsports driver hasn’t had many Cup starts on road courses, he has raced at Daytona. He earned a win in the NASCAR Rolex Grand Am Sports Car Series in 2011 and has competed in the Rolex 24 three other times. Hopefully, Gaughan will pass several cars Sunday to help boost your DraftKings score.

McDowell is another road course veteran, though he has yet to earn a top 10 in this series. However, he did earn a NASCAR Xfinity Series victory at Road America in 2016.

The No. 34 Front Row Motorsports driver has some respectable results at some road courses recently. McDowell ended in the teens in the past four races at Watkins Glen, including a track-best 12th in 2017. Also, at Charlotte’s ROVAL he also ended in the teens and gained 10 positions in last year’s race to finish 12th. He, too will be a highly owned driver but should pay off his salary on Sunday.

You wouldn’t think that Ty Dillon would be one to target, but at this price, why not? In last year’s race at the ROVAL, Dillon ended several spots higher in 15th. Though he hasn’t had as many good results at WGI or Sonoma, his potential to gain a few positions is a good reason to place him on your roster. Dillon will start 23rd on Sunday, so if he gets a top 20, that would give him an OK score for your DraftKings lineup. That, combined with the winner and biggest mover, should be enough to help you cash in your contests.