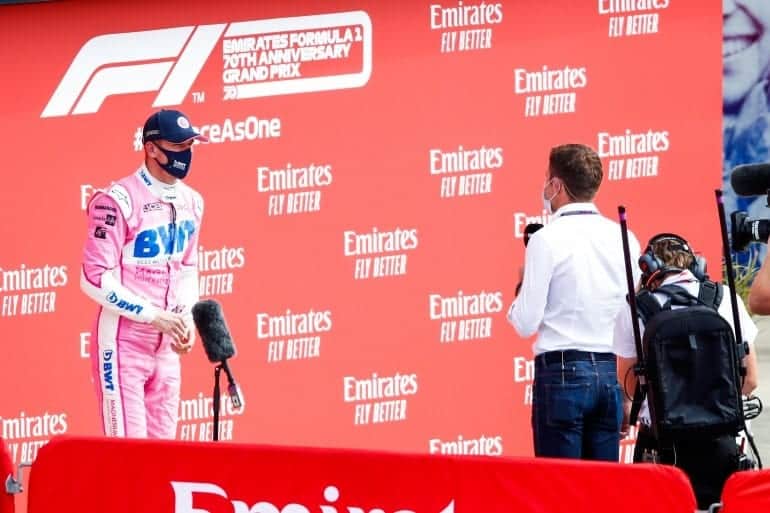 While Max Verstappen and Red Bull pulled off an impressive use of strategy and steady driving to best the Mercedes team, and Charles Leclerc slid into another fourth-place finish, Nico Hulkenberg managed to earn seventh in his return to the grid.

Hulkenberg, filling in at Racing Point for Sergio Perez who tested positive for COVID-19, had been scheduled to race in last weekend’s British Grand Prix.  He made his way through qualifying and would have started in 13th had he been able to actually start.

Instead, a sheared clutch bolt killed his car and he did not even pull out of the garage.  The Silverstone Grand Prix offered his shot at finally earning a podium finish.

With Perez ruled out again, Hulkenberg took to the Racing Point and posted solid practice times that he then backed up with a third-spot starting position.  The second-row position was an excellent way to shop his talents should any team suddenly have an opening or a desire for a reserve driver in the future.

Hulkenberg’s first start since the 2019 finale at Abu Dhabi started a tad slow as Verstappen pipped him for third going into the first corner.  But Hulkenberg held steady for much of the first stint of the race, maintaining fourth before falling behind Ferrari’s Charles Leclerc.

He continued in either fourth or fifth until lap 42, when he race took a sour turn.  He developed blisters on his rear tyres that throttled his performance.

He commented after the race about the difficulties with his tyres.

“Then I picked up some blisters on them from the rear axle and consequently fairly big vibrations that ultimately forced us to stop off that tyre and three-stopping then obviously onto P7.”

He knew that he did not have a shot at his elusive podium finish but he still eked out a seventh that would up just behind his teammate Lance Stroll.

Whatever dejection he felt he put aside to enjoy a decent finish and the return to the paddock.

“Well it’s not ideal and I just don’t understand because the second stint, that was all fairly straightforward and easy and usually it gets easier as the fuel comes out of the car.

“So I thought the third stint should be very straightforward, but it came differently, unfortunately, so we just need to see why that happened. But given all the circumstances, I’m very happy to be standing here with six points, to be honest.”

His remark about the points standings is somewhat comical considering he drove in just one race this season.  But still, with his six points, he now holds the 14th position in the standings, just 4 points behind Ferrari’s Sebastian Vettel.

His points from the 70th Anniversary GP this weekend show just how difficult it is to maintain solid performance, as seen in the comparison to Vettel, but also the skill that Hulkenberg still possesses.

For now, his showing at Silverstone is scheduled to be his last in the sport for 2020.  Perez is expected to return and other teams have secured their reserve driver situations to ensure that they need not make emergency calls to fill a seat at the last minute.

Hulkenberg’s return shows that he still has some value for a team looking for stable results and who has the respect of the grid.

However, if anyone expects that he’ll take a backmarker just to make his way back into the sport, they would be incorrect.

“I’m not desperate but certainly keen to be back on the grid,” he said.

But the response to his return has been overwhelmingly positive with team bosses and drivers alike remarking that Hulkenberg seems like he never left and that he still has F1 talent that was never tapped.

Maybe some day.  But for now, it’s just one day in a wild and peculiar season.