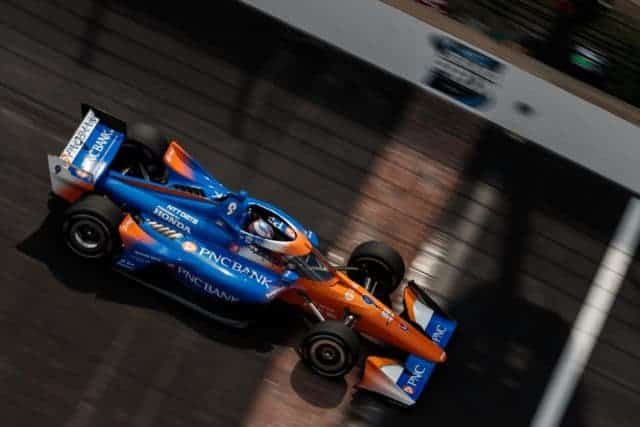 The 2020 NTT IndyCar Series season is still young, but it’s never too early to start thinking about championship implications. Here are the top contenders for the Astor Cup after two races—Texas (the 2020 Genesys 300) and IMS (the 2020 GMR Grand Prix)—as well as some drivers who are potential dark horses to enter into the title hunt.

Dixon has won both of 2020’s races so far, in both cases having done so with a commanding lead: a little over four seconds at Texas Motor Speedway and almost twenty seconds at the Indianapolis Motor Speedway road course. And while he hasn’t dominated in the sense that he leads almost every lap from start to finish, Dixon has proven that he and race strategist Mike Hull are a match made in heaven when it comes to finding the right strategy.

At this point in the season, one disastrous race for Dixon could knock him off the top of the championship charts, but it’s very hard to imagine that happening. He and his No. 9 Chip Ganassi Racing team are too well prepared to predict disaster at this juncture.

THAT’S YOUR WINNER! ??@scottdixon9 does it at the historic @IMS this afternoon! Back-to-back wins to start the season. ?#BankOnThe9 | #INDYGP pic.twitter.com/XjEKGnS9lA

Team Penske’s Simon Pagenaud currently sits in second place in the 2020 IndyCar championship standings with 75 points, just 29 less than Dixon—or the equivalent of one good race for Pagenaud and one poor one for Dixon.

With a second place finish at the 2020 Genesys 300 and a third place finish at the 2020 GMR Grand Prix, Pagenaud has shown that he’s ready to take this season head-on. It’s his best start to a campaign since he won the championship in 2016, and in a recent interview with Frontstretch, Pagenaud noted that he has his eyes on the prize and is already considering what it will take to bring home the overall trophy at the end of the year.

While Dixon looks to be the man to beat this year, Pagenaud’s consistency will be key. If he can stay poised to capitalize on the No. 9’s missteps, we could see the Frenchman climbing up the championship ladder.

? Whew, she was a hot one today! Put my heart and soul into that race and was so proud the No. 22 team recovered from starting 20th to finish on the podium in third! Amazing start to the 2020 championship campaign, but we missed the fans so much ? #IndyCar #BrickyardTriple pic.twitter.com/GpLDyTSllj

Josef Newgarden of Team Penske is currently sitting in an uneasy third place in the 2020 IndyCar championship standings with 64 points. That’s not bad but not ideal considering that fourth-place Colton Herta and fifth-place Graham Rahal are within ten points of usurping his position.

Newgarden had an impressive showing at the season opener, where he finished third,  but the GMR Grand Prix left a lot to be desired. A seventh-place finish garnered him a mere 26 points to add to his championship total, which saw him slip a little farther out of Dixon’s rearview mirror. No, he’s not out of contention this early—but he’s going to have to fight that little bit harder just to make sure he can stay ahead of the pack.

The best of the rest

No one is really out of the 2020 IndyCar championship yet. Even Alex Palou back in 24th has the mathematical potential to press back into the fold, but good sense prevails here with the reminder that some things will likely not happen, no matter how theoretically possible.

That said, there are a handful of drivers following the top three in the championship standings who have been impressive so far this season. They might not be the traditional picks for overall season winner, but they’re the drivers who have put together some frankly impressive—and consistent—finishes so far. These drivers might be the dark horses of the season.

Colton Herta has secured a fourth-place spot in the championship with a seventh and fourth place finish at TMS and the Indianapolis road course. He had a rocky rookie year in 2019, but his sophomore season looks promising. With a strong Andretti Autosport technical backing this year, he’ll have a better chance at smoothing out the worst of his lows. And if he manages to string together a consistent series of top-10s, all the better to keep his championship hopes alive.

Graham Rahal, too, will need to put together a stronger 2020 season—especially after his 17th place finish at the Genesys 300. With 54 points, he’s only a few top-fives away from rocketing up the leaderboard, but he has a lot of strong competition to contend with. That said, the Genesys 300 problems were mechanical in nature and his performance at the GMR Grand Prix proved what he’s capable of; if Rahal Letterman Lanigan Racing can bring a rock-solid car to the grid, Rahal knows how to drive it to the lead.

Zach Veach and Conor Daly sit sixth and seventh overall with 50 and 46 championship points, respectively, and have been two of the biggest surprises of the 2020 IndyCar season so far. Veach had an absolutely abysmal 2019, but a fourth and a hard-earned 14th so far this season have shown that the Ohio native is in far stronger form than ever before in his IndyCar career.

Daly will be moonlighting for two different teams in 2020, but a sixth place and a 12th place in two different cars shows that he’s keen to compete and has the skill to make two different cars work to his advantage. How long these two remain within sight of the championship, however, remains to be seen.