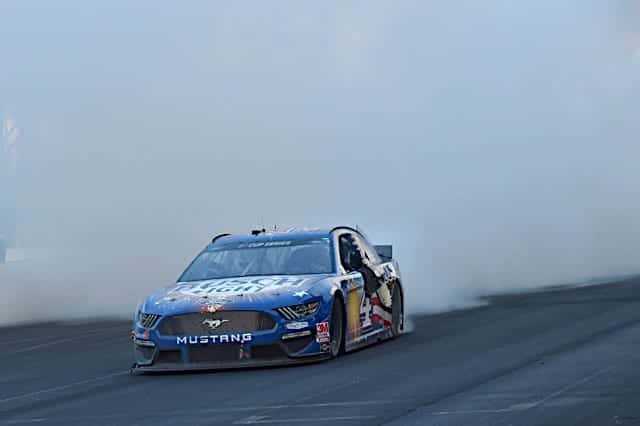 On America’s birthday, the NASCAR Xfinity Series took center stage, running the IMS road course for the first time in series history. What a freakin’ show! Then, on Sunday (July 5), Kevin Harvick proved yet again the 2020 championship is going to run through the No. 4 team. Harvick earned a second straight Brickyard 400 victory on the 2.5-mile oval track.

Which was the better race: oval or road course? I’ll let you decide that one as I run crunch some numbers that stood out on the NASCAR Stat Sheet this weekend.

Still thinking on which race was better, huh? Well, here’s a nugget for you: the first green-flag pass for the lead came on a lap 83 restart, shortly after halfway in the 160-lap event. Austin Dillon passed William Byron as the No. 24 car blew a left front tire down the backstretch. Yes, the first pass for the lead in green-flag conditions came over 200 miles into the race.

New leader: @austindillon3. It took 206 miles, but we got a pass for the lead while the race was green…. on a restart. #NASCAR

This trend isn’t new, though, especially for NASCAR’s crown jewel events. Flashback to Memorial Day Weekend and the Coca-Cola 600 didn’t get its first pass for the lead until 337.5 miles into the race. Yikes!

In theory, per mile, the Brickyard beat the 600, but it was on a restart! Not a good look for two-thirds of NASCAR’s crown jewel races this season. In fact, there was never a straight-up pass for the lead all race aside from restarts, green-flag pit stops and when Denny Hamlin blew a right front tire and pounded the wall on lap 155.

Unfortunately, this 550 horsepower, high-downforce package makes it all but impossible to pass the leader at many racetracks on the circuit. That’s showcased at a place like Indy when cars tend to string out single-file, even with a high-horsepower, low-downforce package.

Kevin Harvick won his third Brickyard 400 on Sunday, ahead of Matt Kenseth. That sounds familiar, doesn’t it?

A-ha, indeed, it does sound familiar. Let’s take a trip down memory lane, all the way back to Aug. 3, 2003. Remember what happened that day? Harvick won his first race at IMS. But the million-dollar question is, who finished second? Kenseth, you say? Yes!

In the 2020 Brickyard 400, a 44-year-old Harvick, now running for Stewart-Haas Racing, pulled away from a 48-year-old Kenseth on a late-race restart to score his fourth win of the 2020 season.

There’s a silver lining for Kenseth, though. The runner-up finish is his best result since winning at Phoenix Raceway in the penultimate race of the 2017 season.

Since taking over for Kyle Larson in the No. 42 car owned by Chip Ganassi Racing, it’s been a struggle for Kenseth. Yup, he finished 10th in his first race out at Darlington Raceway, but didn’t have another top 10 until Indy. All of a sudden, the oldest driver in the field had a shot at the victory, running top five for much of the event.

In my opinion, Kenseth is a top-15 driver of all-time. He, like drivers last season, had to adapt to the current aero package upon his 2020 return. It may have taken a little longer than he or CGR would have hoped for, but dating back to the doubleheader last weekend at Pocono Raceway, the No. 42 team now has three consecutive top-12 finishes.

Can Kenseth win to sneak himself into the playoffs? It almost happened Sunday. Don’t count him out.

Nice confidence booster today at @IMS. Great job by Chad and everyone on the 42 crew. Looking forward to @KySpeedway! pic.twitter.com/fX3k1OHepf

Prior to the 2020 NASCAR Xfinity Series season getting underway, Chase Briscoe threw out the number eight. It’s the number of victories he felt were needed in order to get a NASCAR Cup Series promotion come 2021.

Well, we’re only 13 races in, and Briscoe’s got five victories, giving him a win percentage of 38.5 for the season. What’s more? The No. 98 team could have at least three more wins if circumstances had tilted their way. Boom, there’s your eight… and we’re not even at the season’s halfway point.

If Briscoe doesn’t win eight, it will be a terrible rest of the season by his standards, as he’s proven the No. 98 car is the top dog in NXS this season. Speaking of top dog, Briscoe had to beat out two of the best road course racers in NASCAR on Saturday, taking AJ Allmendinger and Austin Cindric three-wide down the frontstretch with three laps to go. Unreal racing.

I loved the action. I love road course racing, always have, growing up an hour from Watkins Glen International. However, entering the weekend I was skeptical on if I ever wanted to see the Cup Series to run the IMS road course because, after all, it’s freakin’ Indy and the history of that track lies on the bricks.

Not anymore. You know that doubleheader last weekend at Pocono? Let’s move that to IMS, giving the Cup Series a race on the Indy oval and road course during the same weekend. I pledge my case.

This was an unbelievable feeling, I’ve came here throughout my childhood and always would cherish just looking at the bricks. Can’t believe a small town Indiana kid got to kiss them at @IMS. pic.twitter.com/fyNGJmoqe0

GABLE: WILL THE NASCAR-INDYCAR DOUBLEHEADER CONTINUE IN 2021?