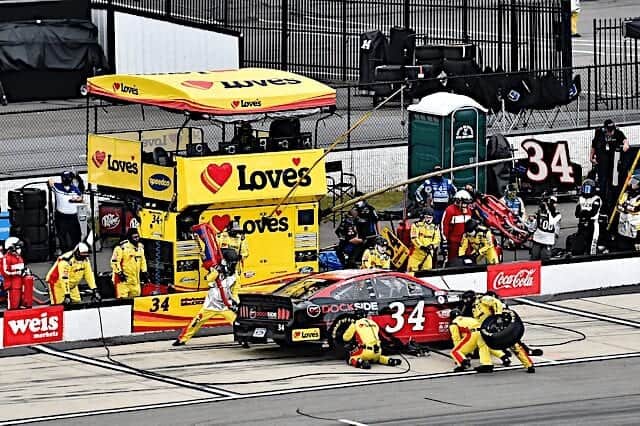 Front Row Motorsports has overachieved thus far in 2020, and Michael McDowell continued that trend in the first of two races at Pocono Raceway this weekend.

Via a random draw, McDowell began Saturday’s (June 27) Pocono Organics 325 from 26th position. By the end of the opening stage, the No. 34 Ford cracked the top 20, finishing 18th.

During the second stage, McDowell wheeled the No. 34 car up to 16th on the leaderboard.

But the final stage is where the Phoenix native stood out, passing Ryan Newman for the lead during a cycle of green-flag pit stops. Needing just a splash of gas and a quick two-tire stop, McDowell got back on track during the cycle in ninth, moving up to eighth at the checkered flag, earning his first top-10 finish of the 2020 season.

“That was an exciting run,” McDowell said post-race. “Drew [Blinckensderfer] made a great call, strategy was a big part of it today. Our car was really fast on the long run, which let us stay out long and make good lap times and ended up taking two tires there at the end to get some track position.”

The eighth-place finish was McDowell’s ninth career top-10 finish in 335 career NASCAR Cup Series starts, spanning over 13 years. It was his best finish on a non-superspeedway track, bettering a 10th-place results at Homestead-Miami Speedway in 2016 with Leavine Family Racing.

That in itself is a statement from both McDowell and Front Row.

“It means a lot to me because for so long I had to grind it out,” McDowell told Frontstretch. “Six years of starting and parking, so to be having my best season yet means more than most because there were times I started to lose hope that I wouldn’t get the chance.

“I am thankful to Bob Leavine and LFR that took a chance [on me] back in 2014 [to] 2017. Thankful to Bob Jenkins for allowing me to race at Front Row Motorsports. These are the best cars I have sat in and we have made huge gains over the last three years. I am thankful I am still here and getting to see the fruit of it. We have great people and that is what makes cars go fast.”

Dating back to the ninth race of the season at Bristol Motor Speedway, McDowell has four top-15 finishes in the past six races – a career-best streak. FRM is on a career-best streak, too, as McDowell’s eighth-place finish on Saturday and John Hunter Nemechek‘s eighth-place finish on Monday (June 22) at Talladega Superspeedway marks the first time the company has had consecutive top-10 efforts.

Through 14 races this season, McDowell sits 22nd in the championship standings, 59 points behind the coveted 16th position.