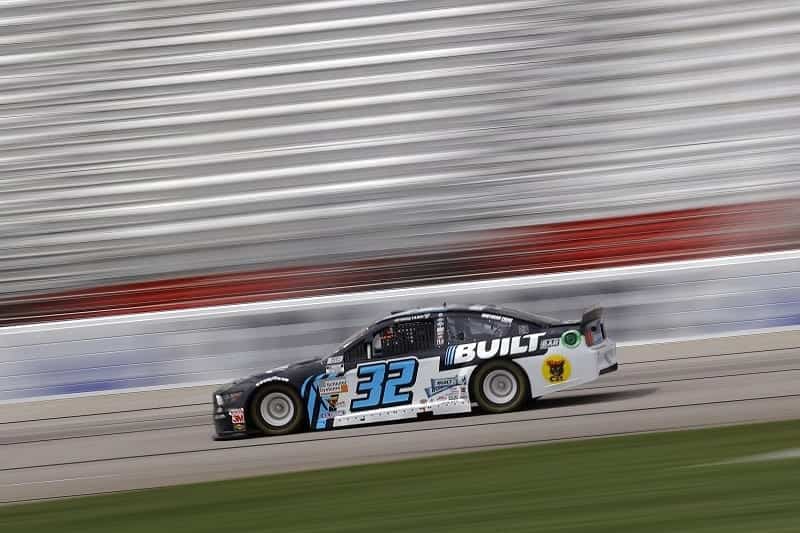 For Corey LaJoie, the 2020 NASCAR Cup Series season is a brave new world. He recently welcomed a new sponsor in Built Bar—the company’s first-ever such partnership—and will carry their branding for multiple races on the 2020 Cup Series schedule.

It also happens to be his second full-time Cup Series campaign, so he and his Go Fas Racing team are looking to take the No. 32 Ford to the next level. Corey recently spoke to Frontstretch about the unique way he got started with Built Bar, the sponsorship concerns every driver deals with, and how Corey LaJoie is approaching the 2020 season with its various changes and challenges.

Brittany Frederick, Frontstretch: How did the Built Bar collaboration happen? Was this a traditional sponsorship deal or was it a product you were already familiar with?

Corey LaJoie: A buddy of mine, Andrew Stalling, [has] been trying to help me dig up some personal service deals or partners to get on the car, and I’m always sending him a couple of companies. Once a week I will send him a company. I’ve had several Built Bars before, and I said, look into these guys. They started doing some digging and got in touch with the right people on the right day, and they saw some value in our sport and jumped on. I think they’ve been pretty happy with how the partnership has been so far.

FS: Sponsorship is a crucial part of the racing game, especially for drivers on smaller teams like yourself. Can you discuss what you go through on the business side of NASCAR?

LaJoie: There’s a lot of layers to it. Sponsors and partners are what makes the engine go, excuse the pun. Our sport is really expensive, but it also has a lot of returns for the partners that can activate it right. Whether it be consumable product like Built Bar is, or another great supporter of mine is a company called Schluter Systems, and they use it for hospitality, bringing people out to the racetrack. There’s lots of different ways that companies can get a return on their investment through NASCAR.

FS: With this sponsorship came a new Built Bar paint scheme that fans saw debut at Atlanta. How much does a driver get to be involved in that part of the process?

LaJoie: Generally speaking, I’ll have some sort of input. I’m the one driving it, so I want it to look cool. I don’t know if you saw the car I ran with my face on it, with a face mask. I had brought that up as a joke, kind of a spin-off of our Daytona 500 Old Spice car from last year, and sure enough it got some legs and ultimately made it through back to the racetrack. (laughs) I probably should watch my mouth when it comes to offering jokes as ideas for paint schemes, because they might come back and bite me.

But when it comes to designing cool schemes, I’ve got a buddy of mine that designs it. You’ve got to try to stay brand-specific with the colors and the logos, and make people know that when they see that scheme on the racetrack, it’s directly related to the product we’re trying to push to them.

FS: You’d already had Built Bars before. How many more have you been sent, or consumed, now that they’re officially sponsoring you?

LaJoie: Lately we’ve been racing so much, I’ve been eating them quite a bit. I have a big sweet tooth, and usually I can open a half gallon of ice cream and chow down on that every night, but lately I’ve just been grabbing a Built Bar at night and that’s been kind of enough to scratch that itch.

We did a production day—a couple guys flew out from Utah, we were shooting some cool videos to put on social media and Built Bar’s website in the future—and they were making me unwrap Built Bars and take a bite for the shot. If I didn’t eat 300 single bites of Built Bars, collectively I probably ate 30 in one day. A couple days after that I didn’t eat any more. (laughs)

But overall, they taste really good and the nutritional content in them is really good as well, for people that live an active, healthy lifestyle.

FS: You mentioned the compressed NASCAR schedule this season. It also happens to be your second full-time season in the Cup Series. What’s been your approach this year, not only in dealing with the changes, but also just building on that 2019 season?

LaJoie: Just to try to clean up the mistakes we had. [There were] some mechanical failures last year and we had a couple this year, but we knew that if we could put races together and really not shoot ourselves in the foot, that we could probably beat some of the teams that have a little bit bigger of a budget. I think a lot of the weeks this year we’ve done that, and we have shot ourselves in the foot a couple times with mechanical issues that hopefully we’re going to rectify.

I think a lot of it is me going back to these same racetracks for the third and fourth time; applying that experience is huge, and also just continuing to build a notebook on setups. Especially right now, it’s crucial, because we’re not getting any practice. You see some of the drivers and teams that have a little bit deeper of a notebook rising to the top more so than the guys that don’t.

FS: How much has everything that’s happened in 2020 impacted your ability to keep learning and to build that forward momentum?

LaJoie: I do think a little bit of practice would help. We haven’t seen a whole lot of mechanical issues that would have been found in practice, but it doesn’t hurt to run through a change or two just to validate what your simulation is telling you…Those two or three hours that we used to get in practice are probably a little too much, but not having any for some of our marquee events is not doing justice to the sport.

I think NASCAR is going to find a good balance on what a weekend schedule looks like here once all the regulations and protocols are lightened up a little bit, and hopefully we can get right back to where we were.

FS: Is there anything else that you’d want fans to know as you look forward to the rest of the season, and the rest of your Built Bar partnership?

LaJoie: I think that it’s important to continue to build the relationships and partners that see value in the sport. I’m super-excited to continue working with Built Bar this year and in the future, because I think the assumption [about] race fans is that they’re out of shape and they’re smokers. I do think there’s a good percentage that are health-conscious, and if they’re looking for a good healthy snack to get some protein, they should go and buy some Built Bars.

For more information on Corey LaJoie and his partnership with Built Bar, visit Corey LaJoie Racing or Built Bar. You can also follow both on Instagram (@coreylajoie and @imbuilt).