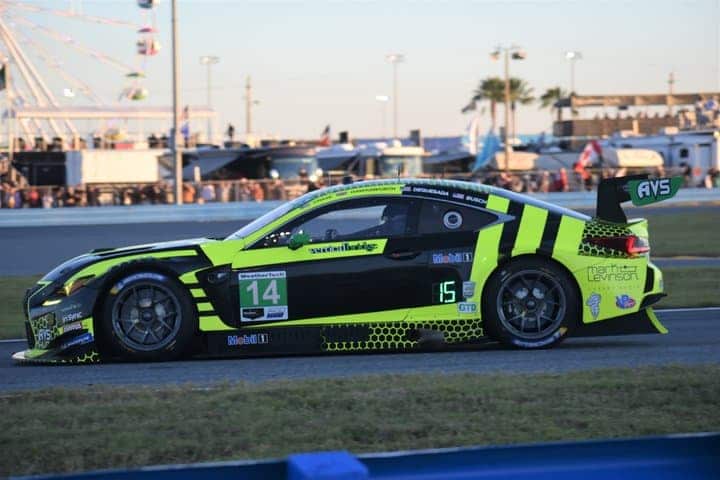 AVS Vasser Sullivan announced Wednesday (June 25) that Aaron Telitz has been tapped to drive the No. 14 Lexus alongside Jack Hawksworth for the remainder of the 2020 IMSA WeatherTech SportsCar Championship season.  Telitz replaces Parker Chase, who opted out of the rest of the season earlier this week after determining that it would conflict with his education.

Upon receiving the news, Telitz was quick and to the point on Twitter.

Telitz was originally scheduled to drive the team’s No. 12 Lexus in the four Michelin Endurance Cup events, similar to last year.  He finished 12th in the GT Daytona class at the Rolex 24 at Daytona back in January.  In five career starts in the IMSA WeatherTech SportsCar Championship, Telitz has one podium finish, a second-place finish in GT Daytona during last year’s Rolex 24 at Daytona in his series debut.  The upcoming WeatherTech 240 at Daytona will be Telitz’s first career sprint race in IMSA.

Despite his experience in the Lexus, Telitz’s background is in open wheel racing.  He has spent the last three years racing in Indy Lights for Belardi Auto Racing, full-time for the first two years and part-time in 2019.  In 39 career starts, Telitz has three career victories, 11 podium finishes and three poles.  He finished sixth in points both years that he ran full-time (2017-2018).  INDYCAR previously announced that Indy Lights will be taking 2020 off.  Prior to racing in Indy Lights, Telitz won the Pro Mazda (now Indy Pro 2000) championship in 2016.  As of right now, feeder open-wheel racing is in flux for 2020.  INDYCAR has already cancelled the Indy Lights season.  Making the move to sports cars is likely the best move for Telitz to get any track time this year.

Moving Telitz into the No. 14 full-time leaves a seat open in the No. 12 for the three remaining endurance events.  The team will need to fill that spot with a bronze or silver-rated driver prior to the next endurance round at Watkins Glen in October.