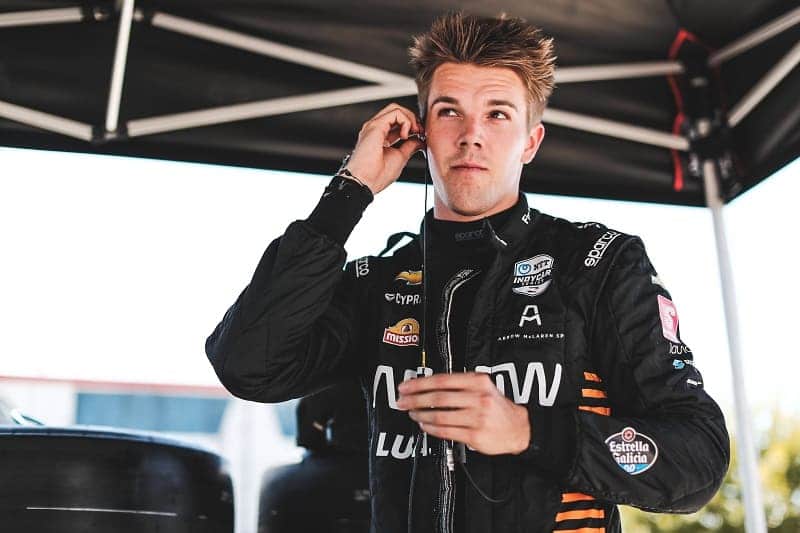 Oliver Askew is one of the NTT IndyCar Series’ most promising rookies in the 2020 IndyCar season. Despite only racing professionally since 2015, Askew racked up two championships in U.S. F2000 and Indy Lights. His IndyCar debut was just as promising with a ninth-place finish at Texas Motor Speedway. If Askew can keep this up, he might just take home Rookie of the Year accolades in 2020.

Oliver Askew has been described by team advisor Robert Wickens as being an analytical kind of driver, who will take one step at a time to figure out where his limits are and then work on improving them as opposed to just running flat-out all the time. That’s a very mature approach to racing, one that knows how to preserve equipment and still be competitive. It’s going to be essential in a season with multiple double-headers, where no team can afford a damaged car dragging them down for two events in a row.

The rookie has already proved that he can bring home a solid result after his ninth place finish at Texas Motor Speedway—a truly impressive run for a driver who had never competed on that track before. Askew has proved to be a prodigious driver in his climb up the IndyCar ladder, and it’s very easy to see him bringing that skill with him into the big leagues.

An analytical driving style has its drawbacks—especially when it comes to an abbreviated season. While the 2020 IndyCar season hasn’t established a set race weekend schedule, practice times will undoubtedly be shortened and fewer races overall means a driver like Oliver Askew will have significantly less time in order to figure out the limits of his car and of himself as a driver. There’s just not time to go about things slowly and steadily, and that could come back to bite Askew.

He’ll also be competing against IndyCar’s top talent rather than being the top talent himself. While that may not come as a massive problem for Askew, he could very well find himself caught out by a competitive field that puts a damper on his results. Especially considering how many normally competitive teams were plagued with mechanical gremlins at Texas Motor Speedway, things will get much tougher for him quickly.

Oliver Askew’s level head and analytical approach will propel him to the fore in the latter half of the 2020 IndyCar season. A podium is in the future for Askew during the second races of double-header events or at a track like Mid-Ohio, where he has shone in the past. And if he puts together another consistent performance, Askew will be 2020 Rookie of the Year.