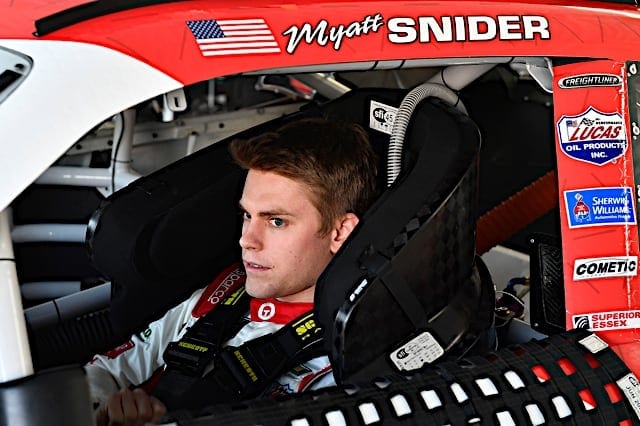 By virtue of his 15th-place finish in the 2020 Hooters 250 at Homestead-Miami Speedway on Saturday (June 13), Myatt Snider became the polesitter for the second race of the NASCAR Xfinity Series doubleheader this weekend.

Earlier this week, Snider announced he landed funding to become a full-time driver this season, splitting time between driving the No. 21 Richard Childress Racing Chevrolet and the No. 93 RSS Racing Chevrolet.

Starting second for for the 2020 Contender Boats 250 is Brandon Brown.

Chevrolet drivers round out the starting top five, as Justin Haley, Jeremy Clements, and Carson Ware will start third through fifth, respectively.

Ware and Daniel Hemric will drop to the rear of the field before the start of the race because they did not compete in the first race of the doubleheader. Hemric is slated to start roll-off 11th.

AJ Allmendinger, who won the race at Atlanta Motor Speedway, will compete in this race. He will start last (38th) because neither he nor the No. 16 Kaulig Racing team did not race in Saturday’s event. Allmendinger will be one of the four drivers competing in the second Dash 4 Cash race.

The other three drivers competing for the $100,000 Dash 4 Cash are Haley, Hemric, and Noah Gragson. Gragson will start in the seventh row in 13th place.

Due to the doubleheader, teams must use the same car for both races. Additionally, teams cannot change other components of the car or otherwise the driver is required to start at the rear of the field.

The Contender Boats 250 is scheduled to begin at 12 p.m. ET with TV coverage provided by Fox Sports 1.