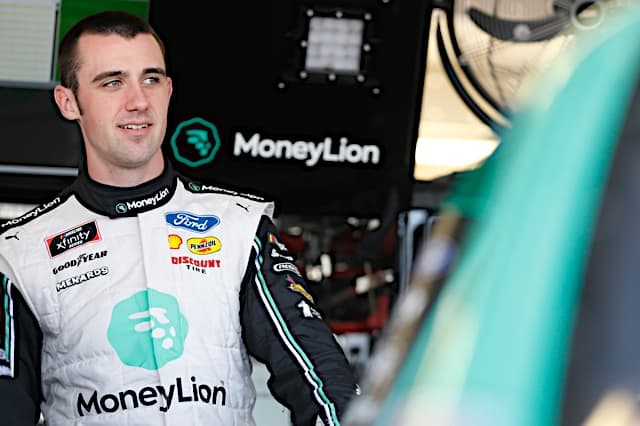 When Austin Cindric was introduced to the NASCAR world full-time in 2017, there’s no doubt he ruffled some feathers. That continued into 2018, his rookie season in the NASCAR Xfinity Series.

That year, Cindric split the season between Roush Fenway Racing’s No. 60 Ford and Team Penske. Whenever Cindric competed for Penske, he was competitive, nearly winning a few races. Running for RFR, though, was a nightmare, not only for him, but also Chase Briscoe and Ty Majeski, as there was seemingly a dark cloud hanging above that team.

Need proof? All seven of Cindric’s top-five finishes and 13 top 10s in 2018 came with Penske. His best finish in eight tries with Roush was 13th at Watkins Glen International.

As the North Carolina native matured throughout his rookie season, his sophomore season was even better: earning a pair of victories on road courses, scoring 14 top-five and 24 top-10 finishes and finishing sixth in points. His average finish for the 33-race schedule was 8.9, nearly chopping it in half from the previous season, when it was a disappointing 17.0.

Now, Cindric, in the midst of his third full Xfinity season sits again sixth in the championship standings, with an average finish of 12.1 through the first eight races of the season. He is, however, coming off a disappointing 16th-place result at Atlanta Motor Speedway, where he led a career-high 68 laps and won the first two stages. That comes two races after duking it out with all-time series wins leader Kyle Busch on the final lap at Charlotte Motor Speedway, ultimately finishing third.

From Cindric’s perspective, it’s been a solid start to the 2020 season, as the No. 22 team has put itself in position to have potentially won multiple races.

“I think we’ve been a great group of being able to execute and getting the most out of most weekends,” Cindric recently told Frontstretch. “I feel like Las Vegas [Motor Speedway] should have been a race win. Fontana [Auto Club Speedway], we were in a position for a race win. Obviously, Charlotte had great potential to be a race win, so we’re knocking on that door. That’s why it’s a little frustrating each time we get so close. If you keep knocking on that door, you’ll knock it down.”

Cindric admits that prior to the 2020 season beginning, his goal was to chase down the regular season championship and earn as many playoff points as possible. Sure, that first win on an oval is alluding him, but he believed the No. 22 team needed to come out of the gates strong, something he says he’s struggled with his prior two years in Xfinity.

Executing a full race, Cindric believes, has been one of his weak spots. But when his Team Penske group is on, he believes it’s a force to be reckoned with.

“When we’re at our absolute best, we can be the best,” Cindric said. “When we have an off day, it’s about execution at that point. I feel like we can find some stuff in our packages, and hopefully, that will be enough to put us in position by the end of the year.

“I think we made a lot of strides in the middle of last year on being able to do that. Obviously, that’s a great effort, and it’s showing right now by the guys at Ford Performance. Chase [Briscoe] and I have run up front all year, and granted, we’re in great equipment and we have great people around us.”

Cindric noted that through thick and thin, he’s there for his team. While other drivers with top-tier Xfinity teams may have a motorhome at the track or drive to the track themselves, he rides with his team. It’s something he’s done fully over the past two seasons, making his team aware he’s ready to do battle on the front line with them during the race. Post-practice or qualifying, it’s a quality tool because the group can converse about the day and discuss adjustments for the race.

“I’m the guy that goes to the racetrack with my crew guys, rides in the crew van,” Cindric said with a laugh. “I like hanging out with my guys. It’s not because I want to show face or whatever, it’s because I like doing it.

“It’s the same thing during the week, I’ll be at the shop almost all day, just hanging out, loading things, being present. … I enjoy all of that and it’s been really great to have the same core group of people around me the whole time. Those guys trust me, I trust them, and it’s another reason why I feel like we’ve been able to be so strong, is because we all know each other so well.”

That’s part of the maturing stage Cindric has seen within himself as a racecar driver since entering the Xfinity Series. Another is making internal challenges, such as rim-riding at Auto Club Speedway, knowing that’s something he’s going to have to do at the next level.

“I have a personal goal in mind knowing, if I don’t hit the wall and I run the fence all day, I can do that on Sunday’s,” Cindric added. “I’m really keeping tabs on myself and understanding how many racetracks I need to come back to and really be able to understand.

“Like Darlington [Raceway] and Charlotte were two of my absolute worst races last year. To turn those around into two top-five finishes and a shot at a win is a pretty big improvement for me. I feel like that’s something I’ve been good at in my career is having a bad day, being able to learn from it and know the reasons – not just come back and do better – why it didn’t work out.”

As far as making a run toward his first NASCAR championship, Cindric believes the team is relatively close, among the favorites in the series.

“I honestly feel like we’re 98% of the way there,” Cindric said of being a championship team. “That’s really close, but the last five percent is really close and really, really difficult to get. I expect to try and win races. We’ve been putting ourselves in position every race so far this year to be able to do that. I think we’re on the right track, but I think there are some improvements we can still make. I feel like we can get more out of ourselves and hopefully get that before the end of the year.”

For all intents and purposes, Cindric has utilized the Xfinity Series for exactly what it is: a developmental series for Cup. And should he win a few races, it’s not out of the question that he could be in Cup within the next couple of years.

Though he loves running in Xfinity, he hopes that jump to Cup is in the near future.

“I feel like after this year, I’ll be as ready as I’ll ever be,” Cindric said. “I think that’s been my goal throughout the year on a personal level is to be ready for that. There’s no internal expectations that I at least know of to be ready for that, but three years in the Xfinity Series, I feel like I’m ready for another challenge after this year. I can’t have Kyle Busch or Brad Keselowski in some races to gauge my level of improvement or need for improvement. I want to race against all of those guys every weekend because I want to see what the next level is.

“Do I think I’m the absolute best there is right now and could go take on the guys on Sunday? Probably not. I think on some racetracks I could hang with them and some racetracks I’ll probably have to learn a few things. Overall, yes, I think after this year, I think that will be an ideal time in my career to take that next step.”

Cindric confirms there haven’t been any discussions of making the jump to Cup in 2021. However, Keselowski, who drives Penske’s No. 2 car (and has two wins in 10 races this season) is in a contact year and has yet to sign an extension with The Captain.

“The thing that makes that move a lot easier, and you saw that with the guys last year, is winning races and winning championships,” Cindric said. “That’s my goal. That’s the number one way to make that become a reality. But at the same time, I’ve got to focus on myself and each week.”