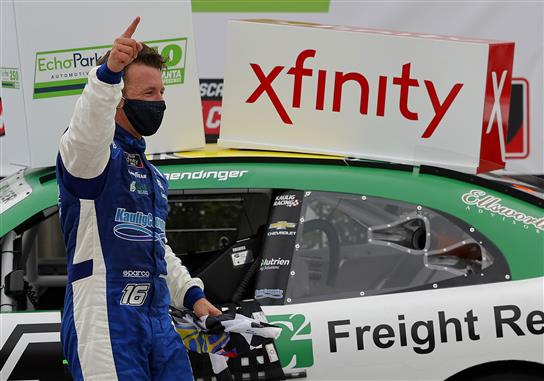 AJ Allmendinger didn’t have the fastest car but drove a smart race and made it count when it mattered. He got out front late and held onto the win on Saturday afternoon (June 6), scoring his fourth career NASCAR Xfinity Series victory in the EchoPark 250 at Atlanta Motor Speedway.

“I won on an oval,” A.J. Allmendinger exclaimed to FOX as he exited the car. “The car was awesome on long runs. The car was better early than the driver too. Once I got in the lead, I was trying to hit my marks, which is hard to do.”

"I WON ON AN OVAL!"- @AJDinger is a LITTLE excited pic.twitter.com/C83tZYJQKH

Justin Haley and Daniel Hemric finished third and fourth. The top four qualified to race for the Dash 4 Cash next week at Homestead-Miami Speedway, though Allmendinger and Hemric aren’t scheduled to be in the race.

Gragson led the first five laps of the race before Austin Cindric took over, who had the dominant car of the day. But Cindric pitted during the first caution, using a set of tires early while the rest of the field stayed out.

Cindric soared through the field after restarting 21st, and by the end of the stage, he had a nine-second lead over the field. Cindric captured the second stage win as well but lost the lead to Briscoe on pit stops.

Michael Annett inherited the lead briefly by not pitting but was quickly swallowed up by Briscoe and the rest of the field with fresher tires. Annett wound up in the 11th position. He had an extra set of tires on the field, but a lack of caution flags at the end prevented him the opportunity to use them.

On the final caution of the day for a spin for Vinnie Miller, the leaders pitted for their last set of tires. Cindric, who ran out of tires and was putting back on 18-lap used tires, was blocked into his stall. To add insult to injury, he was caught speeding on pit road. Briscoe and Allgaier were caught speeding as well, giving the lead to Allmendinger.

The California native held off Gragson as he tried to wheel the No. 9 up to Allmendinger, but Gragson could not catch the No. 16 car, and Allmendinger won for the first time on an oval. It was Kaulig’s third career win, and Allmendinger’s second with the team. The pairing’s first win came at the Charlotte Motor Speedway ROVAL last year.

Up next, the Xfinity Series will have two races at Homestead-Miami Speedway, with the first race being on June 13 at 3:30 p.m. ET on FOX. The second race will be the following day at noon on FOX Sports 1.