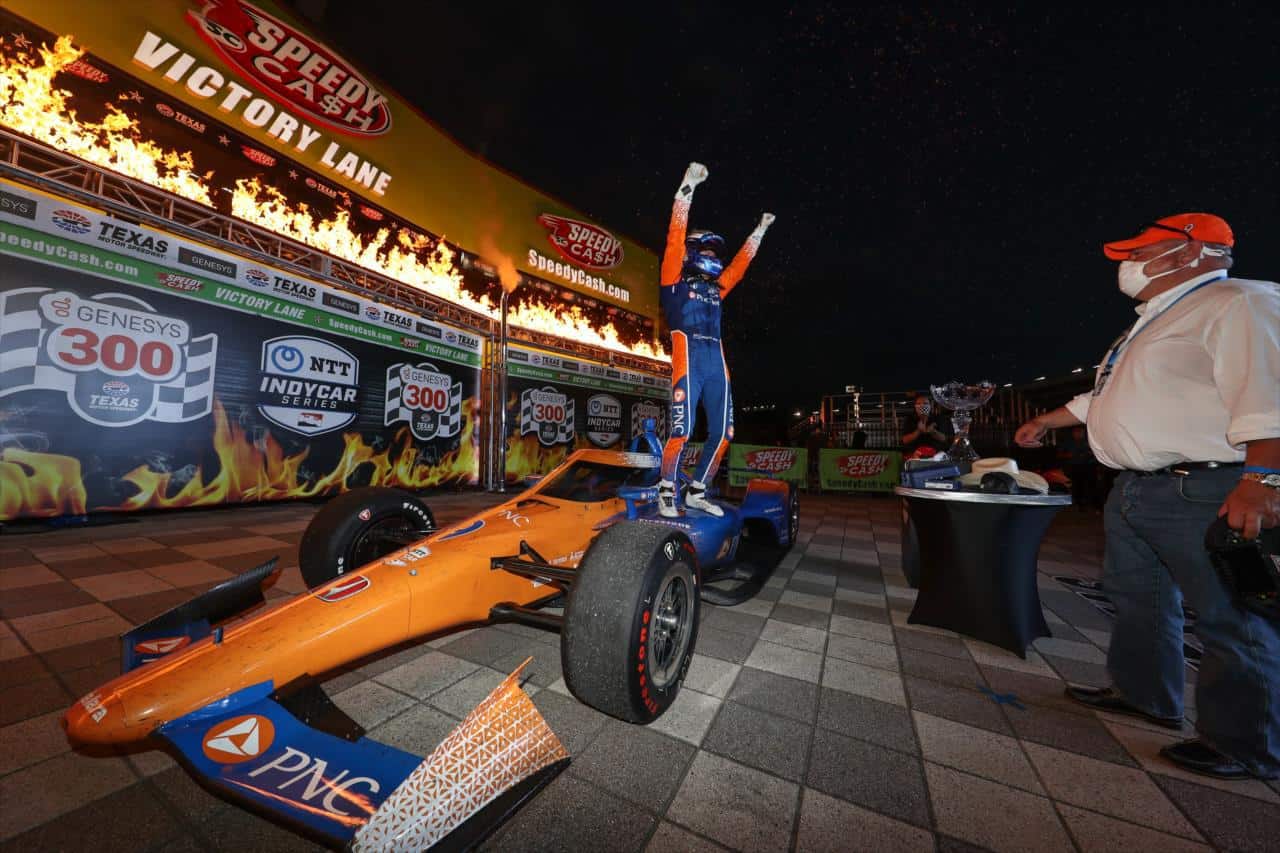 The NTT IndyCar Series had the first event of its pandemic-postponed season with the 2020 Genesys 300, and it was a difficult debut. Despite there being only one viable racing lane and two yellow flags, No. 9 Chip Ganassi driver Scott Dixon dominated the race and secured an easy victory—his second in three years at Texas Motor Speedway.

The race drama began before the green flag waved, with the Andretti Autosport cars of Alexander Rossi and Ryan Hunter-Reay suffering from unexplained problems on the starting grid while Graham Rahal lingered on pit lane with ECU issues. Hunter-Reay and Rossi were each issued a mandatory drive-through penalty for implementing repairs on the grid, while Rahal’s teammate Takuma Sato didn’t even get there. A wreck during qualifying kept Sato’s car in the garage too long for him to make the start.

Team Penske’s No. 1 driver Josef Newgarden qualified on pole for the start of the event and led the field easily through the first 25 laps until he caught lapped traffic. But two laps prior to the mandatory 35-lap tire stint limit, Newgarden reported vibrations and opted to pit early in hopes of retaining his lead.

Dixon assumed the lead for those two laps, leading the rest of the grid into a packed pit lane and causing the first running order shakeups of the event. He maintained that lead coming out of the pits, and was out front for more than half of the race.

Rookies Rinus Veekay and Alex Palou brought out the first yellow flag of the 2020 Genesys 300. Veekay grazed the wall and collected Palou, who had dipped to the bottom of the track in an attempt to avoid him. It was a tough learning curve for two drivers who had been thrown into the thick of IndyCar competition at one of the most brutal circuits on the grid.

A rough day for @RinusVeekay ends with a spin, and @AlexPalou had nowhere to go as Veekay gets into the back of him.

After the nine-lap caution Newgarden led the race while Dixon and his Chip Ganassi Racing teammate Felix Rosenqvist duked it out for second—a battle that Dixon ultimately won. The New Zealander’s speed was unmatched, and within three laps, he had passed Newgarden for the lead. Rosenqvist lingered in Newgarden’s wake, failing to get around the Penske driver until lap 119.

.@ScottDixon9 shows why he's one of @IndyCar's GOATs!

Check out this pass for the lead around the outside! #BackOnTrack // #Genesys300 pic.twitter.com/U6S6EwY3Wl

By that point, Newgarden’s pace in the 2020 Genesys 300 had slipped. He pitted early, signaling the train of cars behind him to follow Rosenqvist’s lead. The defending IndyCar champion returned to the track in fourth, his teammate Pagenaud taking his third position. He then fell victim to passes by Charlie Kimball and Zach Veach.

A fourth round of pit stops started on lap 153, with drivers slowly filtering in. Santino Ferrucci, who had been running solidly mid-pack all race, attempted to pull out of his pit box without a right rear tire, which sent him to the back of the field. Ferrucci promptly returned to pit lane with damage and retired early.

Lapped traffic proved to be a thorn in Dixon’s side in the last 30 laps of the 2020 Genesys 300. He struggled to pass Rossi, then Marco Andretti, which allowed Rosenqvist to keep the Kiwi in his sights. Dixon stayed out longer before the final round of pit stops in an attempt to ward off any potential problems caused by a caution, and when both drivers encountered traffic, Rosenqvist became the caution.

Trying to pass James Hinchcliffe on the high line, the No. 10 crashed into the wall with ten laps to go. It ended a very promising run for the Swedish driver and brought out the third yellow flag of the night.

The race resumed with three laps remaining, and with nothing but clean air in front of him, Dixon assumed a commanding lead. He claimed the first win of the 2020 IndyCar season at the 2020 Genesys 300 and his third victory at Texas overall.

While Dixon dominated, several other drivers showed promise on Saturday. Conor Daly, racing the No. 59 Carlin car during oval events, proved to be one of the biggest movers of the race. Starting 19th, Daly brought the car home in sixth to start his first full-time season since 2018, split between Carlin and Ed Carpenter Racing.

Veach also had an impressive showing after a demoralizing 2019 and two straight years of crashing into turn 2 at Texas Motor Speedway. He started fifth and finished fifth, making him the top Andretti Autosport performer of the evening.

Rookie Oliver Askew, racing for the newly formed Arrow McLaren SP, improved 11 positions from his starting spot of 20th. 2020 looks to be a promising—albeit shortened—year for the young talent of the NTT IndyCar Series, but it was the five-time IndyCar champion Scott Dixon who ruled the evening.

The 2020 IndyCar season continues with the GMR Grand Prix on Saturday, July 4 at Indianapolis Motor Speedway. The race airs at 12:15 p.m. ET on NBC.