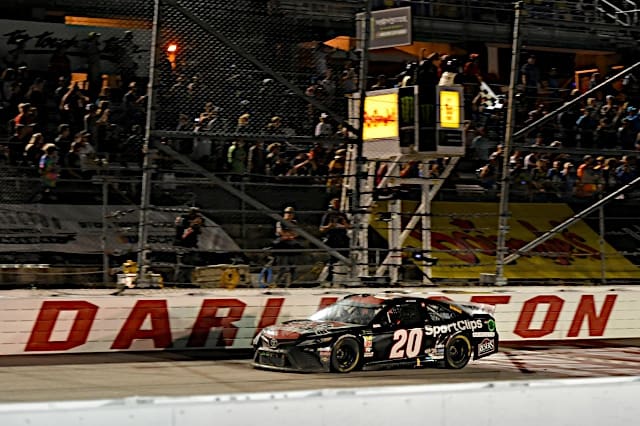 After over two months of inaction, NASCAR is finally back in action.

The race on Sunday will be a very interesting event. With no practice or qualifying time, the first laps back on a racetrack for the vast majority of drivers in the field will be the pace laps before a 400 mile slugfest at Darlington Raceway.

Darlington is one of the toughest ovals in all of NASCAR. Built in 1950, the track’s layout was largely designed for cars to go about 140 on it. William Byron’s pole speed for last fall’s Southern 500, in comparison, was 1

Originally, the racetrack was planned to be a more traditional oval with equal corners. What happened, however, is that the property owner did not want to disturb his minnow pond, so the track has an egg shape, creating a track where all four corners are completely unique. The pond still sits next to turn four to this day.

This race has a lot of unknowns going for it. Two drivers that may be very tempting to select in fantasy this week are Matt Kenseth and Ryan Newman. The smart thing to do for both is to ignore them; Newman is coming back from a major head injury while Kenseth hasn’t been in a Cup car since the end of 2018. In a race full of question marks, those two are the biggest of them all.

The field was set via random qualifying draws on NASCAR RaceHub on Thursday night; the starting lineup may be found here. There will be a rather unique competition caution on lap 30. On this caution, the field will be completely frozen for their mandatory pit stops as long as they don’t get lapped by the pace car.

To better explain how this works, say lap 30 happens and Kyle Busch is third in the race. Busch then takes a 30 second pit stop and is the 30th driver off of pit road. Assuming he beats the pace car driver, which he would with a 30 second pit stop, he will be able to restart the race in third. This is more of a make-up to teams due to the lack of practice time this weekend and the long layoff since the last Cup races in early March.

Also, with only 0.1 points awarded for each lap led by a driver, the need for a dominator is less important when building a winning lineup. The 293-lap race will have a total of 29 points up for grabs in this category. Take note when building your roster and focus on mid-pack competitors who can climb up toward the front on race day.

Harvick’s stat line isn’t that impressive at The Lady In Black. But the current series points leader has a great recent history at this tough intermediate oval.

Since 2013, Harvick has finished out of the top 5 just once, a ninth in 2016. That’s a six-to-seven ratio. Harvick also won in 2014 in that time frame. Harvick is the most expensive driver in the field, but he’s well worth the price. As one of the most experienced drivers in the field as well, Harvick will be smart enough to stay out of trouble until he gets his bearings under him again.

There are two things Truex has going for him in this race: stamina and consistency.

Truex has been amazing when it comes to hard endurance races. In addition to winning the 2016 Southern 500, Truex has also won two Coca-Cola 600s and a few races at Dover International Speedway, another track that is really tough on drivers.

This endurance is usually an advantage anyway, but it’ll be crucial over these next couple of weeks, with so many drivers out of racing shape after a couple of months off and so many races in so little time.

The other big advantage Truex has is consistency. In addition to his great average finish at Darlington, Truex has also completed all but five laps there. That’s a crazy stat at any racetrack, but especially one with so little margin of error.

Denny Hamlin has the much better Darlington record and is arguably a better pick than his teammate. But Truex will be starting further back in the field, which should give him a nice position differential bonus, and Hamlin just can’t match Truex when it comes to stamina or endurance. Hamlin is also much more expensive than Truex, and choosing Truex will give you more depth in the next tier, which is where the money is truly made in FanDuel.

Obviously, Jones has not had a long career at Darlington, but man, when he’s been there, he’s been quick every single time.

I don’t know why exactly FanDuel is offering the most recent winner at this track at this price, but he’s an absolute steal at it.

There’s really not much else to put here? That average finish speaks for itself.

I’m looking for a team that is going to walk out of Darlington with five decent finishes. While Buescher has never had a top 10 finish there, he has completed all but one lap and has never finished worse than 17th on the South Carolina oval. Buescher also drew last in his pool, starting the race in 24th- a great opportunity to get some extra differential points with a solid top 20 finish.

Bell is admittedly a pretty big gamble. After a rough start to the season, Bell is 32nd in points and is entering just the fifth Cup race of his career, on a track he failed to win at in the NASCAR Xfinity Series.

What’s different this time is just how great Toyota as a whole is at Darlington. With Leavine Family Racing’s technical alliance with Joe Gibbs Racing, Bell will probably be able to do a lot of learning off of four of the best drivers at Darlington. Jones’ success in his first three starts at the grandfather of all superspeedways shows that it’s not impossible for a young driver to find early success at Darlington. As long as Bell can avoid trouble in the back of the field in the early portions of the race, he should be able to come back with a lot of bang for his price.