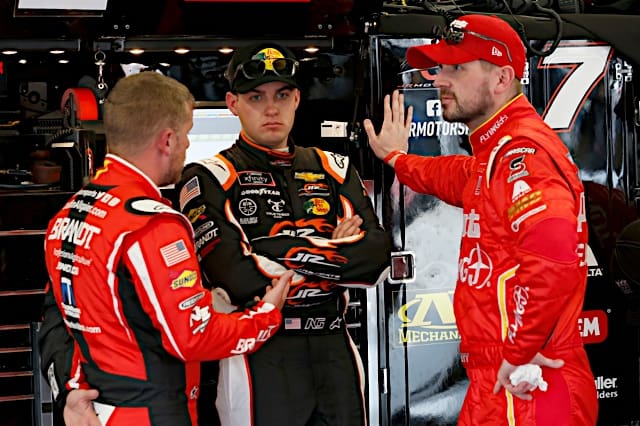 With no cash flow entering race shops for nearly six weeks due to the coronavirus pandemic, it’s been a challenging time for many teams in NASCAR. JR Motorsports is no exception, but the Xfinity Series’ biggest team is said to be in a good place.

Unlike many Xfinity teams, JRM hasn’t had to furlough or lay off any of its 88 employees. The Human Resource department has been in constant communication with said employees on a regular basis, checking to see if each of the workers is in a good spot financially.

When it comes to how the team will be affected as a whole, Kelly Earnhardt Miller, co-owner, vice president and business manager of JRM, believes it will take an extended period of time to see what the hiatus will do to the team.

“I don’t really think that we know the true extent of it yet,” Earnhardt Miller said. “With the unknowns of when we’re going back racing and if we’ll get a full schedule in and whatnot, the effects on what’s going to happen, we’re really not going to see those until probably year-end, depending on the number of races we get in or the schedule we get in based on how our contracts are constructed and things like that.”

From a financial standpoint, most Xfinity teams aspire to be in the position JRM is. With corporate sponsors such as BRANDT, Pilot Flying J, Hellman’s, among others, it allows the team to be successful on the racetrack with the necessary funding.

During a pandemic, it’s important to have that additional financial backing, along with how the team has gone about running its business over the past number of years.

“We’re in pretty good shape,” Earnhardt Miller said of JRM’s financial status. “We have been – over the past many years – frugal and cost-conscious about what we do and how we operate our team, which I think has put us in a good position to weather some of the storm.

“It’s really just the test of time to see how long [the hiatus] lasts. I think if we can get the schedule in, get the majority of the races in, we can get through this year pretty good, especially, too, because I think there will be cost-savings on the other end of it as well on how we race.”

She added the company has been granted money via Small Business Administrations loans and other “stimulus opportunities.” She believes the SBA money will take the team through the end of May, and by then hopes to be back racing.

But like other race teams, the longer the racing schedule is stopped, the worse off the company is. And with no timetable of a return date, JRM management is making sure the team is ready to go upon arrival to the Mooreseville, N.C. race shop, because once the season returns, it will be non-stop through the end of the season, whenever that is.

“We told our employees each and every week to enjoy the family time, it’s something they don’t get a lot of,” she said. “Get the honey-do projects done around the house, spend as much time as you can knocking some of those things out because when we do get back racing it will be very tough.

“I believe everyone is setting themselves up for it. When you know things like that, it’s easier to set your expectations and get through them to when you don’t. I think we’ll be fully prepared. I think it will be rough.

“But NASCAR, I believe, is going to also try to do what they can to make the race days and however we go to race – not easy, but they’re going to help us in that regard as it relates to how it goes about racing.”

When it comes to the series as a whole, more than 36 cars have attempted to qualify in two of four races this season. With many teams experiencing financial woes and having to lay off or furlough employees, Earnhardt Miller is slightly concerned big picture-wise, as well as setting up the future of JRM.

“We don’t have a lot of heavy players, a lot of small teams, and who knows if we’ll have 20 teams that show back up or 36?” she said. “…One thing just in thinking through, we’re not only worried about what 2020 looks like, but preparing for 2021 and the conversations that you would typically have over the summer, and from now through the summer of renewals and working on your plans for 2021, nobody’s really ready to have those conversations when we can’t get started on our season for this year.”

Over the past month, JRM partners have been able to get some additional exposure via iRacing. Whether it be co-owner Dale Earnhardt Jr. running sponsors Filter Time (co-owner with former NASCAR driver Blake Koch), TMC or supporting Walmart’s Fight Hunger, Spark Change campaign with Hellman’s, like he will this weekend at virtual Talladega Superspedway; or Justin Allgaier, Jeb Burton, Michael Annett and Noah Gragson running their respective sponsors, it’s allowed their respective brands to be seen to a large audience.

“It does offer some opportunity and value,” Earnhardt Miller said. “Our sponsors have been very patient. Everyone is understanding. They’re all going through different situations with their businesses. We don’t have any real big concerns, it’s just a matter of what the schedule is going to look like when we get back racing.”

From a competition standpoint, Gragson picked up the first victory of his young Xfinity career in the season opening race at Daytona International Speedway in mid-February. Allgaier has led 140 laps and has three stage wins to his name, but a disappointing 15.8 average finish. Annett has one top-10 result, sitting 10th in the championship standings, while Burton led the most laps (26) at Daytona. Unfortunately for Daniel Hemric, who is slated for 21 races in the No. 8 car, he hasn’t been able to get out of the gates, with two DNFs in three starts, resulting in a 24th-place average finish.

Earnhardt Miller knows the team needs to step up its performance once the season resumes.

“We want to do better,” she added. “I don’t think we’ve ran how we’ve wanted to run and I think we felt like we would be a little bit stronger this year but that hasn’t come to fruition.”

One of the internal positives that has come from COVID-19 is the JRM engineers and crew chiefs have had an opportunity to hone in on their skill sets, preparing for the season to come.

From a personal standpoint, Earnhardt Miller is more concerned for the health of others and the economy moving forward, knowing the pandemic is bigger than just one person, one team.

“The health risk of the virus is super scary,” she added. “The economic fallout for this – for what I believe is going to be months to years to come, to me – is going to be even greater than the health risk. I’m extremely concerned about society in general, small businesses, businesses, people, hardships, child abuse, mental health, suicide rates, you name it. I think there’s going to be a lot to fallout from what we’ve been through.”