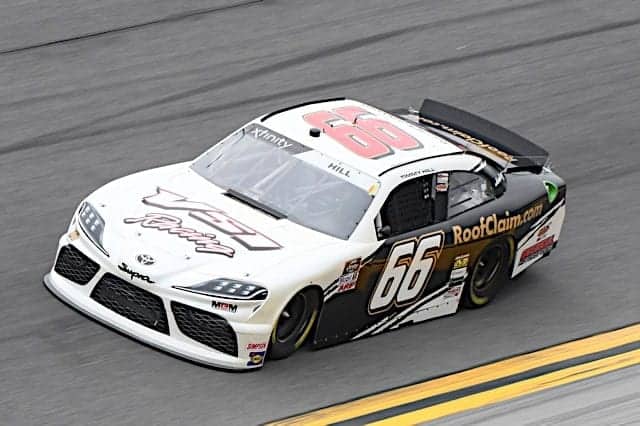 Timmy Hill’s week at Daytona International Speedway started off on a high note when he raced his way into the Daytona 500 in Thursday night’s (Feb. 13) BlueGreen Vacations Duel. But before he got to the premier race of the weekend, Hill first had the Xfinity Series on his plate.

After last night’s excitement in making Sunday’s Daytona 500, we focus our attention to our @NASCAR_Xfinity program. Practice went really well today! We have familiar colors as our cup car with VSI Racing & @RoofClaimUS onboard! Feels great to have 2 fast cars this weekend! pic.twitter.com/7mfhxZIWhU

It wasn’t all easy for the No. 66 team, though, as NASCAR found a violation in the nose of the car that ultimately resulted in a large penalty assessed Saturday morning (Feb. 15). The car was found in violation of Section 20.4; Flange Fit Composite Body (Flange Fit Composite Body must be used as supplied from the manufacturer without modification.)

As a result of the penalty, crew chief Sebastian Laforge was suspended for six races and fined $50,000. Additionally, the team was fined 75 owner points, putting them in a hole for the season ever began.

“NASCAR announced our fine this morning. It’s a tremendous hit,” Hill explained. “That fine is going to cost us severely money-wise. 75 points is probably going to keep us in the negative points for at least three or four races, so we’re going to have to qualify for a lot of these races.”

But Hill bounced back from that penalty in a big way with a career-best third-place finish in Saturday’s NASCAR Racing Experience 300. He restarted sixth with three laps remaining and charged toward the front, only to be stopped by the caution flying on the white flag lap, though he still emerged with the best result he’s posted in his NASCAR career.

“It was great for us,” Hill said, grinning ear to ear. “I just feel like this year is kicking off on a great note. Making the Daytona 500 on Thursday was awesome. I didn’t think it could get any better.

“I thought we could have had a shot at the win. We had a plan in place with Harrison Burton there. We just came up short on laps, but that’s OK. Really proud of this team, this effort. Man, it really feels good.”

The violation, though not intentional according to Carl Long, puts the small team in a hole to open the year. Following the third-place finish that was worth just 34 points, The No. 66 still sits at -41 points on the season.

Talked to Carl Long. He said sponsor of 66 Xfinity car liked it to be painted. He sent nose to be painted and body shop buffed it out and put bondo in spot and he did not realize it had bondo in it. No intent to cheat. Won’t appeal penalty but not happy. #nascar @NASCARONFOX

“It’s going to make it tough on us for the next few weeks, but a third-place finish will help us a little purse-wise, help pay that money back. That blow this morning was a hurt but this is a nice way to bounce back from that.”

For a small team like MBM Racing, a run like Hill had Saturday afternoon brings the right kind of attention.

“It just propels everything, kicks everything off on a good note. We have brand new sponsors here in roofclaim.com,” Hill explained. “They’re gonna join us for six or seven races this year. A finish like this really adds confidence to our race team to have them come on for more races and really help us funding-wise.

“We put together more of an effort here at the speedways than we normally do. It obviously shows every time we come to Daytona and Talladega. Hopefully, we can put together bigger efforts at more tracks.”

For Hill, it’s a sort of redemption for all of the bad days he’s had throughout his career.

“Those of you who know, my career has had a lot of bad days, a lot of 35th- and 40th-place finishes and it’s very tough,” he said. “I hear a lot from fans about how bad I am. Hopefully, days like this will show how good I am. Days like this certainly make it so much more special, and I hope I can show more people that we can do this on a regular basis.

“We really ended the year strong last year. I finish fifth in my truck, seventh in the Xfinity car at Bristol. To kick the season off with a third and making the Daytona 500, I’m on a career high right now. I just want to keep riding this wave, and I can’t wait to continue on.”

Looking ahead to Sunday’s Daytona 500, Hill is confident in the car he’s got to race.

“Tomorrow, we got another special car. We have a Ford with Roush-Yates power,” he said, his voice filled with confidence. “Those guys provided me a wonderful engine for this race. Tomorrow, I look to run in the main pack all day long and position myself for another great finish.