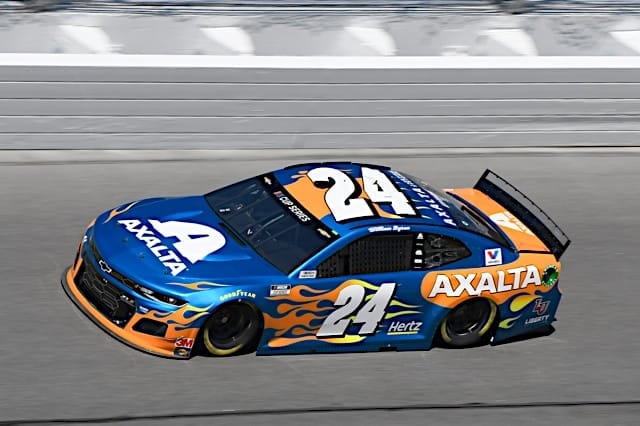 After nearly 30 laps of drafting together in a five-car pack, Denny Hamlin and the Toyota camp pulled off track, their cars ranked 1-5 on the speed charts. They held those spots until the closing minutes of Friday’s (Feb. 14) Daytona 500 practice, when the second Chevrolet draft pack of the session put seven Chevrolets at the top of the board, led by last night’s Duel 2 winner William Byron.

The Chevrolets were by far the most aggressive of the manufacturers to participate in Friday’s NASCAR Cup Series practice, with both of their drafting sessions that bookended the practice featuring three-wide racing and near-misses; Byron and teammate Jimmie Johnson came within inches of colliding near the front of the pack on the turn 2 exit at one point. Polesitter Ricky Stenhouse Jr. was actively involved in drafting, doing nothing to protect his pole-winning car.

Both Ford and Toyota also had their teams draft during practice, though they limited their sessions to single-file drafting. The Toyotas ran by themselves for the entirety of their time on the track. In the Ford camp, both Ryan Blaney and Corey LaJoie got their backup cars onto the track for practice following wrecks in the Duels Thursday night (Feb. 13).

There were two developments of note regarding the Fords during practice. Drafting about midway through practice, Joey Logano expressed frustration with Michael McDowell, who was leading the Ford pack. Logano was unhappy that McDowell’s Mustang would not stick to the yellow line through the corners. Logano ended last year’s 500 furious with McDowell over his decision not to draft with the No. 22 in the closing laps; McDowell said Logano had hung him out to dry over the course of that race.

Brad Keselowski was not involved in any incidents, but did not show well in practice — at one point telling his team he was wide-open and unable to hang after losing the pack he was drafting in. Said David Ragan of an earlier drafting session, his car picked up speed once Keselowski’s No. 2 pulled out of their draft pack.

Eight cars opted not to practice, including Aric Almirola‘s No. 10 Ford, which pushed Logano to victory in the first Duel race Thursday. The practice ended about a minute early due to a red flag for rain.