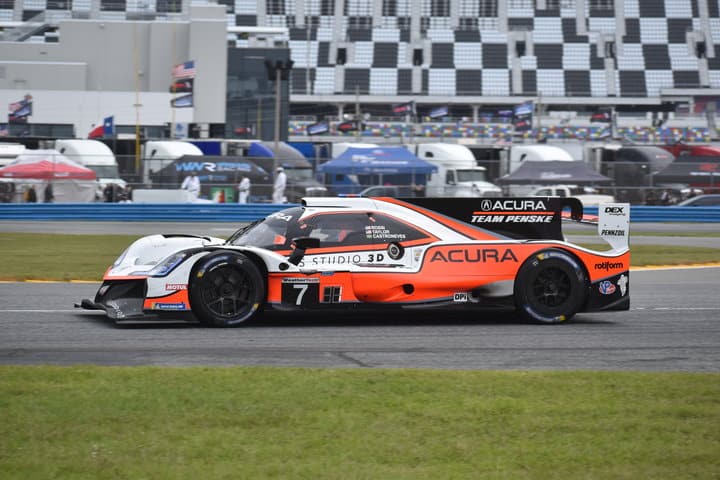 Weather has played a substantial role in practice Thursday (Jan. 23) for IMSA WeatherTech SportsCar Championship teams in Daytona.  Both sessions saw rain fall.  However, there was enough dry running in the second session to allow Acura Team Penske’s Ricky Taylor to set the quick time of the day at 135.042 mph.

The morning session for WeatherTech teams started under heavy cloud cover with rain falling.  As the session continued on, the rain all but stopped and the sun came out.  By the time the session ended, the track had dried substantially, but it was not dry enough for slick tires.

Acura Team Penske’s Juan Pablo Montoya‘s was fastest overall with a lap at 116.597 mph, roughly 15 seconds off the dry pace.  The lap was four-hundredths of a second faster than Mazda Team Joest’s Olivier Pla.  JDC-Miller MotorSports’ Tristan Vautier was third in his Cadillac, followed by teammate Sebastien Bourdais.  Taylor was fifth fastest.

Tower Motorsport by Starworks’ Nicolas Lapierre was fastest in LMP2 with a lap at 125.410 mph, good for eighth overall.  That lap was a second and a third faster than DragonSpeed’s Ben Hanley.  PR1 Mathiasen Motorsports’ Simon Trummer was third fastest.

Porsche GT Team continued to show the swell pace of their new Porsche 911 RSR-19s by taking the top two places in class in the first session.  Laurens Vanthoor was fastest in his No. 912 Porsche with a lap at 109.509 mph, nearly one-third of a second faster than teammate Nick Tandy.  Corvette Racing’s Antonio Garcia was third fastest in the new Chevrolet Corvette C8.R, while Marcel Faessler was fourth in the second Corvette.  BMW Team RLL’s Connor de Phillippi was fifth.

Unfortunately for Black Swan Racing, they did not escape the opening session unscathed.  36 minutes into the session, Trenton Estep crashed the Porsche in turn 1 after getting involved with Pla.

The @BlkSwnRcng Porsche had an incident in the opening practice session today. Here, you can see some of the damage. pic.twitter.com/rAf64TNPUA

As you can see, there is a fair amount of damage to the Porsche 911 GT3 R (note the broken wheel).  The team sat out the second practice session in order to repair the right front corner of the car.

The second practice session started out dry, allowing drivers to go out on slicks and go as fast as they could.  Early on, Mazda Team Joest’s Harry Tincknell was fastest.  However, Taylor took that away on his final lap of the session with the fastest lap of the day.

Shortly afterwards, the rains returned, saturating the track once again.  The session all but ended eight minutes early when a red flag was thrown for debris.  The session had two red flags for debris, but no one significantly damaged their cars.

Hanley was fastest in LMP2 with a lap at 130.282 mph, good for ninth overall.  His best lap was nearly a full second faster than Tower Motorsport by Starworks’ David Heinemeier Hansson.  PR1 Mathiasen Motorsports’ Gabriel Aubry was third, just ahead of Performance Tech Motorsports’ Kyle Masson.

Porsche GT Team continued to dominate in GT Le Mans.  Vanthoor was once again fastest, this time with a lap at 125.024 mph, good for 13th overall.  Vanthoor’s lap was nearly two-thirds of a second faster than Tandy, while Garcia was third.  Tommy Milner was fourth, while BMW Team RLL’s Jesse Krohn was fifth.

Turner Motorsport’s Robby Foley was fastest in GT Daytona with a lap at 120.996 mph in his BMW M6 GT3.  Foley’s lap was ultimately one-sixth of a second faster than PFAFF Motorsports’ Zacharie Robichon.  GRT Grasser Racing Team’s Franck Perera was third in his Lamborghini, beating out fellow Huracan driver Bryan Sellers.  Scuderia Corsa’s Toni Vilander was fifth in his Ferrari.

Trouble struck during the session for AVS Vasser Sullivan.  The No. 14 Lexus RCF GT3 suffered an apparent blown engine with Michael de Quesada at the wheel.  It appears unlikely that the team will be able to get a new twin-turbo V6 engine installed prior to qualifying.  Remember that this is the car that Kyle Busch will be driving.  If they are unable to set a time in qualifying, then they would have to start the race Saturday from the rear of the field.

Qualifying for the Rolex 24 at Daytona is scheduled to begin at 4:15 p.m. Thursday afternoon.  The session will air live on IMSA.com.