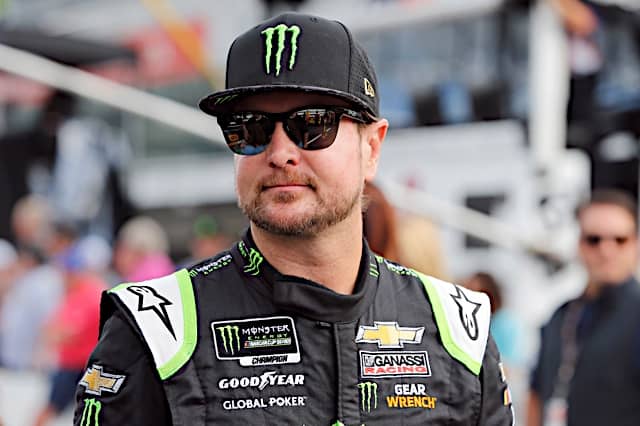 While Kurt Busch‘s decision to leave Stewart-Haas Racing for Chip Ganassi Racing in 2019 wasn’t exactly stunning, it did seem a little like his return to Chevrolet would be a downgrade.

But after the checkered flag flew at Homestead-Miami Speedway to close out the 2019 NASCAR Cup Series year, that turned out not to be the case. At all.

On the sponsorship side, he brought Monster Energy with him as a full primary for 21 races and another race as a co-sponsor, and then new partner Global Poker came along for an additional six events.

For much of the season, Busch was the top Chevrolet driver, though eventually his CGR teammate Kyle Larson and Hendrick Motorsports’ Chase Elliott took over that role.

His 19th season with his sixth team began on a less-than-perfect note in the Daytona 500, as he got caught up in a late wreck and finished 25th in his first race in the No. 1 Camaro.

But then came Atlanta and the West Coast Swing, during which he reeled off a third place at Atlanta Motor Speedway, a fifth at Las Vegas Motor Speedway, seventh at ISM Raceway and sixth at Auto Club Speedway.

Ahead of the spring race at his home racetrack of Las Vegas, Busch paid out of his own pocket for local company Star Nursery to be on the car, since it sponsored him in the NASCAR Southwest Series in 1998-99, where his championship-winning season caught the eye of Jack Roush and kickstarted his Cup trajectory.

This is as special as it gets… The Star Nursery Special racing again in @LVMotorSpeedway ? Thank you @StarNursery @CGRTeams pic.twitter.com/Crlspc8dRa

At the spring race at Martinsville Speedway, Busch’s hot streak cooled off a bit, but he still ran a very solid 12th, which was followed by a ninth in the first visit to Texas Motor Speedway. Then at Bristol he ran second to his little brother Kyle Busch after a spirited but clean battle for the win. But given their history of sibling rivalry, he had to throw in a little jab at the end of his classy post.

Congrats little bro @kylebusch. Thanks @teamchevy @MonsterEnergy we will keep building towards a win.. RT if you think I should have wrecked him pic.twitter.com/2K2asrZnOM

Richmond Raceway nearly saw another top 10 with a 11th-place run, and then the first event at Talladega Superspeedway saw Busch survive to earn sixth.

The first Dover race saw another top-15 run in 15th, followed by a seventh at Kansas Speedway.

The Coca-Cola 600 was the worst race of the year to that point, where the car didn’t quite work most of the day, finishing four laps down in 27th.

June was a bit of a dry spell, with an 11th at Pocono Raceway, runner-up finish at Michigan International Speedway and back-to-back 13ths at Sonoma Raceway and Chicagoland Speedway.

July didn’t start out much better; leading the rain-postponed Coke Zero Sugar 400 late at Daytona, he pulled down pit road when a thunderstorm started, which let the race win fall to Justin Haley when the race was called off a few hours later.

The next week at Kentucky Speedway, Busch’s resiliency showed through, as he led 41 laps (more than doubling his laps led total for the season) and punched his ticket for the playoffs with the win in the Quaker State 400, the first trip to victory lane for many members of his crew. Busch also held off his brother on a late restart and was sixth in the standings at this point, the highest he placed all season.

After that peak, it was time for a valley as another dry spell began, running 18th at New Hampshire Motor Speedway, a 27th in the return to Pocono, a very distant 10th at Watkins Glen International and 23rd in the second Michigan race.

The Bristol Night Race saw a ninth-place finish, and then in the Southern 500 at Darlington Raceway Busch ran seventh, both times starting fourth.

The playoffs opened horribly, as the regular season finale, the Brickyard 400, saw a season-low 30th-place finish, five laps down. Then in the playoff opener at Las Vegas, Busch crashed on lap 187, finishing a season-low last-place 39th. At the second Richmond race he ran an average 18th, and a needed miracle at the Charlotte ROVAL didn’t happen, running 20th.

While disappointed with being eliminated from the playoffs after the first round, Busch handled it well on Twitter.

It’s been a good racing season, but… these last three races were a friggin disaster. We still have seven races left to shore things up and prove we’re so much better than this recent stretch.

The second Dover race saw the No. 1 team rebound to a ninth-place run, but despite leading 16 laps at Talladega, Busch was caught up in a wreck to record a 28th-place result.

In the return race at Kansas he sprang back with a fourth-place run, followed by a sixth-place run at Martinsville in the Halloween event and a ninth at Texas to open November, which also saw him sign an extension with Ganassi.

The penultimate event at ISM nearly saw another top 10 with an 11th-place finish, and then in the season finale at Homestead-Miami Speedway a late flat tire ruined a decent day, as Busch finished 21st while his brother won the race and the championship.

RF tire with 2 laps to go! ? Had to pit… The #1 @MonsterEnergy @TeamChevy came a long way in 2019. Onward and upward in 2020! Congrats to @KyleBusch on his @NASCAR championship. I always said, “you think I’m good, just wait for my little brother.” Congrats2xChampion ?? pic.twitter.com/ri6z9QyfwG

But compared to Jamie McMurray in 2018, the No. 1 team improved by leaps and bounds, with Busch’s six top fives beating McMurray’s two, 18 top 10s as opposed to eight, leading 212 laps compared to nine, making the playoffs and finishing 13th after coming 20th in the standings the year before, and soundly thumping the average start (18.1) and finish (18.9) markers of 2018, while picking up three stage wins.