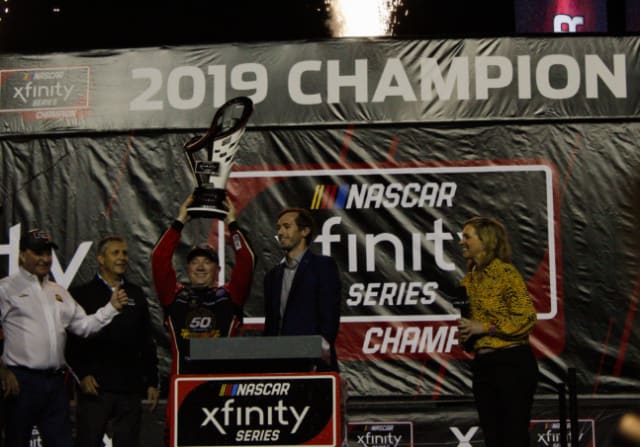 The 2019 NASCAR Xfinity Series title came down to the three drivers that have dominated its season: Tyler Reddick, Cole Custer and Christopher Bell. A trio that won 21 of 33 races this season ran 1-2-3 entering the closing laps of Saturday’s (Nov. 16) Ford 300.

In the end, it was a battle for who could run the top … and no one ran the top better than Reddick. The Richard Childress Racing driver passed Custer with 18 laps to go, then held on through some white-knuckle action to win the race and the 2019 NASCAR Xfinity Series championship. His clutch performance down the stretch clinched the first NXS title for Richard Childress Racing since Austin Dillon in 2013.

Dillon won his title in a winless season. Reddick? Far from it. His sixth victory put the cherry on top of a historic feat: becoming the first driver to win back-to-back NXS titles for different teams.

“This one means so much more,” Reddick said. “It was a lot better year and really cool to go back-to-back. It’s all about Richard [Childress], man. He’s the one that believed I could be a champion. I’m just really glad to keep true to his promise.”

To do it, Reddick and his No. 2 Chevrolet had to push to the front the hard way. He actually left pit road on his final green-flag stop in fourth out of the four title contenders. Running fresher tires, he and Custer made quick work of Bell and Justin Allgaier.

That left him and Custer, mano e mano, to battle for the win in the final 34 laps. There was only one lead change during that stretch but don’t be fooled by the numbers; the side-by-side competition was incredible. Both drivers pulled off slide jobs, scraped the wall and used every inch of the racetrack to stay up front.

“I wouldn’t say I had it planned out,” Reddick said of the final pass. “I made a lot of mistakes around Cole tonight and I knew he wasn’t happy about it. He was going to race me hard there.”

“He can rip the top here, that’s all I can say about it,” Custer said. “Sucks to come home second two years in a row but we’ll take it. We were a lot closer this year.”

After getting passed for good, Custer tried to hold on but eventually got in the fence. The final margin of victory was about a second, but Reddick was able to hold his edge those final few laps. As it was, Custer had staged a furious comeback, recovering from an unscheduled stop for a loose wheel that left him a lap down for most of stage two.

Those problems, combined with weaker short-run speed from Reddick, appeared to shift momentum Christopher Bell’s way. But the No. 20 Joe Gibbs Racing Toyota faded during a long green-flag run during the final stage. Then, a miscommunication caused Bell to miss pit road, costing him time and track position that ruined any chance he had left.

“What the heck was that? What happened?” asks the 20 team as Christopher Bell looked to be coming to pit road and then either missed it or aborted | #NASCAR

“I got told the keyword pit, and then I started pitting and he said not now, not now,” Bell said. “Got beat by 17 seconds but I’m glad that didn’t affect the outcome of the race. I don’t get it. For whatever reason, whenever the tires start falling off here, I struggle. I’m OK for 10, 20 [laps] and then after that, we just fall apart for some reason.”

Bell wound up fifth, falling behind Chase Briscoe and Noah Gragson by the finish. Briscoe’s third-place result, incredible considering he slammed the wall on lap 124, was good enough to earn NASCAR Xfinity Series Rookie of the Year.

Allgaier, the fourth NXS title contender, was never at the same level as the other three. He spent most of the night in the back half of the top 10 before a late-race mistake left him slapping the wall and making an unscheduled green-flag stop.

“I’m not sure they knew we were here,” Allgaier said. “We felt like the balance in certain points in the race was pretty decent and even when we were at our best, these guys were just driving away from us. It’s disappointing to not be running well and then to get in the fence there. Just a bummer of a night.”

Instead, it was Allgaier’s former teammate Reddick taking center stage. The championship helps validate a move to RCR despite what became a title-winning season at JR Motorsports a year ago.

“So blessed with this team,” said Reddick’s Crew Chief Randall Burnett, who earned his first NXS title on top of the box. “Everyone that’s on this car. It is unbelievable. Best team I’ve ever been a part of, amazing group of guys and amazing driver, too.”

John Hunter Nemechek ran sixth, followed by Austin Cindric, who led the most laps for him on an oval all season (40). Brandon Jones, Jeb Burton and Harrison Burton rounded out the top 10. Only eight drivers ended the race on the lead lap.

For the first time since 2013, Shepherd Racing Ventures had the funding to run the full race. @landoncassill finished 15th for the team, it’s best finish since Las Vegas, 2009.@m_massie22 talked to team owner Morgan Shepherd after pic.twitter.com/Q6LLAO0VYk

And Colin Garrett ran 21st in his debut with a new team, Sam Hunt Racing.

Not too shabby, huh?@DaveyCenter caught up with team owner @SamHunt22 (and a video bomb by @ColinGarrettWeb) following their rock solid debut. ?? pic.twitter.com/2IiIqTbY0o

The series now moves forward in 2020 without Reddick, Bell and Custer. All three will move up to compete for NASCAR Cup Series Rookie of the Year, a battle that’s sure to be just as competitive.

Reddick moves into arguably the worst equipment of the three. But races like today show the two-time NXS champion will be a force at the top level for years to come.

“This team, man,” he said. “I was a driver that would overdrive, make mistakes and not compete on racetracks like these. They made me a more well-rounded driver.”