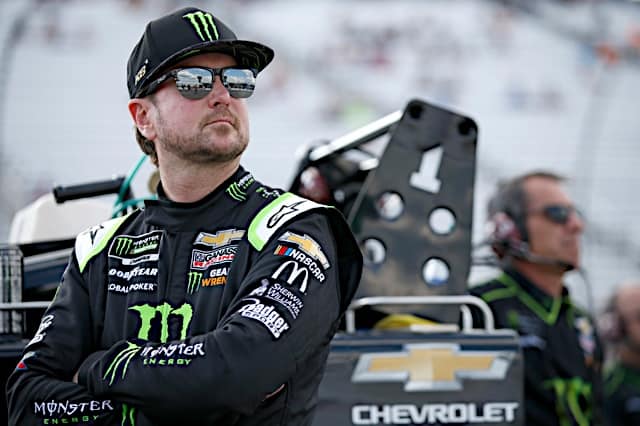 Sunday (Nov. 17) will mark the final race of the NASCAR season, the Ford EcoBoost 400 at Homestead-Miami Speedway. Four drivers will via for the 2019 Monster Energy NASCAR Cup Series championship when the race begins live on NBC at 3 p.m. ET.

When it comes to mile-and-a-half racetracks, the best one in the country may very well be the oval at Homestead. The original track, a flat oval that produced pretty boring racing, was paved over for a new, progressively-banked configuration in 2003. One of the oldest surfaces in NASCAR, Homestead resembles a wider Atlanta Motor Speedway prior to that track getting its current configuration in 1997. Coincidentally, that version of Atlanta was also the site of the season finale for many years.

Since the advent of the “one-race championship” playoff structure in 2014, every single driver to win at Homestead has been a title contender. As a result, the entirety of the Cup Series Championship 4 will be heavy favorites entering this weekend.

When picking a fantasy team this week, keep in mind it’s impossible to pick all four championship contenders in one game. And that’s OK; usually, at least one of them is out of serious contention for the race win by the end. The best method would be to pick two championship contenders, nab a lower-tier driver to offset the contender price, then round out the team with two solid mid-tier picks.

Also, with only 0.1 points awarded for each lap led by a driver, the need for a dominator is less important when building a winning lineup. The 500-lap race will have a total of 50.0 points up for grabs in this category. Take note when building your roster and focus on mid-pack competitors who can climb up toward the front on race day.

Here are a few drivers to keep an eye on for Sunday afternoon’s race.

Of the three Joe Gibbs Racing championship contenders, Hamlin is the only one with two wins at Homestead. He’s also earned a better average finish there than the other two.

To me, this spot came down to those three JGR drivers. Kyle Busch hasn’t had much success in the playoffs and also has a spotty record at Homestead (average finish: 17.4). Compare that to Hamlin, who has a lot of momentum heading into this weekend after winning Phoenix to get into the Championship 4. Meanwhile, Martin Truex Jr. has just one bad finish at Homestead too many (two DNFs) to justify picking him over Hamlin.

Finally, with qualifying being cancelled for the weekend, Hamlin will start on the pole this Sunday. It also means he will have the best pit stall of the four championship contenders; it’s those small advantages that can make a big difference in a close title race.

Harvick is the black sheep of this year’s Championship 4, the lone non-JGR driver to make it to Homestead with a shot at the title. But that is going to work to Harvick’s advantage, as the three JGR drivers aren’t going to have the absolute full support of a multi-car team, plus a manufacturer, behind them.

Busch doesn’t have amazing stats at Homestead. But he is a former winner, and probably the best bang-for-your-buck in this price range. In 10 mile-and-a-half races this season, Busch has seven top-10 finishes. That’s tied for the most of any other driver not competing for the series title.

With FanDuel’s model of rewarding consistent finishers over making home run, go-or-blow style picks, Busch makes a great middle man on any roster at this or really any other track type. Busch also has a win at a mile-and-a-half, the summer race at Kentucky Speedway, to his credit for this season. If his cards are played right, the No. 1 Chevrolet may even be a contender to spoil the win.

Ignore Bowman’s awful record at Homestead. Bowman is one of just four drivers this season to have an average finish in the single digits (9.3) at mile-and-a-half racetracks. Bowman won at Chicagoland Speedway, almost won Kansas Speedway and finished fifth at Texas Motor Speedway a few weeks ago.

I don’t understand why, exactly, Bowman is priced this low. Yes, he is an unknown at Homestead, but so is William Byron, valued this week at $10,000. Unless you really think Byron is going to win outright, Bowman is a much better (and cheaper) option this weekend.

Wallace really isn’t that great of a pick this weekend, but with the team I’m building, he’s the best pick possible for this final slot. He is slowly becoming a “primetime” driver, finishing second in the Daytona 500 last year and third in the Brickyard 400 this year. Wallace may just break out this weekend and have another surprise run when the lights are at their brightest.

Even if not, the Richard Petty Motorsports driver should still be a solid pick to survive and maybe nab a top 20 out of the weekend. Wallace has had at least some success at mile-and-a-half racetracks this season, winning a stage in the All-Star Open back in May at Charlotte Motor Speedway. That is arguably a bigger accomplishment than just about any other driver around his price tag.