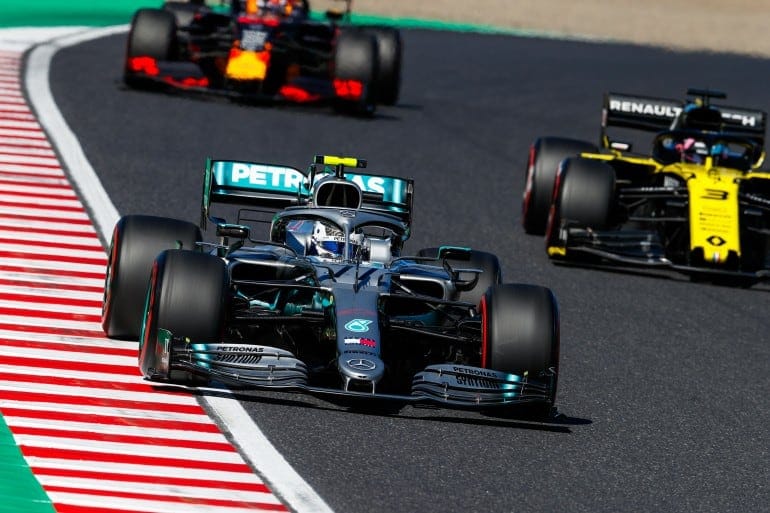 While the focus of the weekend will be on Lewis Hamilton as he seeks his sixth drivers title, he failed to keep the spotlight on Saturday (Nov. 2) during qualifying at the Circuit of the Americas outside of Austin, Texas. Though Hamilton had taken the pole in the last three races at the track, his Mercedes teammate Valtteri Bottas took the top position.

With a blistering lap set prior to drivers returning to the garage for the last-gasp attempts at stealing the pole, Bottas looked to have set an excellent time but one that the Ferraris would likely eclipse. Instead, Sebastian Vettel put down a lap .02 seconds off what Bottas had laid down. Max Verstappen, a favorite for the pole, fell .07 behind.

The second Ferrari of Charles Leclerc wound up nearly a full 0.1 seconds from the top with Hamilton clocking in at a surprisingly slow fifth. Alexander Albon had an up and down qualifying, appearing to be blisteringly fast in some sections of the track while missing the mark at other parts and settled into sixth.

The McLarens found their frequent position in the midfield behind the big three as Carlos Sainz will start seventh with Lando Norris alongside in eighth. Daniel Ricciardo, who must be eager for this disastrous season to end, slots in at ninth after a solid qualifying effort. Pierre Gasly rounded out the top 10 in his Toro Rosso.

Full Results can be found here.

– The track became a topic of conversation this weekend in an unusual way. It seems that the land on which COTA was built has shifted a little bit over time. These undulations in the ground have caused a few bumps to become part of the racing surface and making it a bit more than typically challenging.

After Friday’s practices, Hamilton indicated that the bumps had caused a headache and appeared to complain about the surface. Other drivers have come out in support of the surface, finding it to be an intriguing test but nothing to be too worked up about.

Criticisms about tracks are nothing new in any form of racing. Drivers always want the track to make life easy on them, it seems, but that belies part of the whole point of racing, which is to do something difficult in a car that most of the populace cannot or will not do. Of all the tone-deaf things that drivers say, this type of complaint seems to be one of the worst.

– Hamilton will win his sixth title as long as he finishes eighth or better. Barring an engine fatality, it will be time to give him the trophy on Sunday.

– Sergio Perez will start the race from the pit lane. The reason is not that Perez wrecked during qualifying and the car is troubled, nor is it for any kind of incident during qualifying where he drove someone into the wall. Instead, the reason for his unfortunate starting position is because he missed the scale during FP2.

The offense is one where the stewards have no ability to offer an alternate punishment. Perez may have been able to avoid a substantial penalty after missing the scale for weighing if he had not gone to his team’s garage and the car getting worked on.

It is the issue of the ability of the team to tinker with the car and escape being weighed that is the biggest aspect and the reason that the penalty is so stiff. Perez enjoyed an excellent weekend in Mexico but is off to a frustrating one in Texas as even if his qualifying time had stood he would have been in 19th.