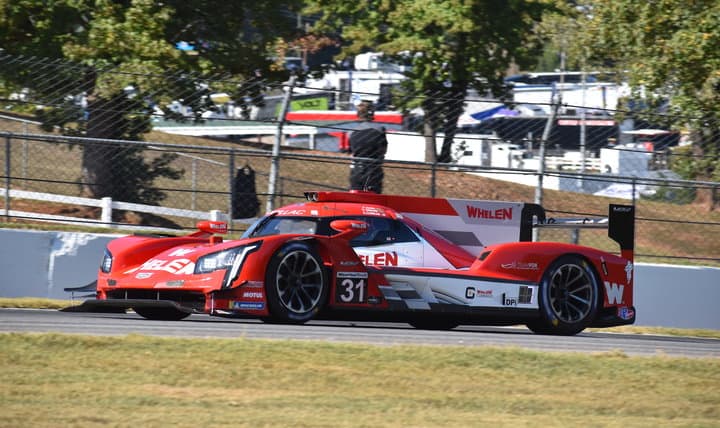 Action Express Racing’s Felipe Nasr was fastest overall in IMSA WeatherTech SportsCar Championship practice Thursday (Oct. 10) at Michelin Raceway Road Atlanta with a lap at 132.343 mph.  The lap was turned in during the opening practice session of the day and was more than a second faster than the overall pole time from last year.

GT Daytona saw Turner Motorsport’s Bill Auberlen fastest in his BMW M6 GT3 with a lap at 115.300 mph.  The lap was nearly three-tenths of a second faster than AVS Vasser Sullivan’s Jack Hawksworth.  That quick lap came despite Hawksworth drawing the first red flag of the day when he stopped on-course a few minutes into the session.

Paul Miller Racing’s Bryan Sellers was third quickest in his Lamborghini, but like AVS Vasser Sullivan earlier, the Paul Miller team found trouble as well.  Teammate Marco Seefried spun the No. 48 Huracan GT3 in turn 3 and damaged the Lamborghini slightly.  That brought the second red flag of the session.  Seefried was ok, but the team skipped Practice No. 2 in order to repair the 1st Phorm Lamborghini.

Montaplast by Land-Motorsport’s Christopher Mies was fourth quickest in the sole Audi R8 LMS GT3 in the field.  Riley Motorsports’ Jeroen Bleekemolen was fifth in his Mercedes.

In the afternoon session, speeds were nearly identical to those turned in during Practice No. 1.  Cameron was fastest in his Acura ARX-05 with a lap at 132.340 mph, a lap just two-thousandths of a second slower than Nasr in the earlier session.

Cameron’s lap was a quarter of a second faster than JDC-Miller MotorSports’ Tristan Vautier in his Cadillac.  2019 has been a tough season for JDC-Miller MotorSports and the good pace shown here was something for the team to hang their hats on.  It didn’t exactly last.  Later on in the session, Juan Piedrahita spun off at turn 6 at the far end of the course.  He was able to continue, but not before  a red flag was thrown.

GT Daytona was topped by Riley Motorsports’ Felipe Fraga with a lap at 115.345 mph in his Mercedes.  Fraga’s lap was four-tenths of a second faster than Mies.  Scuderia Corsa’s Toni Vilander was third in his Ferrari, followed by Turner Motorsport’s Robby Foley.  Meyer Shank Racing with Curb-Agajanian’s Justin Marks was fifth in his Acura.

There were no less than six on-track incidents during the 75-minute session.  Four of those incidents resulted in stoppages.  The Piedrahita incident was the last of the four.  Prior to that, Chris Miller spun the No. 84 Cadillac and got stuck in the gravel at the chicane.

15 minutes later, Marks spun and got himself stuck in the trap as well.  Motorsports Tribune’s Christopher DeHarde saw the replay and quipped, “Justin missed his Marks.”

After spins for Performance Tech Motorsports’ Andrew Evans and Turner Motorsport’s Dillon Machavern, Mazda Team Joest’s Tristan Nunez spun in the chicane and got himself stuck there.  That led to the third red flag of the session.

Night practice often leads to higher speeds, but that wasn’t really the case Thursday.  Action Express Racing’s Pipo Derani was fastest overall with a lap at 131.654 mph, the second session in which Action Express’ No. 31 was fastest.

Derani’s lap was two-tenths of a second than Albuquerque.  Taylor was third fastest, then Vautier and Mazda Team Joest’s Oliver Jarvis.  Aubry was once again fastest in LMP2 with a lap at 127.551 mph.  That lap was four-hundredths of a second faster than Masson.

Unlike the somewhat wild second practice session, there was only one red flag during the night session.  That came when Rene Binder spun the Juncos Racing Cadillac DPi-V.R. and got stuck in the gravel.  The red was thrown to pull him out.

In GT Le Mans, Mueller was fastest with a lap at 119.448 mph, the fastest GTLM lap of the day.  That lap was nearly a quarter of a second faster than BMW Team RLL’s Tom Blomqvist.  Ford Chip Ganassi Racing IMSA’s Ryan Briscoe was third while Corvette Racing’s Mike Rockenfeller was fourth.  Risi Competizione’s Alessandro Pier Guidi was fifth.

Auberlen was once again fastest in GT Daytona with a lap at 115.293 mph.  That lap was six-hundredths of a second faster than Bleekemolen.  Magnus Racing’s Spencer Pumpelly was third in his Lamborghini with Sellers close behind in his repaired Huracan.  Mies was fifth quickest.

IMSA WeatherTech SportsCar Championship teams have one more practice session on Friday.  That session is scheduled to start at 11:15 a.m. EDT and will run for 60 minutes.