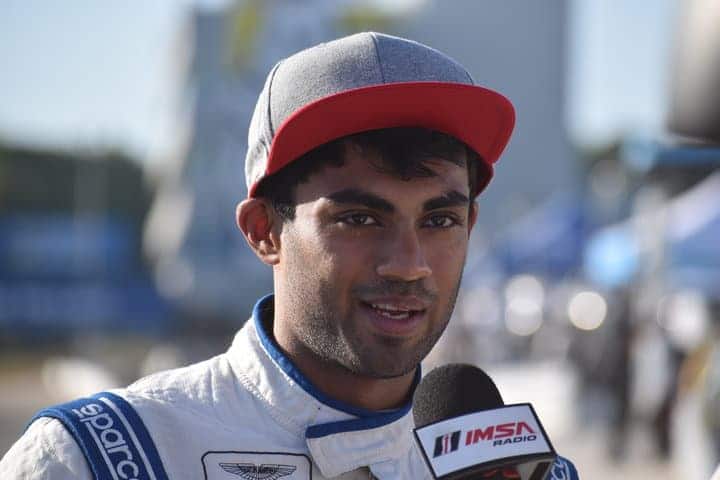 Automatic Racing’s Akhil Rabindra, in only his fourth IMSA Michelin Pilot Challenge start, claimed the pole Thursday (Oct. 10) for Friday’s FOX Factory 120 at Michelin Raceway Road Atlanta with a lap at 106.679 mph.  It is his first career IMSA pole and a new track record.

“[My car] was wonderful,” Rabindra told Frontstretch after the session.  “We got a really good setup and I think the weather has been changing [to our favor].  That plays a lot with the tires and setup.  I have a great team behind me that nailed the setup and a teammate in Tom Long who brings a wealth of experience.  I’m very happy with the result.”

Ultimately, it did not take long for Rabindra to set the pole-winning time.  He put up the pole lap on his first flying lap.  After being unable to improve on his second lap, he chose to bring it into the pits only six minutes into the session and watch everyone else try unsuccessfully to beat his time.

Rabindra’s pole lap was one-tenth of a second faster than Multimatic Motorsports’ Sebastian Priaulx.  TeamTGM’s Owen Trinkler will start third in his Mercedes, followed by the McLaren of Motorsports In Action’s Corey Fergus.  Kyle Marcelli, who was fastest in Practice No. 2, will start fifth.

CarBahn Motorsports’ Jeff Westphal qualified sixth in a car that turned absolutely no laps prior to the pre-qualifying warm-up.  When asked about the team’s strategy, Westphal’s teammate Tyler McQuarrie indicated to Frontstretch that the team is all but guaranteed the Grand Sport championship by starting the race Friday.  They didn’t want to put extra miles on the car and risk something happening.

In TCR, JDC-Miller MotorSports’ Britt Casey Jr. put down the fastest TCR lap of the weekend at 104.115 mph to win the class pole in his Audi.  Casey’s lap was good enough for 17th overall.

Casey ended up nine-hundredths of a second ahead of the Hyundai of Bryan Herta Autosport’s Mark Wilkins.  LA Honda World Racing’s Shelby Blackstock will start third in class in his Honda Civic Type-R TCR, followed by Michael Johnson in the second JDC-Miller MotorSports Audi.  Mike LaMarra will start the No. 73 Honda in fifth.

Two cars failed to take time during the session.  They were the No. 23 Fast MD Racing Audi and the No. 5 Alfa Romeo Giuletta TCR fielded by KMW Motorsports with TMR Engineering

The FOX Factory 120, which will serve as the 2019 season finale for the IMSA Michelin Pilot Challenge, is scheduled to go green at 1:25 p.m. EDT Friday.  The race will be streamed live at IMSA.com and FansChoice.tv.  Highlighted coverage of the race will air on NBCSN on Oct. 18 at 7 p.m. EDT.