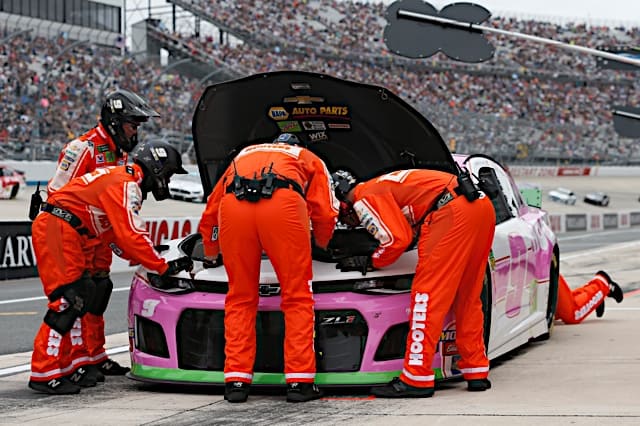 Chase Elliott began the Round of 8 on the wrong foot at Dover International Speedway Sunday afternoon (Oct. 6).

The defending race winner blew his engine on lap eight while running inside the top 10. Elliott was given a push to the garage, then the crew attempted to fix the issue for a few minutes before diagnosing that the car could not continue on the racetrack. Barring a disqualification, Elliott will finish 38th in the race, last in the running order.

“Yeah I just had an engine failure of some sort,” Elliott said after getting out of the car. “Unfortunately, we don’t really know what it was just yet. It just quit running. It didn’t really seem like anything was off. We were just kind of making laps and then obviously had a failure. It’s an unfortunate way to start this round for sure.”

Elliott leaves Dover with a potentially huge hole in the standings after scoring just one point for his efforts Sunday. He’ll need to either win or perform consistently well at Talladega Superspeedway and Kansas Speedway the next two weeks in order to advance to the next round of the playoffs.

Elliott was not the only playoff driver with early issues. Joey Logano missed the start of the race after driving his No. 22 Ford into the garage on the pace laps. After crew members fixed a problem on the rear end, Logano finally joined the race on lap 23.